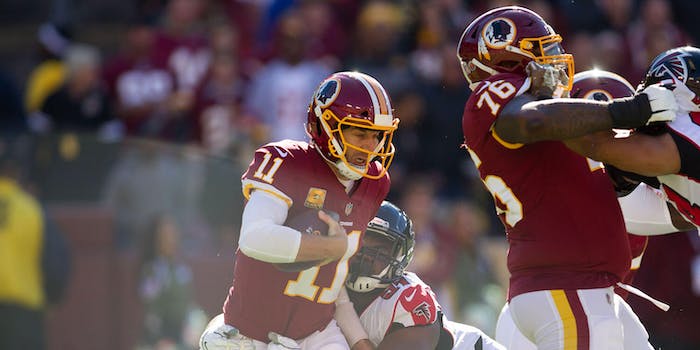 How to stream Bears vs. Redskins on Monday Night Football

Two struggling teams at the bottom of their respective divisions will try to cure their early-season woes on Monday Night Football.

For some teams, Week 3 can feel like a must-win game.

Expectations were never quite sky high for the Chicago Bears or the Washington Redskins going into this season, but both teams certainly hoped they wouldn’t be sitting at the bottom of their respective divisions so early on.

The unimpressive Redskins are 0-2, and the Bears are 1-1 after a win over an equally weak Broncos squad last week. Both teams are going to look to shake things up in Week 3.

For the Bears, the key is their quarterback play. Mitch Trubisky has to play better. The QB threw for just 120 yards last week, and is nursing a weak 58% completion percentage through two games. He has talent around him; he just isn’t using it.

On the bright side, Trubisky may not have to play perfect football for the Bears to line up a few wins. Safety Eddie Jackson had a stellar game last week, leading a defense that looks like it might be elite. Roquan Smith, Danny Trevathan, and Khalil Mack have also played well early this season.

Washington has even less to be optimistic about so far the season. Both of the Redskin losses have been divisional games, and it’s hard to see things getting better. The team is weak on both sides of the ball. The leaky ‘Skins defense is already third-worst in the NFL measuring by yards allowed.

Rookie wide receiver Terry McLaurin has shined as something of a lone bright spot in D.C., but Case Keenum is not a Super Bowl-caliber quarterback. Though Keenum has been serviceable through two weeks, a non-existent running game isn’t doing the journeyman any favors.

Neither team is playing pretty football at the moment, but you have to give the edge to a Bears squad that is at least doing something right.

Bears vs. Redskins live stream: How to watch MNF online

Both Sling Blue ($25 per month) or Sling Orange + Blue ($40 per month)  include NFL Network and a number of sports channels—like three ESPN channels, NBCSN, and FS1—and it’s still a nice perk that Sling subscribers can order a la carte packages. Sling TV also offers a special Latino package for bilingual viewers. Sling TV is currently offering a deal where you can subscribe for 40% off the regular price for the first month of your subscription. That means Sling Blue would cost $15, and Sling Orange + Blue would cost $25. (Here’s a complete guide to Sling TV channels and our Sling TV review.)
For $10 extra per month, you can get NFL RedZone via the Sling Blue Sports Extra package.

Bears vs. Redskins: Why it matters

These teams both need wins now. The Bears will see the Vikings, Saints, Chargers, and Eagles in the next six weeks. Washington will get the Patriots, 49ers, and Vikings in the same stretch. At a certain point, you have to wonder when the wins will start coming.

Neither team has a particularly elite offense, and some of their pass-catching and running options will have to step up if either team is going to hope for .500.

While the Bears defense is showing flashes of brilliance, that won’t matter if they repeat their three-point Week 1 performance again.

The Redskins should start finding out if first-round quarterback Dwayne Haskins gives them something to build around some game soon. Otherwise, it’s hard to imagine the Jay Gruden era ending on an impressive note.

If either team is going to dig their way out of their early-season slumps, the long march has to start against a soft opponent in Week 3.

The loser of this game will have 13 weeks of football left to play, and those could be some very long weeks without many wins to look forward to.