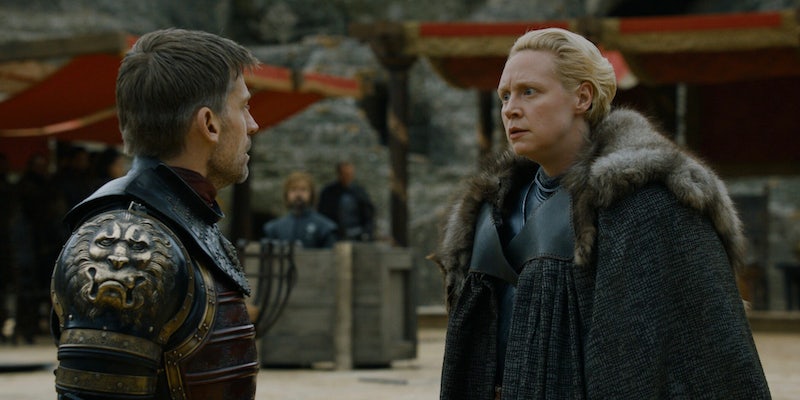 11 questions we have for ‘Game of Thrones’ for season 8

It can't cover everything, but here's what we want to know.

Warning: This article contains spoilers for Game of Thrones season 7 and speculation for season 8.

The Game of Thrones season 7 finale, “The Dragon and the Wolf,” left us with two major revelations on a personal and grand scale level.

On one hand, we finally got confirmation about Jon Snow’s parents and his claim to the Iron Throne while watching him fall in love with his (unknown to him) aunt Daenerys Targaryen. On the other hand, the Night King and an undead Viserion used blue flames to blow a big enough hole in the Wall for the Army of the Dead to enter Westeros. Amid the fantasy elements of dragons, White Walkers, and undead soldiers are the very human characters still moving around in Westeros, whether they’re trying to fight the dead or continue to fight amongst themselves.

The end is near. Season 7 was shortened from 10 to seven episodes, and season 8—the final season—will have even fewer at six episodes (although they may be much longer). The show has started paying off many of its threads this year, but with just six episodes left, it’s doubtful they’ll be able to tie up every loose end and answer every question. Still, we hope season 8 will not only give us a great end but answer some of our questions along the way.

1) Did Tormund and Beric survive the Wall’s destruction?

In a season finale where so much happened, it’s easy to forget that the episode’s only significant death was Petyr Baelish’s execution by Sansa and Arya Stark at Winterfell. But up at the Wall, we could possibly have a couple more new recruits for the Army of the Dead.

Beric Dondarrion and Tormund Giantsbane were on top of the Wall at Eastwatch-by-the-Sea as the Night King and Viserion destroyed it. Once they realized what had happened, they made a run for it along the Wall as other wildlings and Night’s Watch brothers fell to their deaths. (“It’s a long way down,” Beric helpfully reminded us before the Wall crashed apart.)

We didn’t see them again after those final moments—leaving their fates up in the air—and for now the actors are having a bit of fun with it on social media. If Beric and Tormund did in fact survive, they and the remaining survivors of that attack can probably run along the Wall to warn the rest of the Night’s Watch about the Night King. Their first stop? Castle Black.

2) Can Daenerys have children after all?

The past few episodes have been—more than most, anyway—pretty heavy-handed on the discussion around children and successors. With the exception of Cersei Lannister’s pregnancy and Tormund imagining the “great big monsters” he’d have with Brienne of Tarth, most of it has been focused on Jon and Daenerys.

Dany has long believed that she’ll never have children because of what Mirri Maz Duur, the maegi who killed Khal Drogo and Rhaego, told her in season 1. She called her dragons Drogon, Rhaegal, and Viserion her children—the only children she’ll ever have—and refused to talk about succession with Tyrion Lannister since she would have no heirs. The prophecy placed upon Daenerys is more thorough than what the show reveals, but Jon isn’t necessarily buying it.

“Has it occurred to you she might not have been a reliable source of information?” Jon asked Dany when she told him about her infertility.

Jon’s feelings may be less about her possible infertility (and problematic lack of an heir) and more about to the guilt he’d feel if he ever fathered a child out of wedlock. He grew up a bastard and never wants to curse a child with the same stigmas he faced. It’s one of the reasons Jon joined the Night’s Watch. He’s since left the Night’s Watch—his death having nulled his vows—and has risen to King in the North, but you get the impression that having children didn’t really occur to Jon until Jorah Mormont told Jon that he could pass Longclaw down to his children.

Of course, unbeknownst to him, he’s never been a bastard at all. He is, in fact, a legitimate Targaryen who possibly just procreated with his aunt.

With all of the hints and foreshadowing sprinkled in season 7, it’s more a question of when Dany will get pregnant rather than if, as well as what Jon knows about himself when he learns it.

4) How will Jon and Daenerys react to Game of Thrones’ big revelations?

Although most of us had figured it out well beforehand, Game of Thrones dropped three bombshells for viewers in “The Dragon and the Wolf” about Jon Snow. One, that Rhaegar Targaryen and Lyanna Stark are his parents—his biological dad is not Ned Stark. Two, Rhaegar and Lyanna secretly wed after Rhaegar got an annulment from his first wife Elia Martell. And three, Jon’s real name is Aegon Targaryen, the true heir to the Iron Throne.

We’re not sure if Bran is aware of the fourth—that Jon and Dany just had an incestuous encounter—but if they don’t fizzle out by the time they reach Winterfell, it’ll probably be an issue. Especially if Dany is pregnant when they find out.

The bigger issue will likely be what they do about the Iron Throne. Jon and Dany could solve everything by marrying each other, but we don’t know if Jon would accept those terms. He might not want the Iron Throne now, but as long as he lives he’s a threat to Dany’s claim.

As for Jon himself, the discovery of who he is is enough to shake the foundations of what he’s always known to be true. It’s possible he might end up having the identity crisis he talked Theon Greyjoy through during the most recent episode while grappling with the fact that the most honest man he ever knew lied to him his entire life.

5) What is Tyrion thinking when he sees Jon and Daenerys shacking up?

Tyrion may have teased Dany about her feelings for Jon in “Beyond the Wall,” but he doesn’t look thrilled at all after watching him enter her chambers from down the hall. Some have suspected that part George R.R. Martin’s original outline found its way into the show. Instead of a love triangle between Tyrion, Jon, and Arya Stark (the latter two being incest), it would now be Tyrion, Jon, and Dany.

However, Peter Dinklage suggested in a behind-the-scenes video that it was more about Jon and Dany screwing up the plans he had in place by letting their feelings get in the way.

Jon’s real name is a big revelation, but it loses its sheen a bit once you realize that’s not the first Aegon Targaryen in that family tree.

No, we’re not talking about the many Aegon Targaryens who ruled the Seven Kingdoms. Jon’s half-brother is named Aegon, so two of Rhaegar’s three children had the same name. (The third, Rhaenys, was a girl.)

Fans quickly put the blame on Rhaegar, who came off looking like an asshole this season, but we have no indication that Rhaegar had anything to do with naming Jon (or even knew that Lyanna was pregnant). And anyway, he died on the Trident before Jon’s birth. Elia, Rhaenys, and the first Aegon, were also killed, so the least you can say is that there weren’t two siblings named Aegon living at the same time.

Chances are, Aegon is a very Targaryen name that the audience will recognize (more so than maybe Aemon, the popular book candidate for Jon’s real name), so the show might’ve just ran with it.

7) How will they defeat the Night King and Viserion?

“Beyond the Wall” revealed that, theoretically, all they need to do is kill the Night King to defeat the Army of the Dead because as the top commander that would kill anything he’s turned or had control over.

And we know plenty about killing regular dragons, but does that apply when your dragon is undead, decaying, and capable of breathing blue flames?

Rhaegal and Viserion may have tolerated Tyrion’s touch long enough for him to remove their chains in season 6, but Jon is truly the first person aside from Dany to touch one of her dragons and live. Not only that, Drogon seemed to enjoy Jon’s touch almost as if he were a cat for Jon to pet.

Jon may be predispositioned—albeit not guaranteed—to be able to ride a dragon because of his Valyrian blood, and it’s not insignificant that he’s the only other Targaryen remaining. Dany’s already claimed Drogon to ride, but there’s still another that Jon could conceivably ride: Rhaegal, named after his father.

It could also help explain why Jon didn’t escape on Drogon with Dany and everyone else in “Beyond the Wall.” The show may have wanted to give that moment proper gravitas instead of having him jump on Drogon’s back along with Jorah, Tormund, Beric, and Sandor Clegane.

For years, fans have been holding out for the hype that was promised: a fight to the death between brothers Sandor (Hound) and Gregor Clegane (Mountain) known as CleganeBowl. It was first conceived as an answer to Cersei’s trial by combat (which would’ve taken place in season 6), but the crown got rid of trial by combat. And then Cersei took the crown.

Despite Gregor and Sandor finally being in the same arena again after several years apart, season 7 once again ended without them fighting to the death. But they finally spoke to one another—or rather, the Hound spoke to the Mountain while the latter stood there silently—and the Hound promised retribution.

“It’s not how it ends for you, brother,” Sandor said. “You know who’s coming for you. You’ve always known.”

Sandor doesn’t elaborate on who it is, but we can only hope he’s talking about himself.

With the show winding down there are far fewer candidates vying for the Iron Throne than usual, but it will still probably be on everyone’s mind even as a new and fragile alliance brings almost every surviving character up to Winterfell.

At the end of the season, Cersei still sits on the Iron Throne. Daenerys still wants it. Jon has the best claim but we have no indication that he would even take it (especially after he pledged his support for Daenerys). Sansa Stark has shown herself to be more capable and pragmatic than all of them combined. The Night King hasn’t staked a claim, but if he commands all of Westeros’ dead he could just as easily sit upon the throne. (Why not?) The underlying and potential threat of legitimizing Gendry (Robert Baratheon’s only living son) is that he could try to take it—even if he would in reality be more than happy taking up Storm’s End. If Jon and Dany have a child together (which seems likely at this point), that child could end up on the throne.

As Tyrion mentioned a couple episodes ago, democracy and Kingsmoot-esque elections could be on the table to pick successors. At this point, we don’t even know if the Iron Throne will survive the series.

The threat up north might kill them all, but for many of them, it’s still all about a single chair.