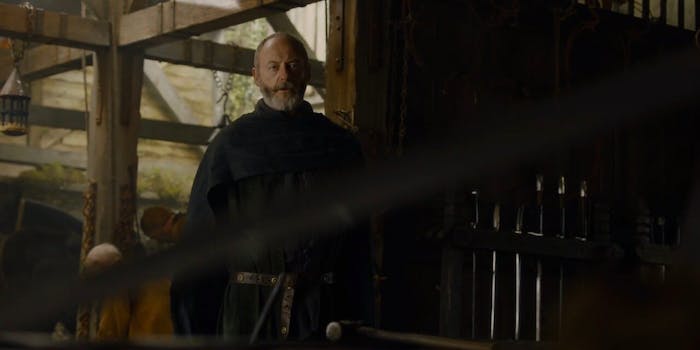 A long lost character returned to ‘Game of Thrones’ on Sunday

Fans were really happy to see him return.

Warning: This article contains spoilers for the most recent episode of Game of Thrones, “Eastwatch.“

A character long absent from Game of Thrones reappeared Sunday night, massive hammer in hand, to help the north in the coming war.

Gendry Waters, one of King Robert Baratheon’s many illegitimate children, was last seen back in season 3 as Ser Davos Seaworth pushed him out to sea on a small stolen vessel. The young blacksmith wasn’t seen again until he resurfaced in the episode “Eastwatch.”

In season 2, as rumors circulated about then King Joffrey Baratheon’s legitimacy, Joffrey sent his men on a killing spree to ensure no one could challenge his hold on the Iron Throne. Robert Baratheon’s promiscuity meant that Joffrey’s men had their work cut out for them. Though most Robert’s illegitimate children are killed, Gendry, on a caravan north with Arya Stark, managed to avoid Joffrey’s wrath, only to end up in the grasp of his uncle, Stannis Baratheon.

Stannis planned to let Melisandre use Gendry’s royal blood as a sacrifice to the Lord of Light, nearly leading to Gendry’s death in season 3. But Ser Davos—a good man through and through—could not stomach the thought of killing an innocent boy for the sake of dark magic. He helped to free Gendry and sent him away. The last we saw of him, he was paddling into the darkness on a lonely rowboat (an image that quickly became a meme).

Davos, the man who saved him from death all those years ago, sought out Gendry while in King’s Landing on Sunday, asking him to join the perilous mission north of The Wall. Gendry is now a grown man, and although he lost his token bull’s head helm, he made himself a hammer that looks an awful lot like the one his father used in battle to kill Prince Rhaegar Targaryen. Gendry’s reappearance was a welcome sight for fans, who definitely noticed his fourth-wall-breaking line about rowing.

The ragtag group heading north will likely thank their lucky stars to have the capable young blacksmith on their side, though their mission is a bleak one. It is hard to say what Gendry’s role in Jon Snow’s desperate mission will be, but if there is one thing that Game of Thrones has taught us, it’s to not get too attached.