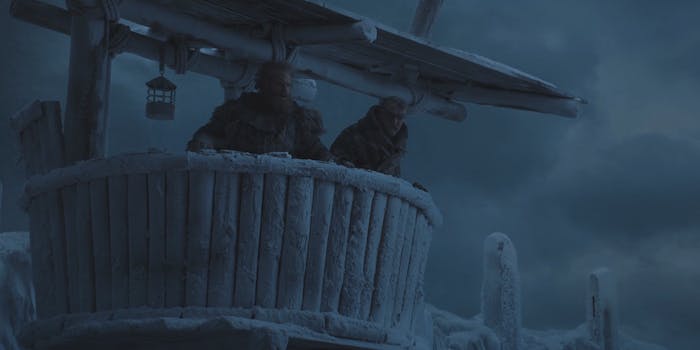 The unthinkable just happened on ‘Game of Thrones’

Warning: This article contains spoilers from the Game of Thrones season 7 finale, “The Dragon and the Wolf.”

Well, Game of Thrones did it. After standing the test of time and enemies both human and supernatural for 8,000 years, the Wall finally came down.

Eastwatch-by-the-Sea fell with ice and fire as the Night King—now riding an undead Viserion—directed his newly acquired dragon to just burn the whole thing down. Viserion looked ever the worse for wear, just like steeds ridden by the Night King’s White Walkers, but he was more powerful than ever as he attacked the Wall with nonstop blue flames.

Tormund Giantsbane and Beric Dondarrion, who stayed at the Wall while everyone else made their way to King’s Landing, watched in horror before directing everyone to run. If they don’t make it out alive, Bran Stark’s ravens will swiftly be able to alert everyone that the Great War is truly and finally here. It’s the living against the dead with no survivors.

For 8,000 years the Wall stood and did its duty. Measuring 700 feet tall and 100 leagues wide by the time we first saw it, it was built to protect men from the threat of the White Walkers after the Long Night. But through the ages, men forgot about the true threat; they chalked those legends up to stories told to children to frighten them. But as even Cersei Lannister finally learned this episode, it’s true. All of it.

No matter how many magical protections were placed on the Wall when it was first formed, nobody—not Brandon the Builder, the First Men, the children of the forest, or giants—ever took into consideration that a dragon could just melt it away with fire so cold it burns.

“The Wall’s kept these things out for 8,000 years,” showrunner D.B. Weiss explained in a behind-the-scenes clip after the episode. “There’s no real reason that it can’t keep doing that unless something puts a hole in the Wall. There’s one thing on the board from the beginning that is now big enough to do that, and that’s a dragon.”

We won’t see the aftermath of the Wall coming down until season 8, which could arrive as late as 2019. Bran has seen what happened through his ravens, so it’s only a matter of time before he alerts everyone. And when Jon Snow arrives with Daenerys Targaryen in Winterfell, the truth about his new relationship is far from the only piece of bad news he’ll likely receive.

Because now they have to uphold their oaths to protect the realm of men.