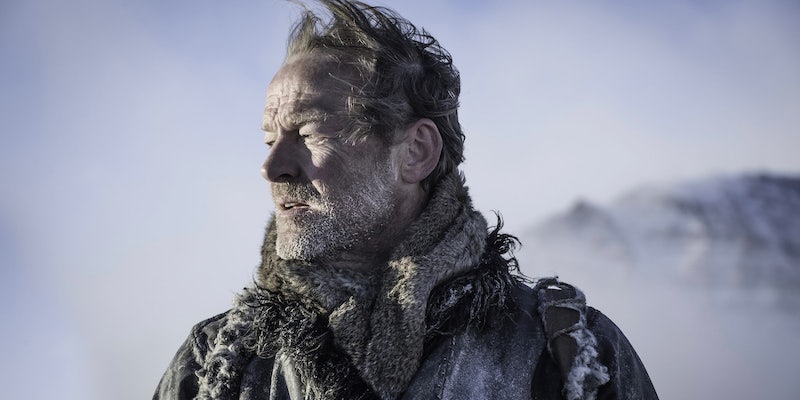 It was a Mormont prized possession for centuries.

Warning: This article contains spoilers for the latest Game of Thrones episode, “Beyond the Wall.”

With Game of Thrones’ fast-paced season, “Eastwatch” moved all of the pieces together so that the “Magnificent Seven”—Jon Snow, Ser Jorah Mormont, Gendry, Tormund Giantsbane, Beric Dondarrion, Thoros of Myr, and Sandor Clegane—could venture beyond the Wall to capture a wight. But in “Beyond the Wall,” fans finally got some of the conversations they hoped would take place last week—including one character trying to return a gift to another.

Jon and Jorah have traveled north together since leaving Dragonstone, but it wasn’t until they ventured beyond the Wall that they finally discussed their common link: like Samwell Tarly earlier in the season, Jon was loyal to Jorah’s father, Lord Commander Jeor Mormont, and wanted to do right by him. They reminisced about their fathers, but Jon wanted to return something that he felt belonged to Jorah.

“Your father gave me this sword,” Jon said. “Changed the pommel from a bear to a wolf, but it’s still Longclaw. Lord Commander Mormont thought you’d never come back to Westeros. But you are back, and it’s been in your family for centuries. It’s not right for me to have it.”

Jorah held it for a moment, but he didn’t want it. Jon felt that it should go to Jorah because he was Jeor’s son—and Longclaw had been a Mormont family heirloom for centuries—but Jorah had seen enough of Jon’s leadership (and his own shame) to know that blood didn’t matter anymore.

“I brought shame onto my house,” Jorah explained. “I broke my father’s heart. I forfeited the right to claim this sword. It’s yours. May it serve you well and your children after you.”

“A bloody dead man tried to kill me”

This well-intentioned (albeit poorly thought-out given the locale) gesture between Jon and Jorah echoes how Jon came into possession of the Mormont family sword in the first place. And like their trek up north, it involves wights.

In the season 1 episode “The Pointy End,” Jon had been sent to his quarters after he and Ser Alliser Thorne nearly came to blows. Despite his punishment, Ghost sensed something outside and led Jon into Jeor Mormont’s chambers. The door was open and all seemed calm until one of the dead men recovered by the Night’s Watch—who was in Benjen Stark’s ranging party—charged after Jon. A knife didn’t work on the man, so Jon tried his sword. By this time, Jeor Mormont had woken up in time to witness the dead man pull the sword out of his stomach and go forward. At his own personal risk, Jon grabbed the oil lamp Mormont carried and threw it at the wight, killing it.

Although Jon’s aunt Daenerys may be immune to fire, Jon was not, so he burned his hand by saving Mormont’s life. But Mormont—who Sam had already suspected chose Jon to groom him into a future Lord Commander—was grateful enough that he gifted Jon with a Valyrian steel sword named Longclaw.

“I thought a wolf was more appropriate for you than a bear so I had a new pommel made,” Jeor said. “It’s called Longclaw. Works as well for a wolf as a bear, I think.”

Jon, who knew of Valyrian steel and had witnessed Ned Stark use the Stark family sword Ice before, couldn’t accept something so rare and invaluable. Mormont, however, didn’t want to hear any of Jon’s protests.

“It was my father’s sword, his father before him,” Jeor Mormont said. “The Mormonts have carried it for five centuries. It was meant for my son Jorah. He brought dishonor to our house, but he had the grace to leave the sword before he fled from Westeros.”

Jeor hasn’t forgotten the fight between Jon and Alliser Thorne, but in this instance, he wanted to make sure Jon was properly rewarded for his selfless act. For perhaps the first time, Jon is commended for his bravery by his fellow brothers, and Longclaw has been by Jon’s side ever since. Even at the edge of the world.

The small but proud house of Mormont

Even before Valyrian steel was revealed to be one of the only weapons capable of killing White Walkers, it was a rare and valuable commodity in Westeros. The art of creating an item from it (whether weapon or maester chain) had been lost to time after the Doom of Valyria, and even the art of creating new weapons from existing swords—like the creation of Oathkeeper and Widow’s Wail from Ice—was something only a handful of people know. So the weapons that did exist were passed down family lines.

The Mormonts were in possession of one such item, a bastard sword called Longclaw. And like other houses, it passed down the family line. Jeor Mormont left it at Bear Island when he joined the Night’s Watch for Jorah to take it. However, Jorah wouldn’t remain Lord of Bear Island for long. He had married a woman with expensive taste, and in order to afford it, he took part in slave-trading, one of the worst crimes you can commit in Westeros. Having been discovered, Jorah lost his titles and fled to Essos so Ned—the lord he served—could not execute him. (Years later, Jon would be glad that Ned Stark was never able to execute Jorah for his crimes.) Jorah was in the wrong and he knew it. He found himself no longer worthy of a great Valyrian steel sword like Longclaw, so he left it at Bear Island. Jeor ended up getting the sword back to eventually give to Jon.

As Lyanna Mormont, Jorah’s niece and the current ruler of Bear Island, said in season 6, “We are not a large house, but we are a proud one.” And Jorah may have done shameful things before fleeing Westeros, but he knew better than to take Longclaw with him.

Jon is still grappling with his new life after the Lord of Light brought him back from the dead and he may have felt that he shouldn’t carry Longclaw any longer after Jorah returned to Westeros. But Jeor—and now Jorah—both saw something even greater in him. And although father and son may become estranged late in life, they both knew one thing: that Jon Snow was more than worthy of wielding Longclaw.