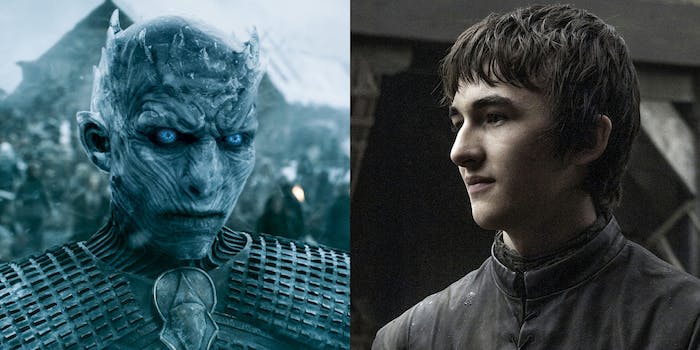 No, Bran Stark isn’t the Night King—here’s why

The evidence falls apart once you start to examine it.

Update 9:20pm CT, April 21: Since Game of Thrones season 7, the fan theory that Bran is the Night King has struck a nerve with fans despite its implausibility. But as the living prepare to meet the Army of the Dead in battle, Game of Thrones appears to have pinned a nail in that theory.

It happened on Sunday halfway through Game of Thrones‘ second episode of season 8 during a scene in which the living reviewed their battle plan. Bran, who had more insight into the Night King than anyone, revealed just what the Night King wanted—and wanted to do with Bran; because the Night King marked Bran with his hand, the Night King can track Bran wherever he goes.

“An endless night,” Bran responded. “He wants to erase this world, and I am its memory.”

The Night King wants to kill Bran Stark, whose mind contains the collective memory of Westeros, that much is clear. What would make much less sense is if the Night King was planning to kill himself—which would then prevent Bran from becoming the Night King in the first place…

The “Bran is the Night King” theory has had a long run on the internet, one of many, many theories that have captivated plenty of fans that have ranged from completely plausible and evidence-based to the absolutely absurd. Some of them are fun to imagine even if they may never happen in the show (shoutout to Cleganebowl) while others fall apart the minute you start to really look at it.

The “Bran is the Night King” theory, which first appeared after the season 7 episode “Beyond the Wall,” is credited to Reddit user turm0il26 and bounces off a Game of Theories video on the Night King’s identity, and it posited that Bran Stark is the Night King on the show. The Night King as a character and the leader of the White Walkers (also known as Others) doesn’t yet exist in A Song of Ice and Fire. The basic gist of the theory is that on multiple occasions, Bran has attempted to go back in time to try and save Westeros from the Night King and the Army of the Dead. Except every time he tries to stop the oncoming war, he screwed something up and eventually ended up trapped in the body of the future Night King.

His first attempt was to warn King Aerys II Targaryen (Daenerys’ father) about the threat up north, except the message became garbled and caused Aerys to go mad. The second attempt sent him back thousands of years to see how the children of the forest and the First Men defeated the White Walkers, but he missed his mark and ended up in the mind of Brandon the Builder, the man who built the Wall and founded House Stark. (It also leans a bit into the “Bran is every Brandon Stark in history” theory, which has been around long before season 7.) The third and final attempt took him back even further to when the children of the forest and the First Men were warring with one another, except that in his attempt to stop the war he became trapped inside the mind of the man who became the Night King. And via that connection, Bran would fulfill the Three-Eyed Raven’s proclamation that he would fly via the Night King riding an undead Viserion.

Some versions of the theory, which has spread beyond its original post into writeups by multiple entertainment websites, now point to how the Night King’s evolving appearance has made him look more like Bran’s portrayer, Isaac Hempstead Wright. Others compared their similar fashion choices and how they walk (or at least how Bran walks in visions).

Except, when you look at any of it beyond the text, it makes absolutely no sense. The evidence supporting this theory is flimsy at best even when viewed through wight-tinted glasses. And apparently, some fans have even gone as far as to Photoshop the Night King’s brooch on top of an outfit Bran started wearing once he arrived back in Winterfell.

Except those pictures are totally fake. Let’s be clear: Bran is definitely not the Night King.

Why Bran is not the Night King

A lot has happened since Bran and Meera Reed left the Three-Eyed Raven’s cave in “The Door,” even without taking Game of Thrones’ pacing issues into consideration. But the Night King’s origin story isn’t one of those things that we’re still trying to figure out: We saw how he was created last season.

In a vision, Bran and the Three-Eyed Raven witnessed Leaf, one of the children of the forest, approach a man—one of the First Men—tied up to a weirwood tree and stab him in the heart with a shard of dragonglass.

The White Walkers’ appearance has changed considerably since Game of Thrones’ very first episode. For the show’s first few seasons, the White Walkers had far less clothing on than we’re used to seeing in more recent seasons. The more clothed White Walker look came around season 4 in the episode “Oathkeeper” when a White Walker took one of Craster’s sons to the Night King, who turned him into a White Walker.

(Where did they get the clothes? Who knows! Perhaps they took pieces from their army of wights over thousands of years.)

It’s also when we meet the Night King for the first time, who has a more distinctive look than any of the other White Walkers. We get a much better look at the Night King in “Hardhome” as he towered over Jon Snow and the men trying to pull off a hopeless rescue north of the Wall.

Richard Brake portrayed the Night King in those two episodes in seasons 4 and 5, while Vladimir Furdik—the same man we see getting stabbed in Bran’s vision—has played him from season 6 to present day. According to Brake, the Night’s King prosthetics were molded off his face, and if the show did the same for Furdik when he took over the role, naturally the masks would look different.

As far as replacing a role goes, it’s one of the easier ones to do. The actor is completely covered with prosthetics and visual effects and doesn’t speak. All the character has needed to do (so far) is look terrifying and instill fear into our heroes, kill a raven and a dragon, and raise the dead.

3) Bran can’t change the past

A big part of the “Bran is the Night King” theory relies on Bran’s supposed failed attempts to change the past. The problem with that is, the one time that Bran actually meddled with time was an event that was always meant to happen.

Bran’s connection after the Three-Eyed Raven’s death—and Meera telling Hodor to “Hold the Door!”—caused Hodor to have a seizure and only be able to say “Hodor,” but Bran had only ever known Hodor to only say “Hodor” so his meddling was in a locked point in time. In time travel stories, this is what’s called a “consistent causal loop.”

Some fans also point to the first Tower of Joy flashback Bran sees in “Oathbreaker” after a younger Ned Stark turns his head after Bran shouted “Father” at him. Ned turned around for a moment, but he ran up into the tower toward his sister Lyanna. Bran realized that Ned couldn’t really hear him and his voice was nothing more than a faint whisper that could be easily mistaken for the wind.

BryndenBFish, a moderator of r/asoiaf and a critic of the “Bran is the Night King” theory, pointed to a similar scene that takes place in A Dance With Dragons when Bran tries to communicate with a young Ned Stark while in a vision.

When Bran speaks to Ned in ADWD, his voice is described as a whisper on the wind. Ned doesn't hear him. pic.twitter.com/Tir8mX2fgt

A partial version of this theory appeared last season after Bran witnessed Aerys II Targaryen, the Mad King, shout “Burn them all!” while sitting on the Iron Throne in a flashback. Bran’s multiple attempts to contact Aerys led to his madness—and eventually to Jaime Lannister stabbing him.

Aerys isn’t the first Targaryen to go mad. The Targaryen madness is kind of a family trait—something people suspect has to do with hundreds of years of incest—and not only did Aerys have it, Daenerys suspected her brother Viserys did as well. Aerys’ madness was a long time coming, starting with the Defiance of Duskendale and growing over the years as he became more paranoid. He heard tales of people who thought his Hand of the King, Tywin Lannister, was the real ruler of the Seven Kingdoms. He and his sister-wife Rhaella suffered multiple miscarriages and stillbirths. Toward the end of his life, he suspected his son Rhaegar was trying to put together a Great Council under the guise of the Tourney of Harrenhal—the same tourney where Rhaegar met Lyanna Stark—to remove him from power.

Besides, we already know Bran can’t affect time. And even if he could willingly, he saw what happened when he tried. He might be more Three-Eyed Raven than Stark at this point, but he probably wouldn’t attempt it again.

Bran is a warg, a type of skinchanger that can enter the mind of and control wolves and dogs. He could control his direwolf Summer and can now control an entire flock of ravens beyond the Wall. He also had the ability to control Hodor, which introduced the idea that a skinchanger or warg could hypothetically control humans. In A Song of Ice and Fire, such invasive control is seen by other skinchangers as the worst thing you can do.

As is the case with Bran’s time traveling, Hodor is a special case. Due to the seizure Bran helped cause, Hodor’s mind is much simpler than the average human. In the books, Hodor isn’t particularly thrilled with Bran taking control of his body, but eventually stops fighting him. In most other cases, it doesn’t really work that way.

The prologue of A Dance With Dragons is from the viewpoint of Varamyr, a wildling skinchanger Jon first meets when he’s a captive of Mance Rayder. As he’s dying from a stab wound, Varamyr attempted to take over the mind of his spearwife Thistle. Thistle doesn’t accept Varamyr skinchanging into her mind and fights him out of it, forcing him to skinchange into an animal.

The Night King, on the other hand, is a highly intelligent creature (and one who might have some powers of his own). Bran would’ve had a very difficult time taking over the First Man’s mind before the children of the forest changed him, but afterwards it would likely be impossible.

Bran may be powerful in his own right, but the Night King got the best of him on the two occasions they’ve interacted with each other. The first time, the Night King is able to see and touch Bran in an unsupervised vision. The second time is more indirect, but the Night King can not only sense Bran spying on him through a flock of ravens but break that connection. If he can’t even keep a connection with birds around the Night King, how on Earth could Bran successfully warg into the Night King’s mind without going mad?

Bran—now the Three-Eyed Raven—and the Night King are mortal enemies, but Bran isn’t fighting himself.