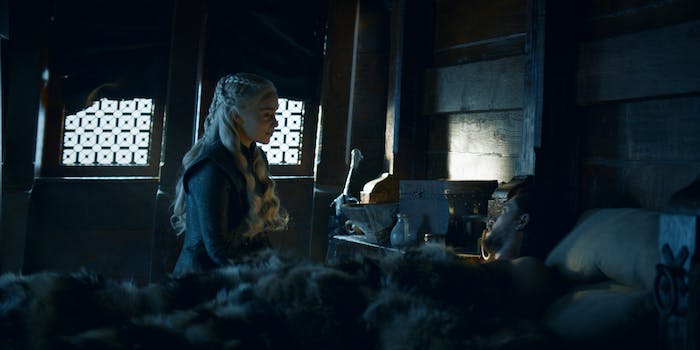 Some fans have been expecting this to happen for years.

Warning: This article contains spoilers for the Game of Thrones season 7 finale, “The Dragon and the Wolf.”

Before departing Westeros in “The Queen’s Justice,” the red priestess Melisandre told Varys that she had done her part and “brought ice and fire together.” She may have only meant that she successfully coordinated a meeting between Daenerys Targaryen and Jon Snow, but by the end of Game of Thrones season 7, it worked out better than she could’ve ever imagined. (Unless she saw it in the flames, of course.)

After several episodes of buildup—or several years for readers who’ve wanted or expected it despite the characters having yet to meet in A Song of Ice and Fire—Jon and Dany hooked up, bringing one of Game of Thrones’ few actual romances to fruition.

After getting Cersei’s word that she would send soldiers to fight the Night King and his army, Jon and Dany boarded a ship to head north to White Harbor before taking the Kingsroad to Winterfell.

The moment wasn’t the most important of the night—the destruction of the Wall by the Night King and Viserion claims that accolade. But fans will likely dissect it for months to come as they wait for the eighth and final season of Game of Thrones, tentatively slated to arrive in 2018 or 2019.

Is it love, lust, the groundworks for a political marriage, or a combination of the three? And what will happen when the incestuous elephant in the room is finally addressed?

The show (and the books) were always going to go there

In the aftermath of Jon and Dany’s hookup, some fans may argue that their pairing is too predictable or too cliché in a story known for subverting high fantasy tropes. But you can’t necessarily argue that it came out of nowhere.

“Beyond the Wall” director Alan Taylor revealed in interviews last week that George R.R. Martin told him back during the production of Game of Thrones’ first season that “Jon and Dany were sort of the point of the series.” Speaking to the Daily Beast, he pointed to their chemistry and the smaller moments used to build that relationship and added that “there’s no secret that this is where this is going.”

Although fans certainly know that now, it would’ve been a big shock to many fans who’ve become enamored with the rich and complex story involving hundreds of characters. Daenerys Targaryen has always been a queen and the Mother of Dragons with a continuously expanding list of titles. Jon Snow, on the other hand, started out as Ned Stark’s bastard son and rose up to become Lord Commander of the Night’s Watch and King in the North who’s actually the rightful heir to the Iron Throne.

Long before they met, Jon and Dany’s journeys have often run parallel, even though their circumstances and positions of power differed. They were both reborn from fire, they lost their first great love, and they rose as the chosen ruler of their people despite the many, many people who would rather see them dead. Some of these parallels are used to argue that Jon, Daenerys, or both of them are the Prince That Was Promised, the prophesied savior of Westeros. Melisandre clearly saw both of them being important for the great war to come.

The clearest piece of evidence for Jon and Dany coming together, however, comes from Dany’s visions in the House of the Undying in A Clash of Kings, which is also shown (but not as extensively) in Game of Thrones’ second season.

At one point, Dany—like she does in the show—sees the Wall while she is told of prophecies.

“A blue flower grew from a chink in a wall of ice, and filled the air with sweetness…. mother of dragons, bride of fire …“

Throughout ASOIAF, blue flowers are often a reference to Jon’s mother, Lyanna Stark, who received a crown of blue roses from Rhaegar Targaryen at the Tourney at Harrenhal. We haven’t seen as many blue flowers on Game of Thrones, but Petyr Baelish does reference “the crown of winter roses in Lyanna’s lap” in his telling of the tourney to Sansa Stark in season 5.

But with the flower growing in the Wall, fans interpreted it to reference Jon himself. And some took the other imagery from the passage—“filled the air with sweetness” shortly before she’s called a “bride of fire”—to allude to an eventual romance between the two.

Another passage from the House of the Undying stated that “three fires must you light … one for life and one for death and one to love …” and suggested that Jon could be the fire Dany will light for love—a possible reference to his identity as the Prince That Was Promised. He may, as some believed, also be the mount Dany rides “for love”; the other two rides listed were “to bed” and “to dread.”

“The Dragon and the Wolf” also cemented, as Bran Stark and Samwell Tarly put the pieces together, what many astute book and show fans have partially known for an entire season and learned in full a couple weeks ago. Jon Snow—whose true name is Aegon Targaryen—is the legitimate son of Rhaegar Targaryen and Lyanna Stark, who married in secret before Rhaegar’s death and Jon’s birth. Not only does that make Jon the rightful heir to the Iron Throne, but it also makes him Dany’s nephew. (Rhaegar was her older brother.)

In true Game of Thrones fashion, it finally gave fans something they wanted, while making it uncomfortably complicated: Jon and Dany’s relationship is incest, revealed with Bran’s vision and a voiceover cut with Jon and Daenerys in the throes of passion.

Neither Jon and Dany know this, so for now it was a one-time case of accidental incest. Plus, any union between two political players can be a fragile one—although Jon and Dany’s bond is probably stronger than most after she flew out to rescue him beyond the Wall. But sex always complicates things, and what will happen when Jon and Dany arrive in Winterfell?

There’s a lot at stake. Will the Northern lords accept Dany, whether as Jon’s queen or his wife (or both)? How will Sansa react to Jon basically doing what Littlefinger had suggested? And who will tell Jon the triple whammy of his parentage, his legitimacy, and the issue with his new relationship? Fans have presumed for some time that the incest factor probably wouldn’t bother Dany all that much considering her family history, but a northerner like Jon could have a much harder time coming to terms with it.

And on top of all of those personal burdens, the fate of Westeros still rests on his and Dany’s shoulders.