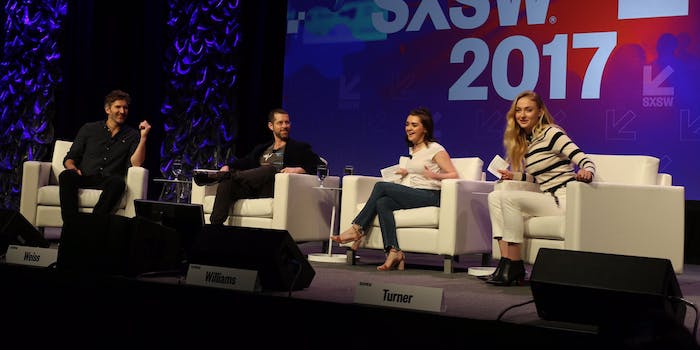 Confirmed: The last ‘Game of Thrones’ season is brutally short

Prepare to be sad.

Game of Thrones showrunners David Benioff and D.B. Weiss swooped onto the stage at SXSW Sunday to talk season 7 and beyond just days after HBO revealed the show’s premiere date and its first teaser.

Moderated by Game of Thrones stars Maisie Williams and Sophie Turner, the discussion didn’t reveal any major plot points or character beats of season 7, but with only a handful of episodes left until the end of the series, we still learned plenty from it.

Game of Thrones has been known for bringing in famous musicians and casting them in cameo roles for years now, but after much speculation on which artist would show up next based off of set reports, the showrunners announced this year’s contribution ahead of time. And pop fans are sure to recognize him: Ed Sheeran.

“We knew that Maisie was a big fan of Ed Sheeran and for years we’ve been trying to get him on the show so we can surprise Maisie,” Benioff said. “This year we finally did it.”

guess the cats out the bag… https://t.co/9GCDUp9HPN

There’s no word on where Sheeran will show up this season, but one fan has already Photoshopped him with Tormund Giantsbane’s massive ginger beard—and it works almost too well.

We’ve known for some time that Game of Thrones will only have seven episodes this season, but the count of six episodes for season 8—to total 13 hours for the final two seasons—was never set in stone until now. The show will wrap up with season 8 spanning six episodes.

“From the beginning, we’ve wanted to tell a 70-hour movie,” Benioff said, according to KVUE. “It will turn out to be a 73-hour movie, but it’s stayed relatively the same of having the beginning, middle and now we’re coming to the end.”

Benioff and Weiss also confirmed the writers for season 8 much earlier than they usually have in the past. Dave Hill will write the season premiere, Bryan Cogman will write the second episode, and they’ll be taking the remaining four episodes.

Episode 1: Dave Hill
Episode 2: Bryan Cogman
The other 4: Weiss and Benioff#SXSW #GoT

Hill has written episodes for seasons 5 and 6 and Cogman’s written at least one episode every season to date, while Benioff and Weiss have served as the show’s main writers. This confirms that George R.R. Martin, who hasn’t written an episode since season 4 in order to work on The Winds of Winter, won’t do so again. But it also extends the show’s abysmal record on the lack of women behind the scenes: a woman hasn’t written an episode of Game of Thrones since season 3.

If HBO does a spinoff, the Game of Thrones showrunners probably won’t be involved

Rumors have long swirled about whether a Game of Thrones spinoff—or a show taking place in that world—would happen at HBO; HBO original programming president Casey Bloys has said “we’re exploring it.” And given the massive success of Game of Thrones over the past seven years, it wouldn’t surprise Benioff and Weiss if one happened. But if it does, they probably won’t be involved with it.

“I think HBO might well do [a spinoff] and I’m looking forward to watching it,” Benioff said, per Deadline. “I think it’s better for them to get new blood in with new visions.”

With Game of Thrones’ lengthy hiatuses, fans have often observed and analyzed the finer details to the point where some of them obsessed over Kit Harington’s hair for months. But the idea of hair being a spoiler is not a new one, so some fans started to wonder if there was something behind Turner’s hair. (She’s a natural blond and dyes her hair for the show.)

“Her hair is still blond, so she’s dead,” Williams said, providing one of the panel’s awkward moments. Benioff attempted to deflect the tension.

Moment goes by, then Benioff says, "Don't worry, they won't tell anyone." Uncomfortable laugh from the audience. #SXSW #GameofThrones

Turner can always dye her hair back for season 8, if she were to appear, but the idea that Sansa is no longer safe just got real.

And when asked which cast members they’d bring back, the showrunners were in agreement. It’s Michelle Fairley, who played Catelyn Stark for three seasons, which also serves as a troll for book fans longing to see a loose thread reappear in the show.

Of course, if the showrunners actually make the Lady Stoneheart plot happen at this point—and we’re not holding our breaths too much—we definitely saw it coming.

One of the rumors surrounding the plot of season 7 is one of Daenerys’ dragons will be killed and turned into an ice dragon by the Night King. And although the showrunners wouldn’t confirm a plot thread so plainly, their response when asked if something like that was even possible is much more mysterious: “Maybe.”

Game of Thrones returns on July 16.