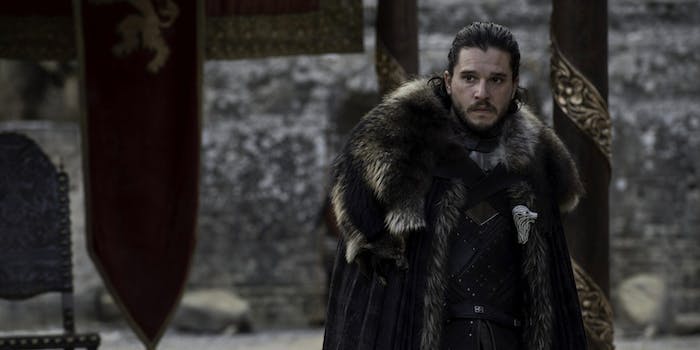 What this new information would mean for Jon and the rest of Westeros.

Warning: This article contains spoilers for the latest Game of Thrones episode, “The Dragon and the Wolf.”

Last year, the Game of Thrones season 6 finale revealed the identity of Jon Snow’s mother and answered one of the show’s oldest mysteries. And while the solution of Game of Thrones‘ most famous equation has been more or less solved, it took until “The Dragon and the Wolf” for the characters of Game of Thrones to finally add it up.

After arriving in Winterfell, Samwell Tarly met Bran Stark again for the first time in years. With two of the most knowledgeable people in Westeros together in one room, they were able to put the puzzle together. Not just R+L=J itself, but so much more. Bran had the parentage part of it down (Jon is in fact Rhaegar Targaryen and Lyanna Stark’s son) while Sam had the most important piece of the puzzle: Rhaegar and Lyanna were legally married after Rhaegar annulled his first marriage with Elia Martell, making Jon the rightful heir to the Iron Throne.

Considering that the people left in Westeros will soon have the Night King and his entire army on their doorstep, it might not seem like that big of a revelation. After all, why does Jon’s parentage matter now?

As personal as it might be for Jon whenever he finds out, it will change his relationship with everyone he knows. It’s also much bigger than him. All of Westeros fought a war because of his parents, and the truth of his origins will come as shocking news.

R+L=J is officially confirmed in full

For many fans of the books and the show, R+L=J had already been confirmed with Bran’s vision at the Tower of Joy in the season 6 finale. HBO didn’t need to explicitly say that Rhaegar was Jon’s father; it was heavily implied given their past history and the many, many scenes hinting at it even in the show. The official HBO Viewer’s guide also clearly stated that Jon Snow was the son of Rhaegar Targaryen and Lyanna Stark as recently as “Beyond the Wall.” However, it wasn’t as clear-cut with some members of the Game of Thrones cast, who mostly stuck with what the audience knew: the Lyanna factor.

Some fans theorized last season that Robert Baratheon, Rhaegar’s father Aerys, or even Lyanna’s brother Ned Stark may be Jon’s biological father, but the season 7 finale sealed the fact that it was Rhaegar. (Also, three incestuous relationships in one episode may have been pushing it.)

Bran told Sam that Jon and Daenerys Targaryen were on their way to Winterfell, and Jon needed to know the truth about himself.

Sam, however, knows something even Bran hasn’t been able to see yet. Between Oldtown and Winterfell, he finally got to reading what Gilly revealed to him about the annulment that High Septon Maynard gave to a “Prince Ragger.” Sam put the pieces together to figure out that Maynard annulled Rhaegar’s marriage to Elia Martell so that Rhaegar could marry Lyanna.

Bran was able to see what Sam told him in his vast archive of memories, now that he knew where to look. It was a secret wedding ceremony with no witnesses other than High Septon Maynard and very reminiscent of Robb Stark and Talisa Maegyr’s wedding at the end of season 2—another marriage based on love with dire consequences for everyone around them. Rhaegar and Lyanna professed their wedding vows to one another in accordance to the Faith of the Seven as Maynard tied their wrists together, and they kissed each other.

Bran’s vision also proves once and for all that while Rhaegar may have been many things, but he wasn’t a kidnapper or a rapist. He and Lyanna ran away together, and the Seven Kingdoms paid for it.

“Robert’s Rebellion was built on a lie,” Bran explained. “Rhaegar didn’t kidnap my aunt or rape her. He loved her. And she loved him.”

Even if he had found out, Robert Baratheon would have never believed that his betrothed, Lyanna Stark, would willingly run away with Rhaegar Targaryen. Rhaegar and Lyanna’s marriage may have been a happy one, but it was a short one that would lead to both of their deaths: Rhaegar’s at the Trident and Lyanna’s some time later at the Tower of Joy shortly after giving birth to Jon.

It also hits an even bigger point: In Bran’s eyes, Jon Snow, and not Daenerys Targaryen, is the true heir to the Iron Throne. He was never a bastard after all.

Jon’s real name is fitting for a Targaryen

As far back as the season 6 finale, some fans sensed that despite seeing the extent of Ned’s promise to Lyanna, Bran’s vision was holding something back. As Lyanna laid dying and covered in her own blood, she made Ned promise to protect her son because “if Robert finds out, he’ll kill [him]—you know he will.” But she also said in the faintest of whispers, “His name is—” before the scene cut out.

It didn’t take long for fans to read Lyanna’s lips to determine that she’s saying the “ae” sound, a signature part of many traditional Targaryen names. That thread fueled further speculation after Empire Magazine published in a pre-season 7 feature with the Game of Thrones cast stating that Jon’s real name was Jaehaerys Targaryen. Some book fans have believed for awhile that Jon’s real name (at least in the books) is actually Aemon Targaryen and named for Aemon the Dragonknight, a Targaryen and Westerosi hero Jon would pretend to be while playing with swords with his cousin Robb Stark.

But Lyanna didn’t name Jon after a peaceful and wise king or his great-grandfather who was cut from the show. She also didn’t name him after a famed hero. She chose a much simpler name that would give Jon an even heavier cross to bear than he already has. His real name is Aegon Targaryen, the same name that his older half-brother bore as well as numerous Targaryen rulers.

Westeros’ history is full of Aegons big and small, weak and powerful, and every which way in-between. The most famous among them is Aegon the Conqueror, the Targaryen king who took the Seven Kingdoms with his sister-wives Rhaenys and Visenya and their three dragons. Other Aegons didn’t quite live up to those expectations and found themselves fighting wars among themselves, guilted by that fallout, or ensuring generations of war to come with the legitimization of many bastard children.

Aegon V Targaryen, the last Aegon Targaryen to sit on the Iron Throne, was beloved by the people but not so much by powerful lords. But he died tragically in a great fire involving dragons on the same day his great-grandson Rhaegar was born. If Jon were to embrace both his name and his claim, he would be known as Aegon VI Targaryen.

But after seven seasons, it might be hard for Jon to embrace any name other than the one given to him by Ned Stark.

What does this all mean for Jon and the rest of Westeros?

Proving that Jon is the legitimate son of Rhaegar and Lyanna will be difficult; not everyone will believe a teenager can see the past and present, especially the maesters at the Citadel. It might not even matter in the grand scheme of things if Jon doesn’t want the Iron Throne. And Cersei Lannister, who already wants Jon dead as the bastard king who pledged to fight for Daenerys Targaryen, might react with more fury if face-to-face with the son of the woman who doomed her to an unhappy marriage with Robert Baratheon from the start.

The bigger payoff in the long run will likely be the emotional one. At the end of “The Dragon and the Wolf,” Jon and Dany were en route to Winterfell to finally reunite him with the rest of his wolfpack, but that’s not the only thing that awaits him.

The biggest question about Bran and Sam’s discovery now is how Jon and Dany will react to it, especially after they consummated their relationship on a ship heading north. Bran may have told Sam about Rhaegar and Lyanna’s story, but it’s just as much Jon and Dany’s story, except now there’s accidental incest involved. (In case you find the family tree hard to follow, the showrunners explicitly state that Dany is Jon’s aunt in a behind-the-scenes video.)

What do they do with that information? How will Dany react to finding out that the King in the North has a better claim to the Iron Throne than she does? How will Jon react to discovering the woman he fell in love with is actually his aunt? Could Drogon sense the Targaryen blood in him? And none of that covers the massive identity crisis Jon will probably have on his hands about his heritage as the Army of the Dead makes its way south unimpeded.

For Jon’s entire life, he believed his father was Ned Stark, a good and honest man to a fault, but Jon will soon discover that his entire relationship with Ned, who we now know is his uncle, was based on a lie. (A lie Ned made to honor his promise to his dying sister, but still, a massive lie for someone known for honesty.)

Perhaps to come to terms with it, Jon may recall a conversation he had with Theon Greyjoy, a once-hostage of House Stark who was an outsider in Winterfell like Jon. Even now, Theon grapples with what he did to betray the Starks and dishonor Ned’s memory, but as Jon pointed out, he never really lost Ned completely. Jon forgave Theon for the wrongs things that he could, while giving him a much-needed pep talk about how he could embrace both of his families: the one he was born into and the one who raised him.

“Our father was more of a father to you than yours ever was,” Jon told him. “But you never lost him. He’s a part of you. Just like he’s a part of me. You don’t need to choose. You’re a Greyjoy, and you’re a Stark.”

Jon is a Stark and Jon is a Targaryen. To defeat the forces up north he may, before the end, have to come to terms with his own identity. Having the time to have a proper existential crisis about it might have to wait for the summer, because Winter is here.