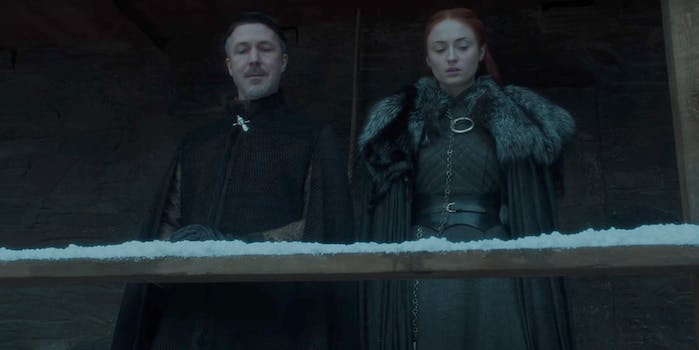 ‘Game of Thrones’ most resilient meddler finally got what he deserved

He didn't see this coming—but he should have.

Warning: This article contains spoilers from the Game of Thrones season 7 finale, “The Dragon and the Wolf.”

As brutal as Game of Thrones is with its willingness to kill major characters, a few have used cockroach-like survival capabilities to weasel out of every tight spot. Petyr Baelish is the poster child for such maneuvering.

Yet on Game of Thrones on Sunday, Littlefinger couldn’t wriggle out of what turned out to be his final predicament. After the Stark siblings proved resistant to his meddling, Littlefinger planted an incriminating letter for Arya to find and create tension between her and Sansa. He suggested earlier this season that the lady knight Brienne could protect Sansa from Arya. Perhaps he hoped a scuffle could rid him of the deadly and unpredictable younger Stark girl, leaving him free to rebuild his tenuous relationship with Sansa.

But that plan backfires when Sansa uses Littlefinger’s own motivation game against him. She realizes it wouldn’t make sense for Arya to want to kill her to become the lady of Winterfell; Arya has never wanted to be a lady in her life. Littlefinger, on the other hand, had plenty of reasons to sow malice between the sisters.

The show has Sansa come to this conclusion off screen, so viewers are just as surprised as Littlefinger when Sansa has Ayra brought to the great hall only to announce charges against Littlefinger instead. She accuses him of murdering their aunt, Lysa Arryn, which Sansa witnessed in person, and for conspiring to kill Jon Arryn (Lysa’s husband, who had discovered Cersei Lannister’s incestuous secret all those years ago). Sansa points out Littlefinger lied about the knife used in Bran‘s attempted murder, which started the bloody conflict between the Starks and the Lannisters. It also led to the false charges against her father, Ned Stark, and his eventual execution.

While Sansa may have known some of this already, Bran helped fill in the gaps, repeating Littlefinger’s words to Ned Stark back to him. “You said, ‘I did warn you not to trust me,'” he recites. As Littlefinger realizes he’s not getting out of this, his clever words fail him, and he snivelingly reminds Sansa that he loved their mother—that he loved her. Whether it was an act to win pity or show genuine fear and regret, Littlefinger’s pleas go unheard. Arya performs the execution, neatly slicing Littlefinger’s neck open with a wound that let him suffer a few seconds before he died.

After watching Littlefinger expertly maneuver though dicey politics in King’s Landing and take control of the Eyrie, his death felt anticlimactic for some fans. We’re used to Littlefinger playing the long game, serving his own selfish purposes by pitting those in power against each other. The no-name son of a minor lord didn’t work his way up to being Westeros’ master of coin by accident. Yet this season Littlefinger lost some of that manipulative magic, lamely hanging around Winterfell and fighting an uphill battle to win favor with Sansa, who barely tolerated his presence. (He was directly responsible for her horrific marriage to Ramsay, after all.) The old Littlefinger might have seen the writing on the wall, but for some reason he became complacent. He arrogantly underestimates Sansa—and pays for it with his life.

There is still some poetic justice in Sansa’s order to have Littlefinger executed after he caused her and her family such pain. Without Littlefinger’s meddling, the Starks may well have been facing the winter as a united household prepared to help their people survive.

As it is, the Starks are barely holding things together. And little do they know, everything is about to get so much worse.