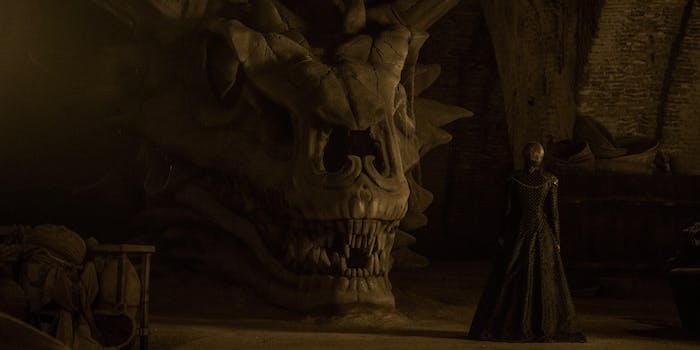 How do you kill a dragon on ‘Game of Thrones’?

Warning: This article contains spoilers from Game of Thrones seasons 7 and 8.

Update 10:08pm CT, May 5: When Daenerys Targaryen first arrived in Westeros in Game of Thrones season 7, she brought three large dragons with her. But more than halfway through season 8, only one dragon is still standing.
Rhaegal survived the Battle of Winterfell with a damaged wing only to fall in Sunday night’s episode. As Dany and her fleet arrived at Dragonstone, they were ambushed by Euron Greyjoy’s fleet. With a portable scorpion on his ship, Euron struck Rhaegal with three scorpion bolts—twice in the chest and once in the neck. Although Drogon survived a scorpion bolt last season, the third one through Rhaegal’s proved to be too much.

And poor Viserion died twice: first at the hands of the Night King’s icy spear in season 7’s “Beyond the Wall.” The Night King wasted no time in resurrecting the dragon for his own bidding and to take down the Wall. And then when Arya killed the Night King in “The Long Night,” Viserion went down with him.

Before then, Dany’s dragons seemed to be untouchable for the better part of Game of Thrones; they’ve been both her calling card and trump card. They burned her enemies and made her something of a living legend as the Mother of Dragons. They flew across the Narrow Sea to help her conquer Westeros. While Drogon is clearly Dany’s favorite—as well as the biggest dragon—Rhaegal and Viserion (who were locked away in Meereen for nearly two seasons) have been still fully capable of wreaking havoc. No matter how many lords and men Cersei has fighting for her, they’re no match for dragons.

“She has three full-grown dragons, your grace,” Randyll Tarly told Cersei. “The same as Aegon when he conquered the Seven Kingdoms. How do you propose to stop them?”

Qyburn, who’s something of a mad scientist, has a solution up his sleeves. He’s convinced that dragons aren’t invincible and has the “finest artillators and blacksmiths in King’s Landing” working on a solution after hearing of Drogon’s injuries in Meereen.

That solution: A contraption that can shoot gigantic, metal arrows. It’s a weapon that has also appeared in our world; called a scorpion, it was used in ancient Rome. The one Qyburn built is powerful enough to pierce the skull of Balerion the Dread, the dragon Aegon rode to conquer the Seven Kingdoms. Both the weapon and its target are stationary when we see it demonstrated, but we imagine it could rotate and move around if put into action outside of the Red Keep. It’s also unclear how many of these machines Qyburn has laying around.

Of course, it was always possible to defeat dragons in Westeros—all Cersei and Qyburn had to do was look at history. Out of all the dragons who lived in Westeros since the Targaryens initially brought five to Dragonstone hundreds of years ago, only Balerion actually died of old age at around 200 years old. All of the others were killed (most during the Dance of the Dragons, the Targaryen civil war). Dragons had not been seen in Westeros for around 150 years before Dany arrived on Dragonstone.

Dragons can be killed by other dragons

Many of the dragons Dany’s ancestors owned were killed by other dragons. The Targaryens were often at war with one another during their nearly 300-year reign in Westeros. They’d fight among themselves, using their dragons as weapons.

About nine dragons died directly at the hands of other dragons and their riders during the two-year fight over the Targaryen order of succession. Many of those deaths occurred in the dragonpit of King’s Landing.

A Game of Thrones season 5 Blu-ray extra features several of the show’s actors telling the detailed (and lengthy) story of the conflict, which is only hinted at in the show by Shireen Baratheon in the episode “The Dance of Dragons.” After that civil war, Shireen told her father Stannis, the Targaryens “never truly recovered.”

Granted, getting Dany’s dragons to eliminate each other isn’t really a defense option for King’s Landing right now. Dany has the loyalty of all three dragons, and Cersei alone isn’t going to get them to turn on one another.

Dragons can be killed by weapons

A dragon’s skin may be hard to pierce, but it is possible. They’re killed with spears, an axe to the head, arrows shot to put on dragon out of its misery, and murdered by a human mob (though what weapons the mob carried remains unclear). But more than one dragon was slain or seriously injured by using a scorpion or crossbow bolts.

Although Dreamfyre, a dragon who died during the Dance, was ultimately crushed by the dragonpit’s crumbling dome, she was first blinded when a crossbow bolt hit her in the eye. Although Stormcloud wasn’t directly involved in the fight, he also died during the Dance. He suffered fatal injuries as his rider—the future Aegon III Targaryen—tried to escape capture; Stormcloud was hit with several arrows as well as a scorpion bolt to the neck.

Meraxes, the dragon of Aegon’s sister and wife Queen Rhaenys Targaryen, also died after a scorpion bolt hit her in the eye during the First Dornish War. It isn’t clear if Game of Thrones would go that far into Westerosi lore in the show, but Meraxes was one of the three dragons Aegon used to conquer Westeros, proving early on that dragons aren’t invincible.

Can dragons be killed by supernatural means?

The Doom of Valyria killed all of the dragons still in the ancient kingdom that was once home to the Targaryens, but could a new threat come from the north?

Some Game of Thrones and A Song of Ice and Fire fans have speculated for years about whether an ice dragon will show up at some point. How it could happen is up in the air—and some versions of the theory rely on a non-canonical children’s story George R.R. Martin wrote about ice dragons. In one iteration of the theory, Melisandre (in a roundabout way) attempts to kickstart the Azor Ahai prophecy with a sacrifice that produces an ice dragon. Daenerys—reborn in fire—rides fire dragons, Jon—reborn in the frozen north—would ride an ice dragon.

Others believe that a pool of water at Winterfell will form an ice dragon that Bran Stark will be able to warg into, fulfilling the original Three-Eyed Raven’s proclamation to him at the end of season 4: “You will never walk again, but you will fly.”

And a third iteration of that theory relies on a Reddit thread that contained a number of supposedly real plot points. You can read about it in more detail over here, but basically it claimed that one of Dany’s dragons would die and come back as an ice dragon. Yeah, the thought of it is terrifying—and at SXSW Game of Thrones showrunner David Benioff didn’t rule out it was possible after he responded with a “maybe” when asked if it a White Walker could control a dragon.

If that were the case, it would be a major blow for Dany, who’s still unaware of the threats to come, and for everyone who hopes to rely on her dragons to help defeat the great enemy.