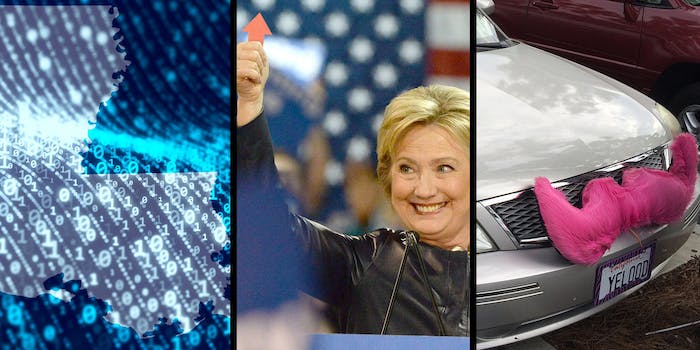 Important news you may have missed on Friday, Sept. 23.

When Reddit users discovered someone asking for help scrubbing the email address of an unnamed “VERY VIP” person from a bunch of archived emails was going by the same handle used by a network specialist who worked on Hillary Clinton‘s private email server, it triggered a maelstrom of speculation. The House of Representatives Oversight Committee and House Science Committee are giving those online sleuths the equivalent of Reddit Gold by launching inquires into the posts. “If true, these details raise new questions as to whether Platte River Networks purposefully defied legal documentation requirements,” wrote Science Committee Chairman Lamar Smith (R-Texas) in a letter. “Further, it is unclear if the Federal Bureau of Investigation was aware of these facts at the time of their investigation.

Donald Trump's hotel chain has agreed to pay a $50k settlement after its guests' data was hacked twice. This is its actual website right now pic.twitter.com/LifY9BF1RD

Your Snapchat dick pics may disappear, but your vote in the 2016 presidential election is forever. Now you can register to vote on Snapchat in under a minute.

Over 2.9 million Louisiana voter records leaked online due to what may be a massive database error related to door-to-door canvassing. Information from as recently as February of this year was included in the Louisiana leak, along with personal information, like addresses and phone numbers and even demographics. Perhaps even more troubling is the fact that the information is legally up for grabs for anyone with the money. “The price for buying voter data comes out at $0.01 per name on the list,” a MacKeeper spokesperson told the Daily Dot.

Under a bill that was just approved by the House of Representatives, federal employees would finally be able to get reimbursed for using ride-hailing services like Lyft and Uber because it’s 2016.

Are you a huge nerd who likes nerd things such as technology and old-timey video games? If you’re reading this, of course you are. Please go down the rabbit hole of this tweet. It is fantastic.

You are in a startup. All around is a burning runway. There are exits to the North and East. You have a bootstrap. There is a VC here.

Remember when Facebook said the future was in video and they had the numbers to prove it? It turns out they were totally lying the whole time by inflating viewership statistics by as much 80 percent. Those whole live by the Zucc, die by the Zucc.

“After many months of careful consideration, of prayer and searching my own conscience, I have decided that on Election Day, I will vote for the Republican nominee, Donald Trump,” Texas Sen. Ted Cruz wrote in a Facebook post. Previously, the erstwhile GOP presidential hopeful neglected to endorse Trump in his speech at the Republican National Convention. Cruz’s reticence to endorse Trump either had something to do with the shifting calculus of Cruz’s long-term presidential ambitions or that Trump suggested Cruz’s father was involved in the assassination of President John F. Kennedy.

This race is simple. Donald Trump and Hillary Clinton are both big government liberals.

Food delivery service Seamless went down on Thursday night and the entire city of New York was unable to feed itself and died. RIP NYC, you had the magical ability to simultaneously be extremely expansive and also smell like trash. New York City is survived by the city of Boston, which is worse in every measurable way.

The #FlamingCactusChallange is exactly what you think it is.

KrebsOnSecurity hit with record DDoS attack. Akamai: Someone has a botnet with capabilities we haven't seen before https://t.co/MQketE3nWN

KrebsOnSecurity hit with record DDoS attack. Akamai: Someone has a botnet with capabilities we haven't seen before https://t.co/MQketE3nWN

Forty-six percent of respondents to a recent poll believe that Donald Trump will deploy a nuclear weapon if elected president.

A trio of Arizona cops have resigned after making a teenager they caught with marijuana eat all of it. There are have been no reports on whether the snozzberries did, in fact, taste like snozzberries. –via Vice

Why are you doing anything other than listening to this previously unreleased David Bowie album recorded between 1973 and 1975? What’s wrong with you?

.@MelBrooks pretends to pull President Obama’s pants down after he receives National Medal of Arts at White House. pic.twitter.com/tT6YFuokb3