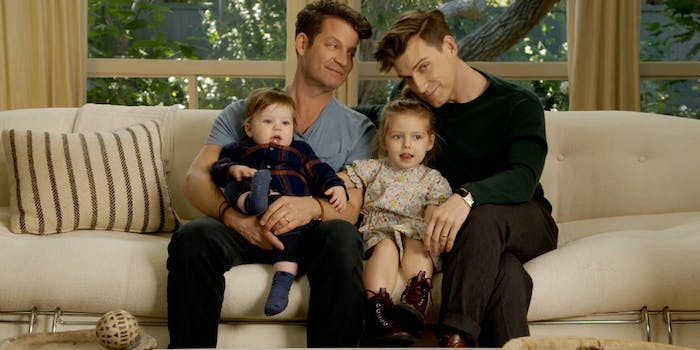 How to watch ‘Nate & Jeremiah By Design’ online for free

Nate Berkus’ interior design skills are so posh, he’s probably on Oprah Winfrey’s speed dial. His husband and fellow interior designer Jeremiah Brent is equally talented, with features in Architectural Digest and Harper’s Bazaar. Together, they make an interior design dream team and the fascinating subjects of Nate and Jeremiah By Design.

In this creative series, the couple help homeowners fix renovation disasters the best way they know how, cementing their status as a #Goals couple. Between beautifying homes, they juggle their relationship and family life with daughter Poppy and son Oskar.

When does Nate & Jeremiah By Design season 3 air?

The first episode of Nate & Jeremiah By Design season 3 premieres on Saturday, April 13, at 9pm ET.

What channel is Nate & Jeremiah By Design on?

How to watch Nate & Jeremiah By Design for free

TLC is available on a handful of the major live TV streaming services. When trying to decide which one is best for you, you’ll want to weigh the cost, the other channels you’ll receive, and the compatible devices for streaming. Thankfully, no matter which service you pick, you’ll start with a one-week trial, so you can watch Nate & Jeremiah By Design for free.

For a more à la carte service, look to Sling TV. It offers two cable packages, Sling Orange and Sling Blue, both of which cost $25 per month.TLC is available on either package but if you grab them both (Sling Orange + Blue) you can save $10 per month. If you only want one channel, Sling Blue offers more bang for your buck with over 40 channels, including sports necessities like FS1, NBCSN, and NFL Network. You’ll also gain access to the usual cable mainstays like Food Network, Discovery, Cartoon Network, Syfy, and FXX. Here’s the complete guide to Sling TV channels.

Philo is the least expensive streaming service, but it has some limitations. You won’t find the sports channels that dominate other packages or local channels. However, it’s the cheapest way to gain access to TLC at only $16 a month. You will also find the best deal on popular channels like Animal Planet, AMC, Lifetime, and even deep cuts like IFC and ID. You also get free cloud DVR, but shows recorded are deleted after 30 days, so binge responsibly. Here’s the complete list of Philo channels.

If you have a PS4 and are into the idea of having your gaming and streaming needs met in the same place, PlayStation Vue is made for you. Still, you don’t need a PS4 to enjoy this service. You can also use a Roku, Amazon Fire devices, and even Kodi. Plus, you’ll get awesome channels like AMC, BBC America, and Bravo in PlayStation Vue’s entry-level package. One subscription works with up to five devices, all with unlimited cloud DVR storage, which makes it one of the most binge-friendly solutions. Here are all of PlayStation Vue channels.

How to watch Nate & Jeremiah By Design episodes

Seasons 1 and 2 are available to purchase on Amazon Video starting at only $1.99 an episode. Entire seasons start at only $9.99.

TLC offers the ability to live stream the channel or watch its programs on-demand directly on its website. You will need a login from either a cable provider or one of the services from above, except Sling TV which will not work.

The TLC Go app works just like streaming on the site. Simply log in with your credentials and stream on-the-go or on your favorite streaming device.