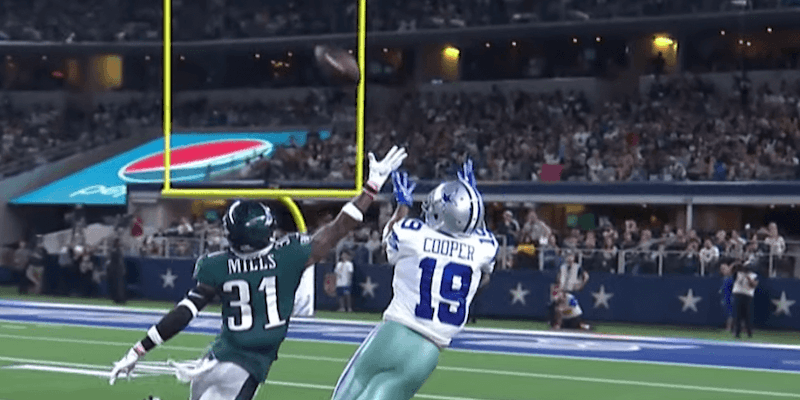 Cowboys vs. Eagles preview: Because somebody has to win the NFC East

Someone has to win the NFC East. Here's how to watch it in real time.

After 14 weeks of the 2019 NFL season, the Dallas Cowboys and Philadelphia Eagles both sit at .500 record, rocking 7-7 records. Both teams have had Sisyphean campaigns with exactly as many ups as downs, and yet both can win the division and go to the playoffs.

You know, if either of them really want to.

The NFC East has been awful this year. Going into Week 16, the division has two 7-7 teams and two 3-11 teams. And because the division features four major media markets, their mediocrity is our mediocrity. This Cowboys vs. Eagles matchup is Fox’s “America’s Game of the Week.”

And isn’t that what America deserves?

As any NFL fan knows, the league is divided into divisions. No matter how bad a division may be, one team from each division gets to go to the playoffs. This year, that means the Titans and the Rams, who currently have winning records, may spend the postseason at home while one of these squads “earns” a postseason berth.

Both the Cowboys and the Eagles have had disappointing seasons, but Dallas fans have been treated to a particularly hellish ride this year. They have watched their insanely productive offense sabotaged by coaching, by other phases of the game, and by themselves. Even kicking and special teams has lost this team games as Jason Garrett continues to prove himself among the most inept play-callers in the NFL.

They’re still number two in offensive DVOA, despite everything else not going to plan. But boy, have lots of things not gone to plan.

Rarely see lineman cuss out the play caller from the field. Cowboys center Fredrick is clearly upset after the Cowboys 3rd n 2 run late in the game. Not blocked well by LG but clearly not happy with the call. pic.twitter.com/suDcRNqc6E

Here’s the Cowboys forgetting to call a timeout when they only have 10 men on the field.

Short a player, the Cowboys didn’t call a timeout. (They didn’t use any of their three timeouts in first half.) Here is the play as it developed. pic.twitter.com/QQOEpUtfWq

Here’s a Cowboys defender jumping offsides and handing the Lions a first down on 4th & 2.

These are the types of things that have held the Cowboys back in their losses. Simple and very easily avoidable mistakes.

You just cannot jump here. Especially when Detroit pulled this last week. It was obvious. pic.twitter.com/9rhBeJUaq8

Here’s a missed field goal from just 35 yards out.

Cowboys miss a field goal at the end of the half that would have hit the 1H over (22.5)
pic.twitter.com/rZcuncKVC6

The Eagles have been better coached than the Cowboys this season, but they’ve made their share of boneheaded errors as well. Their problem has been a lack of talent on both sides of the ball that has forced their star players to make risky decisions that have a tendency to backfire.

Here’s an ugly pick that happened when Wentz tried to force the ball to Dallas Goedert in a desperation situation.

He already turned the ball over twice in the first half and had another fumble called back to defensive holding.

Here's his INT against the #Seahawkspic.twitter.com/YOpYUrHoZE

Here’s a nasty fumble that happens after Wentz sees nothing in the pocket.

Wentz with this 13th fumble of the season that could not have come at a worst time#FlyEaglesFly#GoBirds#PHIvsWSH pic.twitter.com/6SKqYsdNe5

Let’s not let this 16th-ranked defense off the hook. Here’s three Eagles missing a tackle, turning a two-yard screen into a 20-yard first down.

Third down and four, #Eagles defense gives up a first down on a screen. pic.twitter.com/epQBdIteQb

Oh, and there’s special teams. Here the Eagles get taken in for a fake punt against the Falcons. Atlanta beat the Philly in this game, even though they wouldn’t win again for nine weeks.

Missed tackles have been a common enough occurrence for the Dallas defense as well. Here’s Saquon Barkley shredding the ‘Boys for 65 yards on a single run, in a season when almost every other team has been able to bottle him up.

Who deserves to win this game? It’s hard to say. Here’s the Cowboys messing up a coin toss.

Only the Dallas Cowboys and Dak Prescott can screw up a coin toss.
Dak: Defense, Defense
Dak: We want to kick it,
Dak: Kicking it that way.
Dak: We defer to the 2nd half.
🤔🤔🙄🙄🙄😜😜😜 #LARvsDAL #DALvsLAR #DallasCowboys #CowboysNation #Cowboys #ComeOnMan 😂😂😂 pic.twitter.com/nMzMfYJMgq

But then again, Carson Wentz makes throws like this.

Another bad pass by Carson Wentz, this was on 3rd down and led to a punt.#Eagles signed Wentz to a $128 million contract extension with $107 million guaranteed this off-season. That might have been a mistake.pic.twitter.com/l4s88M3hZ5

Maybe it ultimately doesn’t matter who wins. As it stands today, the winner of this game would have to play the San Francisco 49ers on Wild Card Weekend. Is the season really that much better for the 9-7 or 8-8 team that has the pleasure of being humiliated at home against the Niners? Does an evening of watching Nick Bosa do this to Carson Wentz or Dak Prescott make the season any sweeter?

Look at former Ohio State Buckeye Nick Bosa getting the sack on Baker Mayfield… then doing the mid-field plant flag that Baker pulled off at the Horseshoe a few years ago pic.twitter.com/w2jJifLrnZ

No matter how this game pans out, the Cowboys will have to reckon with Jason Garrett’s abominable playcalling. It feels like this should finally be the year for a coaching change in Dallas, even if we have to endure a week or two more of Jerry Jones hemming and hawing before we get it.

Philadephia is going to have to reckon with the fact that it has $100 million in guarantees tied up in Carson Wentz and hasn’t been able to set him up for success. A playoff berth might feel good, but that would put them a little deeper in the draft and a little less likely to find the receiver who might make this offense work.

But, hey, someone has to win the NFC East. And we’ll find out who it is on Sunday. And we’ll be one week closer to not having to watch these two teams play anymore this season.

Here’s everything you need to know to live stream Cowboys vs. Eagles, if that’s still something you want to do.

There are a number of options for watching Cowboys vs. Eagles on streaming platforms that carry Fox. However, consult a coverage map to see what game your regional channel will be playing.

Cowboys vs. Eagles live stream: How to watch NFL online