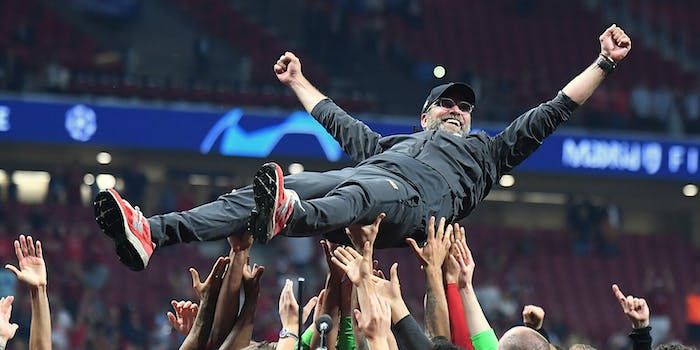 How to stream Liverpool vs. Red Bull Salzburg live in Champions League

Liverpool hasn't clinched its spot into the Champions League Round of 16 yet. It all hinges on what happens Tuesday.

Liverpool is in phenomenal shape in the Premier League, looking set to win the league and possibly do it without losing a single match. But it’s also in danger of not making it out of the group stage of the Champions League as defending title-holders. A surprising Red Bull Salzburg could knock the Reds out of the tournament Tuesday. With even just a draw, though, Liverpool makes it through. Read on to learn about the craziness ensuing if Liverpool loses.

Here’s everything you need to know to live stream Liverpool vs. Red Bull Salzburg, including what to watch for on the pitch.

Liverpool vs. Red Bull Salzburg: What to watch for

In Group E, Liverpool has accumulated 10 points, Napoli is on 9 points, and Salzburg is still in the mix for advancing with 7 points. This is the group that’s helped people educate themselves on the Champions League’s odd tiebreaking rules. The list includes, for teams tied on points in the standings:

If Salzburg beats Liverpool, that’s when things could get interesting. Salzburg lost to Liverpool 4-3 at Anfield, so a one-goal win for Salzburg would do the trick as long as its 1-0, 2-1, or 3-2, as that would tie them in the first three categories and allow them to win on head-to-head away goals. It’s not like Salzburg couldn’t do this; former New York Red Bulls coach Jesse Marsch has the team playing well, and Erling Braut Halang is one of Europe’s hottest goal-scoring prospects. He has 16 goals in 14 appearances so far in the Austrian Bundesliga this season, and he’s rumored to be going to Arsenal, Juventus, Dortmund, or RB Leipzig, depending on who you believe.

Of course, Liverpool still has arguably the best attacking front three in world club football and a pressing defense under the tutelage of coach Jurgen Klopp. And, of course, they are the defending champs. While it’s likely the Reds pull this one out, Red Bull Salzburg could make Reds fans nervous.