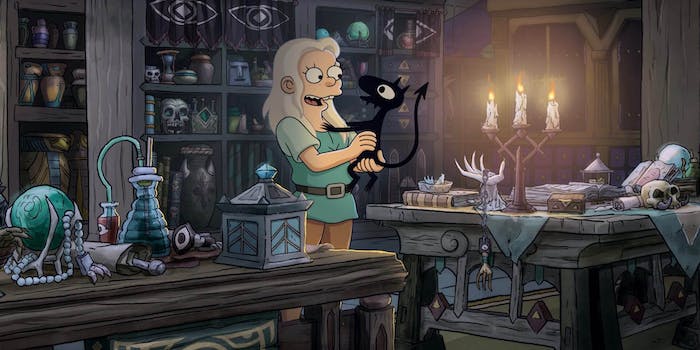 The show goes in a new and interesting direction before reverting back to its older self.

Disenchantment’s first season took the comedic cornerstones that Matt Groening built with The Simpsons and Futurama and placed them in an absurd, dysfunctional fairytale kingdom. Alongside its silliness, it mixed in a tale about a rebellious princess’ place in a world that saw her as little more than a joke. She chose to resurrect her mother over her friend—and it didn’t take long for all of Dreamland to suffer the consequences.

RELEASE DATE: 9/20/2019
CREATOR: Matt Groening
STREAMING: Netflix
With most of Dreamland turned to stone, Bean and Luci must find a way to save the kingdom and make things right.

The fallout is even more pronounced in Disenchantment season 2, lending more nuance to characters who got the short end of the stick in season 1. And although the serialized story takes some fascinating turns, it stumbles when it relies on familiar staples.

Dreamland is no longer the fantastical and eccentric kingdom it was set up to be. Much of it—from villagers and advisers to food and a flowing waterfall—is still turned to stone, a result of a potion unleashed by Dagmar. Unaware of who caused the stony destruction, Bean (Abbi Jacobson) is on a ship to Maru to meet her mother’s side of the family. It doesn’t take Bean long to figure out it wasn’t just motherly love that motivated Dagmar to take her to Maru.

Luci (Eric Andre) particularly shines in the midst of a massive existential crisis—at least as much as a demon can have one—while Bean wrestles with near-constant guilt from choosing to resurrect her mother over Elfo (Nat Faxon) and gaslighting from her family. But after a lifetime of having people try to shape her into something she’s not, she’s making moves of her own. Sure, some of them might be giant mistakes, but at least they’re her own to make. Unsurprisingly, many characters aren’t thrilled to see Bean act in a way that resembles anything other than a standard medieval woman.

King Zøg (John DiMaggio), on the other hand, has to figure out what to make of his life after learning that the wife he spent 15 years mourning and attempting to bring back actually wanted to kill him. Well past his prime, Zøg has to reconnect with parts of his old self, but he is just as susceptible to bouts of absurd jealousy and stupidity as anyone in Dreamland. Even Bean’s stepmother, Oona, and half-brother, Derek, get time to shine, as season 2 fills in their backstories and elevates them above a punchline.

But Disenchantment season 2 only follows those threads to a point. Around the season’s halfway point, it almost completely drops the serialized story, instead opting for more standard screwball comedy plots filled with drunkenness, backstabbing, and situational humor. As characters revert to their old habits, season 2 starts to feel repetitive.

This season also pulls back on its referential humor, now confident enough to rely on its own developed world for biting commentary. When it does go for reference, it stands out even more—and not always in a good way. An early episode includes such a blatant nod to another series that it’ll make you laugh (in spite of yourself) and groan at exactly the same time, while another works as a so-so parody of a very famous episode of television.

Disenchantment offers a few answers upfront, but it mostly leaves lingering questions, as it ends in a similar place to where it started. Season 2 is a vast improvement over season 1, providing sharp meta-commentary and fits of humor. It’s still trying to figure out what kind of show it wants to be, and while one of its stories instantly hooks you, the other makes it easy to lose sight of the larger story it wanted to tell in the first place.