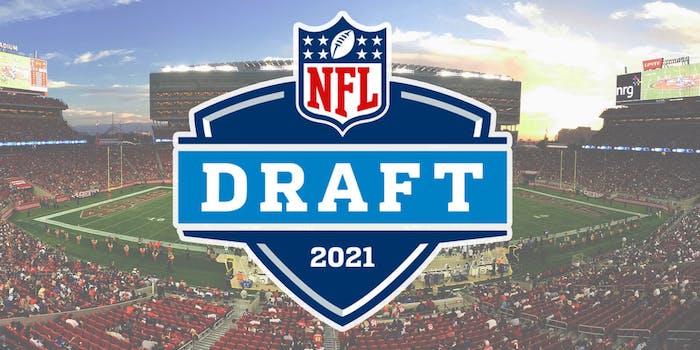 How to stream the 2021 NFL Draft for free

The 3-day sports bonanza is on.

It feels like the NFL season just ended. But now it’s time for the unofficial start of the 2021 NFL season: The NFL Draft.

While it’s quite likely that Clemson Trevor Lawrence will be the first selection in the 2021 NFL Draft, some of the early intrigue will be around where the other quarterback prospects go, including Ohio State’s Justin Fields, BYU’s Zach Wilson, and Alabama’s Mac Jones. The latest NFL.com mock draft has all four quarterbacks going within the first seven picks. (They concocted a trade between the Lions and Broncos to make that happen, though.)

Yet the most explosive player in the draft might be the 2020 Heisman Trophy winner, DeVonta Smith, who put up serious numbers at Bama en route to becoming the first receiver in 30 years to be honored as the nation’s top college player.

The 2021 NFL Draft will also be accompanied by the NFL Draft-A-Thon, a two-day livestream and virtual fundraiser which the league says will “focus on real issues facing our hardest-hit communities today.” It’ll take place Thursday, April 29 and Friday, April 30, involving players, teams, and fans from around the nation.

Here’s everything you need to know to stream the 2021 NFL Draft.

How to stream NFL Draft

NFL Network, ESPN, ESPN Deportes, and ABC are available through a mix of the major live TV streaming services. When trying to decide which one is best for you, you’ll want to weigh the cost, the other channels you’ll receive, and the compatible devices for streaming.

Hulu Live TV sets you up with local channels and has a broad spectrum of entertainment and sports channels to review, including the full suite of ESPN channels, Cartoon Network, FX, HGTV, and even deep cuts like National Geographic and Syfy. ABC and ESPN are available on Hulu with Live TV so you can stream the 2021 NFL Draft.

If you’re looking for a streamlined, cost-effective streaming package, check out Sling TV. It offers two basic cable packages, Sling Orange and Sling Blue, each of which costs $30 per month. There’s also the third option of getting Sling Orange + Blue for just $45 per month. Sling also has a number of add-ons, including robust international packages organized by languages all over the globe.

You’ll get more Sling TV channels by choosing Sling Blue, with its 40 channels including sports favorites like FS1 and NBCSN and cable mainstays like Food Network and Discovery Channel. But Sling Orange brings must-haves Disney Channel and ESPN as part of its package. Sling Orange + Blue will also get you ESPN, and it’s there if you can’t choose between the two skinnier packages.

Vidgo offers a package for under $40 a month that pulls together more than 60 English-language channels into its National English Package. The baseline package of Vidgo channels include ABC, Fox, and the ESPN family of channels (including ESPN Deportes). Vidgo is also one of the few streaming services that carries BeIN Sports. But it’s like Fubo in that, even though it started out for streaming sports, it carries a lot more now. With Vidgo, you can watch a game on ESPN and chat about it online via Vidgo’s Social TV platform.

If you’re already looking to AT&T for your wireless needs, you might consider AT&T TV Now to cover streaming for you. AT&T TV Now channels start with Plus and Max, which even include HBO. Then, AT&T plans expand from there, approaching cable selection and pricing with AT&T TV Now’s biggest packages. AT&T streaming also comes with Cloud DVR, letting you record up to 20 hours of TV per month. If you’re looking for ESPN, don’t fear: It’s available at even the most basic levels.

The YouTube TV channel list includes local channels and sports options. This includes ESPN, ESPN2, FS1, FS2, and NBA TV, and plenty to keep kids occupied. This includes Disney Channel and its companion channels, Nickelodeon, and Cartoon Network—all in one easy-to-access package. It even comes with a few Spanish-language channels like Telemundo and NBC Universo. YouTube add-ons include HBO Max, Showtime, and Starz. YouTube TV packages have some advantages over their competitors, including a generous DVR and multiple screens package. From one account, each user can create an individual profile to track favorite shows. Plus, it’s a great place to stream NFL Draft.