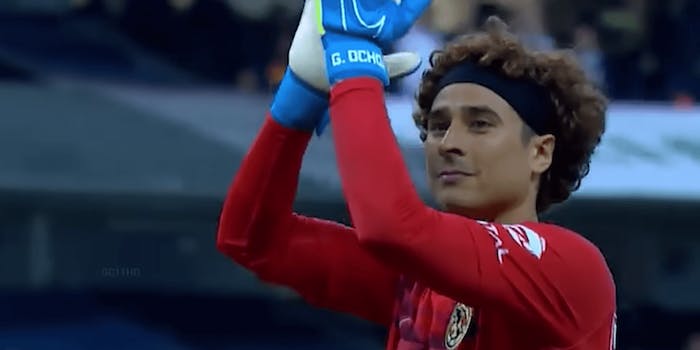 How to stream America vs. Monterrey live

Two big names face off in Liga MX play, though only one's faring well in the Clausura.

Here’s everything you need to know to stream América vs. Monterrey live on Saturday.

The rematch of last season’s Liguilla final takes place in Nuevo León this weekend, when Club América travels to take on Apertura champion and current last-place club Monterrey. The Rayados have completely fallen off in 2020, after a third-place finish at the FIFA Club World Cup and besting América for their seventh major trophy of the previous decade. The defending Champions League winners have zero wins and three points through six games, whereas América has continued its good form and is second in the Clausura with 13 points and just four goals conceded.

The match is on Fox Sports 2; these streaming services provide fans the opportunity to catch Liga MX action throughout the season.

FuboTV is a solid TV streaming service option, whether your tastes run to entertainment (AMC, Syfy, FX), news (MSNBC, CNN), or sports (NBA TV, NFL Network). If you’re a soccer fan, however, it will appear tailor-made for you, with NBC and NBCSN for Premier League matches, 10 beIN SPORTS channels for La Liga and Ligue 1FS1, FS2, UniMás, and Champions League action via TNT all on tap. If you can’t watch a match live, FuboTV offers a three-day replay for each match and 30 hours of cloud DVR. (Check out the complete FuboTV channels list.) FuboTV also has bilingual families in mind; each subscription comes with UniMás, Galavisión, NBC Universo, beIN SPORTS, Univision, and Fox Deportes. An extra $7.99 per month will bring you Latino Plus, which includes CNN en Español and TyC Sports among its offerings.

Monterrey (last five league games: DLDLL) won the 2019 Apertura by sneaking into the Liguilla as an eighth seed, but that strategy may not be fruitful in 2020 as Rayados are already five points back after week six. Liga MX (and the world) has seen how good this team is when they turn it on, but the loss of El Tri attacking midfielder Rodolfo Pizarro to Inter Miami has significantly lowered Monterrey’s ceiling.

The club has invested Pizarro’s $12 million dollar fee into two winter signings, most notably 21-year-old Ivorian striker Aké Loba, who scored 11 goals for Querétaro on loan in 2019. Loba played six minutes in week one and hasn’t appeared since, which is just one of the reasons for Monterrey’s scoring woes.

América (last five league games: WWWLD) is fully a part of the leading pack in Liga MX this season, but fans may be worried by the club’s Concacaf Champions League performance in the round of 16. América needed a 90th-minute Córdova goal to salvage a 1-1 draw with Comunicaciones in midweek, but that is at least in part due to the difficulty of playing on the road in Concacaf and their Guatemalan opponents committing 23 fouls. Las Águilas will surely take care of business in the second leg, but before that they must go into Monterrey to take on a very talented squad that would kill to get its first win of this season.

CF Monterrey is a healthy favorite this weekend at +100, with a tie at +240 and a win for América at +270, courtesy of DraftKings Sportsbook.