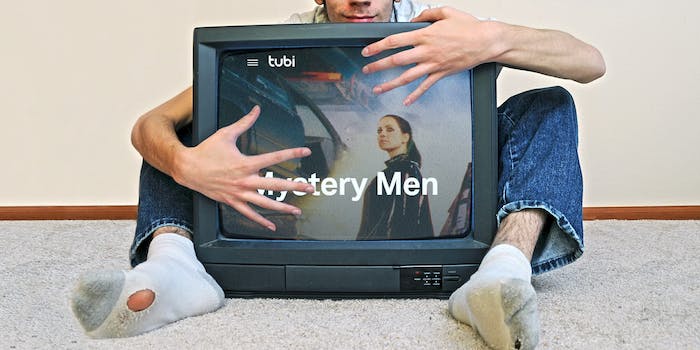 How to cut the cord when you’re broke

Here are your best options for streaming devices, live TV, and more.

Just because you’re broke that doesn’t mean you shouldn’t get to be part of the streaming revolution. In fact, that’s one of the best reasons to join in. If you’re still paying for cable, you can immediately start saving money. Whether you’re living on a budget, trying to save money, or just had a change of circumstances, there’s room for you too. Here’s everything you need to know about cord-cutting when you’re broke.

The cheapest streaming player on the market: Roku

There are plenty of affordable options when it comes to streaming media players, but there’s one reason Roku reigns over all of them: free channels. From free streaming TV to thousands of free movies, Roku is the easiest way to get entertained on the cheap.

For the average consumer, the Roku Express is all you’re ever going to need in a streaming player until they start giving away 4K TVs. It’s fast, supports everything from live streaming TV to games, comes with a remote, and can be controlled using Roku’s incredible smartphone app. The smartphone app unlocks features usually only available on more expensive models like private listening, which lets you plug headphones into your phone to listen to your programs so you won’t disturb other people. For just $29.99, you can unlock hundreds of free streaming channels within the Roku platform. Even better, if you wait until it goes on sale, you can get it for a few bucks cheaper. If you’re using an older TV with AV cables, the $35 Roku Express+ has the hookups you need with the same great features. Likewise, if you’ve already invested in a 4K TV, you’ll want the Roku Premiere, which retails for $39.99 but can regularly be found on sale for around $32 to $35 on Amazon.

Thanks to the advent of streaming TV, cable has never been more affordable, even if you’re broke. Sling TV makes it super cheap to get your favorite cable channels, with its $30-per-month packages. Even better, for the first three months, your subscription is just $15 per month if you’re new to the service. If you’re on a budget, the best package is the 49-channel Sling Blue package. You’ll be missing out on ESPN, but get favorites like including CNN, Cartoon Network, FS1, FX, and NFL Network. (Here’s a complete guide to Sling TV channels and our Sling TV review.)

There’s no better deal for a broke streaming TV fan than Philo. For just $20 per month, you get live streaming TV, on-demand, and unlimited DVR recording time. Its 45-channel package is almost exclusively focused on entertainment, with only two news channels Cheddar News and BBC World News. For your sacrifice, you get AMC, Comedy Central, Discovery, Food Network, Lifetime, MTV, and more. You can stream on up to three devices at one time, and your Cloud DVR saves last for 30 days. From a pure entertainment standpoint, Philo TV can’t be beaten.

Every other service we’ll be recommending is free or has a free option, but if you’re streaming when your broke, Hulu is an easy choice. The company just lowered its price to $5.99 per month, a truly staggering deal for the amount of content you get. It’s like having cable if you just had to wait an extra day to watch it. Everything from USA to Cartoon Network and Comedy Central shows awaits, with moderate commercial breaks every so often. Hulu also just capped its ad breaks to 90 seconds. Add to that a host of original series and movies, including recent blockbusters, and Hulu is the best subscription deal in streaming. (You can also subscribe to Hulu with Live TV for $44.99 per month and receive free access to Hulu’s on-demand catalog.)

Vudu is an odd service. Owned by Walmart, the streaming company got its start doing digital video rentals before adding a free ad-supported option in 2016. Purely from a rental point of view, you should use Vudu thanks to its massive library of $0.99 rentals and new hits. But it’s free component has also become something to celebrate. Offering free TV and movies with limited ad breaks, Vudu offers plenty to watch if you don’t mind doing a little digging.

Looking for anime? Crunchyroll is your plug. While the service also offers an affordable pay service, you can watch most of its content in standard definition with its ad-supported app. One Piece, Sword Art Online, Mob Psycho 100: There’s an almost unlimited amount of anime to watch on Crunchyroll from classics to new favorites. Best of all, it has a Roku app.

Up until recently, Crackle was owned by Sony, but a new deal has seen the company gain a secondary owner in Chicken Soup for the Soup. No, we’re not kidding. While we don’t know what that means for the future, at present Crackle is still a great app. Its original series like Get Shorty and Snatch are as good as anything Netflix is putting out, its the only place outside Hulu you can stream Seinfeld, and the movie selection feels like a ’90s video Blockbuster store. We wish it has shorter ad-breaks, but Crackle is still a killer in the world of free streaming.

It’s easy to look down on YouTube without thinking about it, but you’d be wrong. YouTube is one of the most popular streaming platforms on Earth and acts as a cable box for many viewers. It’s a place to find news, entertainment, education, and everything in-between for free. From movies to funny home videos, YouTube offers more variety of entertainment than any other service.

Just because you’re on a budget doesn’t mean your children should get to enjoy PBS. If your TV can’t pick the PBS station over the air, you still have options. The PBS Kids app offers a free 24/7 place for kids content, without asking for money or a login. New content is uploaded every Friday, with a mix of on-demand and live programming. Parents also get a handy explainer for each program, letting you know the target age group and educational topics of the show.

With NewsON, Roku users can watch local broadcasts from around the country for free. Find out about your local bank robberies or check on the weather where your parents live—we’re not here to tell you how to live. Honestly, we watch it as much for the local special-interest pieces as much as the news. Give NewsON a try.

Vidmark is a truly special niche service for old-school genre fans. During the ’80s, Vidmark Entertainment was a TV and movie production company, usually specializing in B-horror, sci-fi, and suspense. Today, it’s a Roku channel featuring the best deep-cut video store movies and series pop culture has forgotten. If you miss the days when Syfy played old classics, Vidmark will be a walk down memory lane.

Missing streaming TV and don’t want to pay? Pluto TV is a free online streaming TV service that will make you forget your cable company. You won’t get ESPN or MTV, but you’ll find over a hundred channels of movies, TV shows, sports, music, comedy, and beyond. I pay for DirecTV Now and still end up watching Pluto TV regularly. Make sure you give it a shot.

Tubi TV is one of the finest sources for mainstream TV and movies on Roku. This free, ad-supported, streaming service offers thousands of hours of content from Lionsgate, MGM, Paramount, Starz, and beyond. In the last year, Tubi TV has streamed everything from Mission Impossible to Hostel, with surprise treasures like Hustle & Flow and True Grit currently playing. There’s plenty of odd direct-to-video crap from the major studios, but when you find gold, it shines brightly.

New to cord-cutting? Here are our picks for the best movie streaming sites of 2019 and free live TV apps and channels. If you’re looking for premium services, here’s how to watch HBO, Showtime, and Starz online.