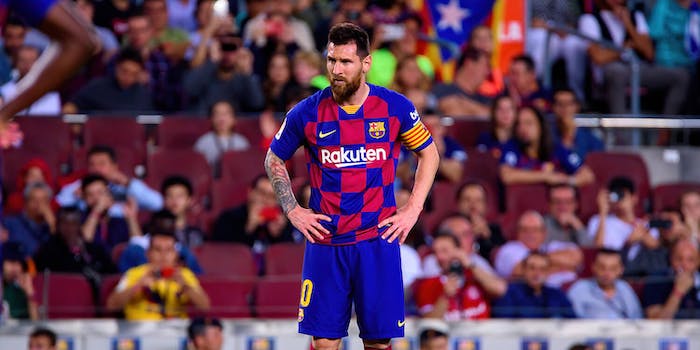 How to stream Barcelona vs. Slavia Praha live in the Champions League

Barcelona, reeling from a rough home loss over the week, hosts Slavia Praha with a chance to open up a big lead in its Champions League group.

Didn’t we just do this? Barcelona and Slavia Praha met less than two weeks ago when Champions League play last happened. The group stage schedule works out to where this is almost a return leg for the teams, who fought to a 2-1 victory for Barca when they faced off in Prague Oct. 23. It comes at a weird time for Barca—which just lost 3-1 to Levante over the weekend to create a logjam of a La Liga race. While it’s not a runaway race in this Champions League group either, this match provides Barca an opportunity to put distance between itself and the rest of the group.

Here’s everything you need to know to live stream Barcelona vs Slavia Praha, including what to watch for on the pitch.

The match is on B/R Live, TNT, TUDN, and UniMas; the following services provide a one-week trial and therefore an easy way to watch Champions League matches.

Barcelona vs Slavia Praha: What to watch for

Barcelona gave up three goals in the span of eight minutes to suffer a rare La Liga loss over the weekend. Things were happier in its last Champions League go-around on Oct. 23, against the same Slavia Praha team it’ll face Tuesday. There, a third-minute goal by Lionel Messi and a second-half own goal was enough to get Barca out of Prague with the win. With Dortmund and Inter facing each other in a big showdown later Tuesday, the best possible scenario would be to get the win and then see the German and Italian clubs take points off each other.

For Slavia Praha, its cruise through the Czech First League continues. Tomas Soucek opened things up with a brace on Saturday at Slavia Praha dispatched 10-man Banik, 4-0, to open up a 12-point lead in the standings. Of course, Barca and Banik don’t have much in common besides the first two letters of their names. A loss for Slavia on Tuesday would all but take them out of the tournament, and even a draw won’t help them much. They need to find three points in the place where it might be toughest for them to do so this group stage.