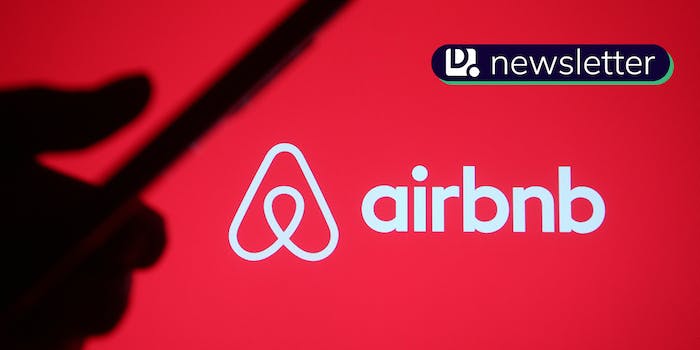 Newsletter: Did you see this viral Airbnb horror story?

Hello fellow citizens of the internet! Welcome to today’s edition of Internet Insider.

We’ve got news from all over the web for you today including some good old fashioned dunking on Sony about its superhero plans, a truly chilling Airbnb horror story, and yet another “charged lemonade” viral video.

Plus, our Senior Culture Reporter Michelle writes about Lightyear in our weekly “Now Streaming” column.

That’s a lot to get through, so let’s get right to it.

FANDOM: People online are dunking on Sony’s plan to have Aaron Taylor-Johnson star in an upcoming Kraven the Hunter movie after the actor characterized the character as an “animal lover” in a recent interview. Our full report unpacks the discourse, including people dunking on the idea of “Kraven the PETA member” and predicting the film will flop like Morbius did.

HORROR STORY: A professor is going viral for detailing how an Airbnb host threatened her over a four-star review. After writing the review, the professor got a text message that read: “I have your picture, your name and your number. You have 48 hours to remove your review or I’m hiring a private investigator to obtain your address and then the fun begins.” You can read more about the harrowing experience here.

REVIEW: Looking for something to stream in the middle of the week? Well, we’ve got a review of Spiderhead, which stars Chris Hemsworth, that recently came out. Our Culture Reporter Gavia says the sci-fi/psychological thriller is “clumsy, but entertaining.” You can read the full review here.

CHARGED LEMONADE: Panera Bread’s “charged lemonade” continues to be a viral hit on TikTok. The hyper-caffeinated drink has sparked numerous viral videos about it, with the latest being a TikToker wondering whether people think she is “a thief” or a member of the Panera Bread Sip Club while filling her cup with the “charged lemonade.” The video has already amassed more than 170,000 views.

It’s probably not the greatest sign for a movie when the most memorable aspect of it prior to its release is an 18-month-old tweet from Chris Evans attempting to explain the film’s premise.

First announced during a gargantuan December 2020 Disney investors call, Lightyear, on the surface, seemed like the kind of movie that a studio that already had a reputation for mining its IP for parts might make. It was a way to spin off recognizable characters from Toy Story while being separate from Toy Story, and the fact that Evans, who was now voicing Buzz Lightyear instead of Tim Allen—who voiced the toy for all four Toy Story movies—found a way to make the film seem even more convoluted (and it already sounded pretty convoluted), helped to cement that initial reaction.

In reality, the premise of Lightyear is summed up in three sentences that appear before the start of Lightyear, which is a lot easier to parse than how Evans tried to explain it: “In 1995, a boy named Andy got a Buzz Lightyear toy for his birthday. It was from his favorite movie. This is that movie.”

Apart from that, it has nothing to do with Andy or Toy Story, although Pixar created a poster showing Andy and a bunch of his toys watching the film in theaters (which mostly had people calling Andy a jerk for taking up three seats for him and his toys at a full screening). I saw Lightyear on Monday night with a decent crowd, and although it didn’t elicit the kind of intense emotions Pixar movies are known for, I had a lot of fun. The visuals, as always, were top-notch.

By Monday, news of Lightyear’s disappointing box office numbers had already spread. Lightyear was the first Pixar movie to open in theaters since Onward in March 2020, and since then, three Pixar movies (Soul, Luca, and Turning Red) went straight to Disney+, so there was a lot of pressure on Lightyear to do well. As for why solid box office numbers that, due to framing and expectation, are seen as a disappointment, every potential factor surrounding the movie came up.

Disney’s decision to release several Pixar movies almost exclusively on Disney+ perhaps, unintentionally, framed Pixar movies as just streaming movies or movies not worth going to the movie theater for (a sentiment that Pixar employees felt Disney conveyed to them with the streaming pivots). And none of that touches the fact that we’re still in the middle of a pandemic and some parents might not want to take their children to the theater right now.

Having seen all of the Pixar movies that went straight to Disney+, I wish I could’ve seen them on the big screen; not only were they dazzling visual spectacles, but two of them featured non-white protagonists while the third was rich with queer subtext (even if it wasn’t intended to be).

Whereas Lightyear was much more derivative. Parts of it felt like a Star Wars knockoff even if it retconned its Empire Strikes Back reveal, and its attempt to recreate the heartbreaking and bittersweet tragedy that is the first 10 minutes of Up fell flat. If anything, Lightyear seemed like the better fit for Disney+.

I’m not sure how much of it was a natural curiosity or my brain’s attempt to pick the film apart at the seams, but the meta-narrative around Lightyear kept swirling through my brain as I watched it. Was Lightyear live-action or animated in Andy’s world? (Live-action, according to director Angus MacLane.) What kind of technology would filmmakers have used? Was Lightyear an in-universe success at the box office? Is this really a movie that a 6-year-old Andy would’ve seen and loved?

And why the hell didn’t Andy have a toy of Sox (Peter Sohn), Buzz’s emotional support robot cat that was engineered in a lab to sell toys, instead of or alongside Buzz? (That answer, like many spinoff quandaries, is because Sox didn’t exist when Toy Story was made. But the 2022 Sox was almost definitely designed in a lab to sell toys.) If Andy didn’t, then his younger sister Molly—likely forced to watch Lightyear ad nauseam until she could recite it along with him like any younger sibling—probably would’ve.

Unlock the wellness powers of nature

While health trends come and go, people have been turning to mushrooms for their medicinal benefits for centuries. WonderDay Mushroom Gummies are the modern way to harness the wellness powers of adaptogenic mushrooms. Packed with fruity flavor, each yummy gummy contains a proprietary formula of 10 functional mushrooms that are powerful enough to balance your mood, energy, gut microbiota, and stress for all-day relief for your mind and body. Save 15% with code DAILYDOT15.

📦 Footage of a smart doorbell camera showing an Amazon driver cursing while making a delivery is resonating with people online who “feel this every day of my life working.”

🍴 A TikToker captured an employee kicking her out of a restaurant after she paid for her meal because she was “very underdressed.” Her outfit? A black shirt, a plaid skirt, and tights.

🌴 In a viral TikTok video, a man argues that vacation time should not come with the expectation to reply to work emails, and a lot of people agreed with him.

✨ It’s easier than ever to gift the magic of Disney. Here’s everything you need to know about the all-new Disney+ gift subscriptions.*

🦷 A TikToker shared a warning this week that has attracted a ton of attention: don’t get veneers abroad without conducting research.

🎬 Our culture team reviewed The Old Man, a five-part thriller starring Jeff Bridges and John Lithgow that is streaming on FX/Hulu. You can read the full review here.

💸 A towing company in New York City illegally tried to make a woman pay double the standard fee, a TikToker claimed in a viral video.

🥝 YouTube demonetized the Act Man for a satirical doxing tweet, sparking debate over its enforcement of community guidelines. Sign up for Passionfruit, the Daily Dot’s weekly creator economy newsletter, for more coverage.

A TikToker is alleging that Master Locks are not the master protectors they claim to be. After seeing a TikTok about scams that have been normalized, a lock picker was inspired to break out a Master Lock to reveal just how easily they can be picked.