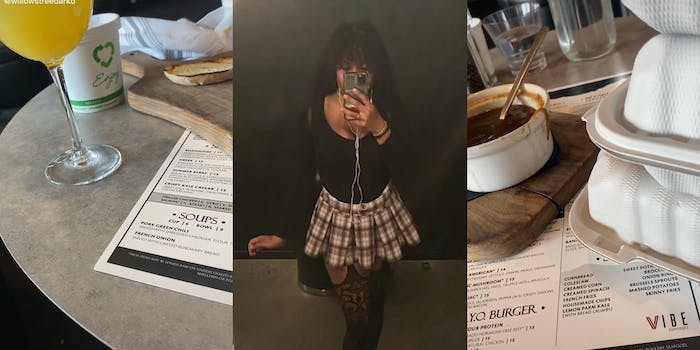 ‘Sometimes we do have to wear a little bit more clothes’: Woman films worker kicking her out of restaurant for being ‘underdressed’

A TikToker captured an employee booting her from a restaurant after she paid for her meal because of the way she was dressed.

User @willowstreedarko posted a TikTok on Sunday showing an employee of Great Divide Brewery and Roadhouse in Castle Rock, Colorado, asking her to leave the restaurant and offering her a mimosa to-go. He tells her that multiple guests complained about how the TikToker was dressed.

“You keep getting up and going to the bathroom,” he tells her. “You’re very underdressed.”

The TikToker tells the employee that what he’s doing is wrong and racist. He says she got up and walked around the restaurant and that he wasn’t sure what she was doing; @willowstreedarko says she was going to the bathroom.

“I like your business but sometimes we do have to wear a little bit more clothes,” the employee tells the TikToker before advising she wear something that “covers up [her] ass.”

In an earlier TikTok, @willowstreedarko posted a video of herself at Great Divide and said that “multiple white woman” complained about what she was wearing. She shows her outfit: a black shirt, a plaid skirt, and tights.

Commenters on @willowstreedarko original video sided with the TikToker and said the restaurant employee’s actions were inappropriate.

“They weren’t worried abt how you were dressed when they sat you at the table and let you order and let you eat and drink,” @poshedandpopped commented.

“Blatant discrimination,” @camofojo wrote. “I’m so sorry this happened to you.”

“Sounds like discrimination to me,” @chenetlarose commented. “[White women] will never change.”

Others said they left Great Divide “one star reviews” on @willowstreedarko’s behalf. The TikToker also said that her sister called the restaurant and asked if there was a dress code, and a worker said there was not.

The Daily Dot reached out to @willowstreedarko via TikTok comment and contacted Great Divide over the phone and via contact form.