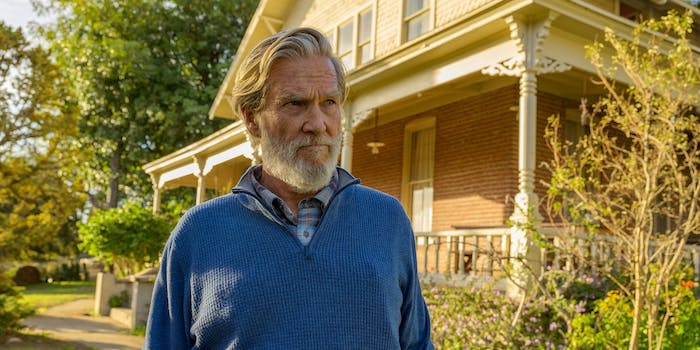 ‘The Old Man’ review: Jeff Bridges grapples with the past in this familiar-but-effective CIA thriller

From the creators of 'Black Sails,' this espionage miniseries pits Jeff Bridges against John Lithgow in a game of cat and mouse.

Adapted from a novel by Thomas Perry, FX’s The Old Man runs along familiar lines for a particular type of spy thriller. An elderly badass gets dragged out of retirement. A cat-and-mouse game ensues, reviving old grudges and conspiracies. With no moral qualms about killing to survive, these men struggle to integrate their violent pasts with their desire for peace and domesticity—embodied, of course, by the women in their lives.

Release Date: June 16, 2022
Creators: Jonathan E. Steinberg and Robert Levine
Streaming: FX/Hulu
Jeff Bridges and John Lithgow star in this five-part thriller about a retired CIA operative (Bridges) who must go on the run. With tough, down-to-earth action scenes and compelling performances from the two leads, it’s a satisfying addition to the espionage genre – but not a particularly deep or original one.

Jeff Bridges takes the lead role as retired CIA operative Dan Chase, forced to go on the run after his civilian cover identity gets blown. In general terms, this premise joins a crowded field of thrillers starring actors like Liam Neeson, often hinging on the fantasy of boomer-aged men as superhuman killing machines. This one is a more measured take, leaning more toward John Le Carré than John Wick.

As Chase escapes and/or kills a series of assassins and government agents, we learn more about his antagonist Harold Harper (John Lithgow), a counterintelligence agent leading a team (including Alia Shawkat) to track him down. Chase and Harper used to be allies, embroiled in messy anti-Soviet efforts in Afghanistan. Then Harper climbed the ranks while Chase vanished into civilian life, marrying and raising a child. Genre rules dictate that dark deeds don’t stay buried forever, but for more than thirty years, both men achieved their own type of happily-ever-after.

With this kind of story, it helps to quickly ascertain which view of the CIA we’re dealing with. Is it the idealized Hollywood version, home to lethal superspy heroes? Or something more realistic, reflecting the CIA’s legacy of disastrous incompetence and toxic American imperialism? The Old Man skews more toward the latter, while still positioning itself as a conventional thriller.

Even before we see any flashbacks to Chase’s past (starring an extremely convincing Bill Heck), we know he did terrible things during his CIA days. Likewise, there’s no moral superiority among the agents hunting him down. The thing is, though… Dan Chase is Jeff Bridges. And we all love Jeff Bridges! The show is fully conscious of his inherent likeability, as Chase lulls people into a false sense of security with his benign civilian persona.

For instance, whenever someone objects to his ever-present dogs (a pair of deadly, military-trained rottweilers), he projects an amiable aura around a steely, immovable core. Somehow, without sparking a direct confrontation, these people allow the dogs to stay. One such character is played by Amy Brenneman, a plausibly normal middle-aged woman who becomes embroiled in Chase’s life. With her and others, his friendliness isn’t entirely feigned. During phone calls with his daughter, he comes across as a genuine family man. As long as you discount all the murders and extralegal operations overseas, he’s a nice guy. Which is kind of the point.

On the surface, The Old Man is a gripping yet formulaic tale. But for a niche audience, this show holds outsized significance, as a new project from Black Sails creators Jonathan E. Steinberg and Robert Levine. Underappreciated at the time, Black Sails now has a passionate cult following, celebrating its sophisticated writing and anti-establishment themes. Naturally, this leaves one curious about what the showrunners will do next.

The Old Man is a new direction for Steinberg and Levine, shifting from a sprawling historical drama to a taut contemporary miniseries. There’s some thematic overlap in the way characters interpret the narrative of their lives, particularly in the morally-neutral view of Dan Chase’s dual identities. Otherwise, though, there’s not much comparison.

For the most part, this is a star vehicle for Jeff Bridges, offering a well-characterized take on a classic formula. The show’s depiction of the CIA is cynical enough to feel mature, without digging very deep into the political context. And while Bridges and Lithgow are obviously superb, the writing isn’t smart enough for the more cerebral espionage stuff to really shine. An engaging example of the genre, but not a notable standout.