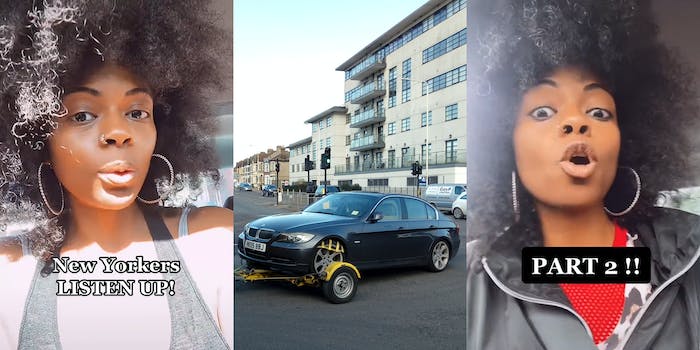 'Honestly, so smart to do research I would’ve paid the 250.'

A TikToker went viral this week after claiming a towing company in New York City illegally tried to make her pay double the standard towing fee.

The video, posted by user Princess (@princessisbey) recounts her version of events before explaining what she is doing to resolve the situation. Her first video has over 161,000 views and inspired a follow-up.

At the beginning of the video, she admits that she may have partially parked in front of a driveway and accepts that it is possible her car was rightfully towed.

Where her issues arise are the fees for doing so.

“They’re telling me I need to pay $250, cash only,” she recounts. “So, I call the cops because this guy is acting crazy. He’s trying to make me sign a form that says that I authorized the tow of the vehicle, which I did not. And he’s just being belligerent.”

While she’s waiting for the police to arrive, she gets suspicious. Following that suspicion, she does some research online and discovers that the towing company may be in violation of New York City law.

“There is a provision in the law in New York City that says that they cannot charge you more than $125 for a tow and up to three days of storage, and they must accept at least two major credit cards,” she claims.

According to the NYC Department of Consumer and Worker Protection, this is true. Their website reads, “if your car is towed for blocking a driveway, the maximum fee is $125 plus tax and $15 per day storage fee after three days.” They also back up Princess’ credit card claim: “Don’t accept ‘cash only.’ By law, towing companies must accept at least two major credit cards for payment for towing services.”

In her video, Princess suspects that the towing firm wanted her to pay cash because “they don’t want a paper trail.”

Princess says in a follow-up video that she verified this information with 311, the number for non-emergency information about city services.

She also claims she learned that the person asking for the tow must sign a contract before the towing occurs.

This information is slightly more difficult to verify, but it appears true with available information. New York City Administrative Code § 19-169 reads in part that authorization to tow “…shall include the location of the vehicle to be removed, the make, model, color and license plate number of such vehicle and a statement that such vehicle was removed pursuant to a notice of parking violation and shall be signed by the owner of such property, or his or her lessee, prior to removal.”

In this case, she claims no such signing took place.

Her video ends with her confronting a police officer about this discrepancy. While clarifying that it is not the fault of the person working there, she says she still needs the complete information about her tow as she plans to fight the towing fee.

Commenters on TikTok supported Princess in her quest.

“Honestly so smart to do research I would’ve paid the 250,” one commenter shared. “Now i’m mad LMAO.”

“That’s right girl! Do yo homework! So many people just pay just to get it over with!” another agreed.

We’ve reached out to Princess via Instagram DM and the NYPD via email.