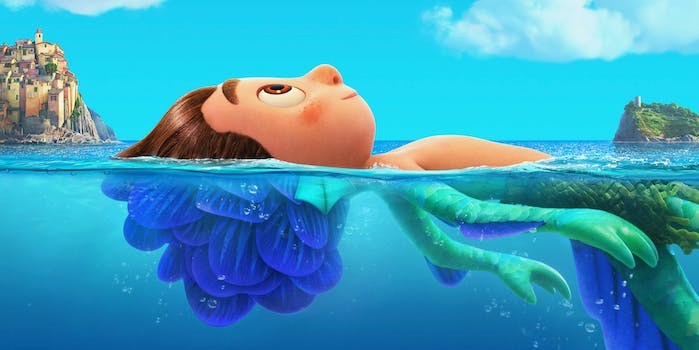 A teenage sea monster discovers what's above the surface in this coming-of-age story.

There’s a light breeziness to Luca that isn’t as present in many of Pixar’s recent offerings. That’s not necessarily a knock on those other films, which tackle everything from death and the after-life (Coco); death, the before-life, and a mid-life crisis (Soul); the all-consuming grief that comes with the death of a parent (Onward); and an existential crisis within a child’s mind (Inside Out). Over the past couple of decades, we’ve seen Pixar time and again practically perfect the art of cracking open our hearts and slowly putting them back together; whenever a new Pixar movie comes around, we now tend to expect it.

Release Date: June 18, 2021
Director: Enrico Casarosa
Streaming: Disney+
Pixar’s light and joyful coming-of-age story follows a 13-year-old sea monster as he ventures above the surface for the first time, meets a fellow teen sea monster, and visits a sea town on the Italian Riviera with dreams of speeding away on a Vespa during one life-altering summer.

Luca shows that you don’t always need that for a Pixar film to work, although Luca does have its fair share of existential crisis contained within. Set over the course of a fateful summer on the Italian Riviera, it’s closer to whimsical comfort food. With nods and homages to Hayao Miyazaki, it taps into the eternal nostalgia of summer’s past, the kinds of emotions that nothing short of a hearty meal can evoke, and a celebration of friendships in a simple but sweet coming-of-age story.

In spite of Luca’s premise—a world in which sea monsters live in the water and can transform into humans once they’re completely dry above the surface—it starts out simply. Luca Paguro (Jacob Tremblay) is a shy and naïve teenage sea monster who herds goatfish on his family farm by day but dreams of more at night; encounters with inane human items like a clock and a wrench stroke his curiosity. His parents (Maya Rudolph and Jim Gaffigan) are overprotective, warning him to never go to the surface because the “land monsters” want to hurt him. His more ballbusting grandmother (Sandy Martin) sees Luca venturing off more as an inevitability.

That inevitably comes to pass, thrusting Alberto (Jack Dylan Grazer) right into Luca’s path both under the sea and above the surface. Alberto is a force of nature, a fellow teen sea monster who has much more experience—and what he doesn’t know he covers up with sheer confidence; gravity, for him, is a tester. Alberto teaches Luca to walk, to ride a make-shift Vespa, and he delightfully tells Luca about how the stars are anchovies and the moon is actually a giant fish; Luca brings Luca’s fantasies to life in dream-like sequences, one of which will invoke director Enrico Casarosa’s previous Pixar short film La Luna. Alberto constantly tells Luca to quiet Bruno, aka that the voice in his head telling him not to do the dumb or dangerous, by shouting a simple “Silencio, Bruno!” toward it.

With threats from Luca’s parents to send him away to the deepest depths of the sea for his own protection, Luca and Alberto set their sights on the nearby (and human-populated) sea town of Portorosso, which brings the Studio Ghibli film, Porco Rosso, to mind. While the sea has plenty of dazzling visuals, largely in the meticulous nature of how Luca and Alberto transform into humans and back into sea monsters, it really comes to life once we get to Portorosso, a small town that’s so detailed, from the cobbled streets to the many shops near the water, that it feels almost real. But, unfortunately for Luca and Alberto, two fish literally out of water, Portorosso is a town full of people obsessed with the idea of hunting and killing sea monsters that may or may not exist; once you know where to look, that imagery is everywhere.

Even though the possibility of death looms over every interaction and splash of water, forcing Luca and Alberto to hide in plain sight, Luca isn’t the kind of film where it becomes overwhelming. Instead, the stakes are much smaller in scale.

With their eyes set on an old Vespa they can use to travel the world, they encounter Giulia Marcovaldo (Emma Berman), a stubborn girl determined to win the Portorosso Cup—a triathlon where contestants have to swim, eat a plate full of pasta, and bike up and down the town’s biggest hill—and team up with her for this year’s race. She especially wants to beat Ercole Visconti (Saverio Raimondo), the cup’s five-time champion and Portorosso’s resident bully. Luca and Alberto stay with Guilia’s family, which includes her father Massimo (Marco Barricelli), a gruff, one-armed fisherman who knows a lot about killing fish, and an incredibly suspicious cat named Machiavelli who would fit right in with Studio Ghibli’s colorful cast of creatures.

The more Luca stays above the water, the more he becomes enchanted with it; Giulia, like Alberto, opens it up to him, albeit with more accurate information on topics like the larger universe, and soon something as foreign as school starts to sound appealing. But the fear of Giulia, her father, and all of Portorosso rejecting him—or worse, attempting to kill him after learning he’s a sea monster—still lingers.

Luca is a celebration of the underdog, accepting yourself, and the simple pleasures of life (largely depicted with pasta good enough to eat) that is packaged in a cool, low-stakes story. The conflicts might resolve a little too easily and some of the plots are spread a little thin, but that doesn’t mean it isn’t also enjoyable to spend 90 minutes exploring a small Italian town with Luca, Alberto, and Giulia. Despite its smaller scope, especially in comparison to other Pixar works, Luca is a worthy addition just the same.

Luca is now streaming on Disney+.