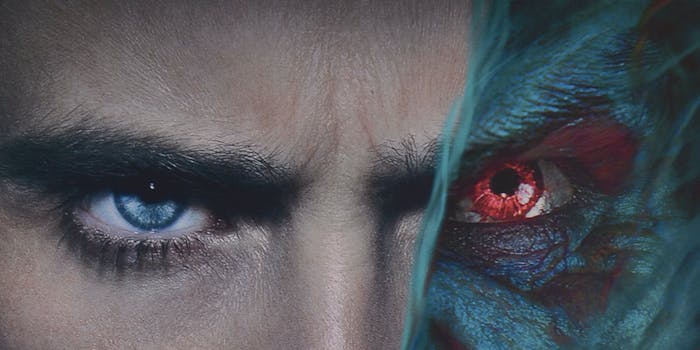 Why is everyone making fun of ‘Morbius’?

It won the box office, but on social media, it's seen as a joke.

Morbius, the newest Marvel film from Sony starring Jared Leto as the titular living vampire, made $39.1 million in its opening weekend, a number that shot it to the top of the box office. But between an abysmal reception from critics, plenty of ironic reactions from audiences, and pushback against reviews perceived to be particularly harsh, the movie is proving to be a meme goldmine.

Even by the standards of a major blockbuster plagued by delays, Morbius’ arrival in theaters last Friday had a surreal feeling to it. Originally set to debut on July 31, 2020, it was pushed back several times because of the Covid-19 pandemic and the occasional release calendar shuffling. There was a nearly two-year gap between the release of Morbius’ teaser trailer in January 2020 and the first full-length trailer in November 2021, a gap that’s both understandable (why would you market a movie whose release date might change a couple of weeks later) and led to some people jokingly asking if Morbius was even real.

For nearly two years, all we had of Morbius, a film centered around a Spider-Man villain who had little name recognition outside of comic book fans, was a nearly three-minute teaser that invoked a remixed version of “Für Elise” that looked and felt like it would’ve fit right alongside the aesthetic of the Ben Affleck Daredevil or Spider-Man 3. Add in Jared Leto, a polarizing actor with extremely off-putting method acting choices, and an ongoing pandemic, and Morbius may be a tough upsell. (And that’s before you add in the calculation by some audiences of whether it’s a movie worth seeing in theaters in the middle of a pandemic.) On the heels of Spider-Man: No Way Home’s monumental success, Morbius’ marketing highlighted its Marvel ties with one tagline reading, “A new Marvel legend arrives.”

The end result, as many of the reviews painted it, was not good. Rotten Tomatoes has the film sitting at 16% (the audience score is much higher at 70%) while the Metacritic score is 36, which means “generally unfavorable reviews.” One critic called it “the worst Marvel superhero movie in a long, long time” while other reviews and reactions highlighted shoddy editing and story choices, a blandness, and a hamfisted attempt to tie it into a cinematic universe it might not ever get to play in.

Before its release, the prevailing joke was that Morbius had such a nonexistent audience that you could just give away tickets. Even some early screenings showed theaters with few viewers in them.

While plenty of people saw Morbius in theaters, you didn’t need to in order to make fun of it and even post fake spoilers.

A manipulated image placing Martin Scorsese—whose criticism of Marvel movies has drawn the ire of for years—in front of a Morbius logo accompanied with a fake quote even went viral. But it might’ve been too good of a Photoshop because the photo made it onto Morbius star Tyrese Gibson’s Instagram page. (It’s since been deleted.)

But perhaps the response that induced the most eye-rolling among some fans and critics was a Hollywood Reporter column about the critical reception of Morbius. Written by Richard Newby, the column highlights some of the criticism while noting that he’s troubled by the idea that some critics and audiences were actively rooting against Morbius because it wasn’t released by Disney or directly under the MCU umbrella. (Sony owns the rights to Morbius.)

“What I find troubling is the number of critics and potential audience members who’ve been inclined to trash this movie since it was announced, taking to social media to repeatedly voice their disdain at the very concept of a studio other than Disney making a film about a character they’re unfamiliar with,” Newby wrote.

Newby’s column was quickly ratioed on Twitter, where Morbius’ marketing was highlighted as the reason why people judged the film well before it came out; another was Leto himself. But a more overarching reason, emerged: Marvel movies have such a grasp on popular culture, often to the detriment of most other films in theaters, that Morbius can handle some tough criticism.

The thing about the negative reception of Morbius isn’t that, at least for viewers, it has anything to do with who released the movie. It’s just not a very good film; sometimes, it’s pretty simple. But it also won the domestic box office and made over $84 million worldwide, so Morbius is doing just fine.