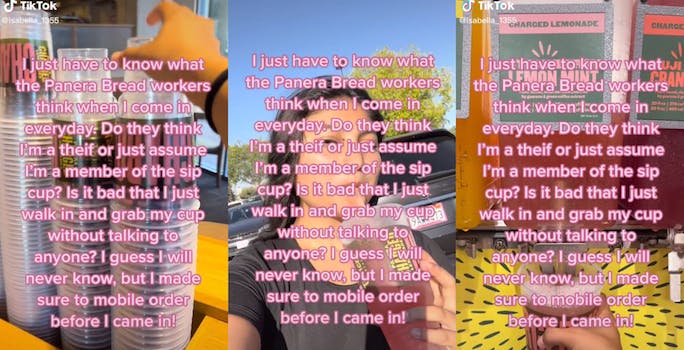 'As an employee, I have stopped caring if people have placed an order or not.'

A Panera Bread Sip Club member says she wonders whether the workers think she is “a thief” or “a member” in a now-viral TikTok video, sparking debate about enforcing the semi-unlimited beverage subscription offered by the company.

In the video posted by TikToker Isabella (@isabella_1355) on June 8, the creator walks into Panera Bread, grabs a cup, and fills it with “charged lemonade” without interacting with a worker.

“I just have to know what the Panera Bread workers think when I come in every day,” Isabella wrote in the text overlay, expressing a similar worry as another Sip Club member. “Do they think I’m a thief or do they just assume that I’m a member of the sip [club]? Is it bad that I just walk in and grab my cup without talking to anyone? I guess I will never know, but I made sure to mobile order ahead of time.”

Several Sip Club members appear to feel this way, as another creator shared a rather similar worry when grabbing her coffee from the chain on June 1.

Isabella’s video has amassed over 117,000 views as of Monday, with several alleged Panera Bread workers in the comments explaining how they handle Sip Club orders.

“Where I [work], if you mobile ordered a drink we put the empty cup on mobile shelf w receipt,” one user said.

“As someone who works at Panera, most people do come up to the counter or order cup as rapid go… but I’ve seen a few people just go through lol,” another wrote.

As part of Panera’s Sip Club policy, members are supposed to mobile order ahead of pick-up, but other alleged workers admit to “not paying attention” to who grabs a cup.

“As an employee, I have stopped caring if people have placed an order or not. I probably see someone take a cup 30 times a day,” one commenter wrote.

“I worked at Panera and we truly did not pay attention to anything like that, if you asked for a cup we just handed you one,” another said.

“As a Panera worker, we do not care,” a third added.

However, other users are frustrated with the lack of enforcement, fearing that Panera will end the program if too many people grab drinks without a Sip Club membership.

“And now people will just walk in and take without actually having sip club they will cancel it for everyone… thanks,” a commenter said.

The Daily Dot reached out to both Isabella and Panera Bread via email.