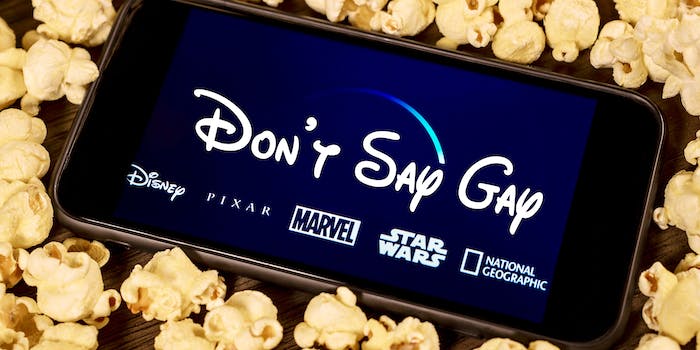 'Nearly every moment of overtly gay affection is cut at Disney's behest.'

The scandal around Disney and the “Don’t Say Gay” bill continues to grow, as Pixar employees accuse Disney of unilaterally opposing queer content in Disney-Pixar projects. This revelation arrived in the form of a letter from “LGBTQIA+ employees of Pixar and their allies,” shared in the newsletter Popular Information.

The letter reiterates that Pixar staffers feel betrayed by Disney leadership due to the company’s support of Florida’s Don’t Say Gay bill. This piece of legislation will ban Florida teachers from discussing gender identity or sexual orientation in elementary schools, and Disney has donated money to all of the bill’s sponsors.

Disney CEO Bob Chapek compounded the controversy last week by saying that Disney supports the LGBTQ+ community through “the inspiring content we produce.” A number of Disney employees—including high-profile creatives—responded with harsh criticism, accusing Disney of funding homophobic policies while hypocritically claiming to be a queer-friendly brand.

This new letter from Pixar staff accuses Disney executives of habitually removing queer content from Pixar projects. “Nearly every moment of overtly gay affection is cut at Disney’s behest, regardless of when there is protest from both the creative teams and executive leadership at Pixar.”

This lines up with recent behind-the-scenes scandals like the cancelation of Nimona, a queer-friendly animated movie that was canceled mid-production when Disney acquired its studio in 2021. The Owl House, an acclaimed cartoon series that was praised for its LGBTQ+ representation, was also abruptly canceled in 2020, with showrunner Dana Terrace blaming a Disney executive who decided The Owl House “didn’t fit the brand.” Terrace spoke out against Disney’s support of the Don’t Say Gay bill last week, saying “working for this company has got me so distraught.”

These stories conflict with Chapek’s comment about “inspiring content,” drawing a line between onscreen representation and government policies like the Don’t Say Gay bill. Disney employees are alarmed by their employer pouring money into such legislation, a sentiment echoed by the Human Rights Campaign (HRC).

On Wednesday Chapek pledged a $5 million donation to the HRC, but the HRC publicly refused the money, releasing a statement saying, “The Human Rights Campaign will not accept this money from Disney until we see them build on their public commitment and work with LGBTQ+ advocates to ensure that dangerous proposals, like Florida’s Don’t Say Gay or Trans bill, don’t become dangerous laws.”

The Daily Dot reached out to both Disney and Pixar via email.