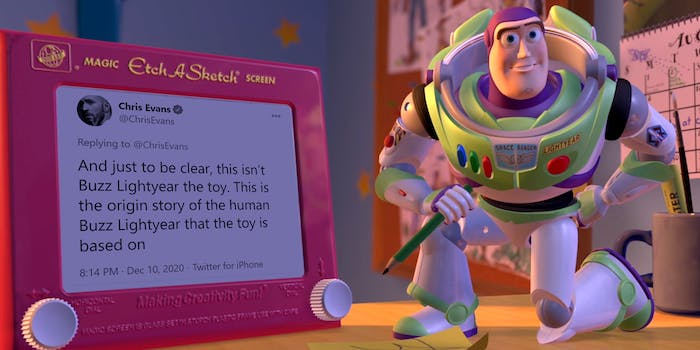 Disney announced a truly terrifying amount of new content last night, and amidst the chaos, Chris Evans popped in to assure us his upcoming Buzz Lightyear standalone film “isn’t Buzz Lightyear the toy. This is the origin story of the human Buzz Lightyear that the toy is based on.”

While there were many confounding announcements, Lightyear, in which Evans will voice the Toy Story character previously voiced by Tim Allen, seemed the most unnecessary. But something about Evans’ Buzzsplaining—and the inescapability of Hollywood’s idea-recycling—created a perfect meme format.

These are all in jest, of course. But don’t be surprised if you actually see a trailer for a gritty Cap’n Crunch origin story in three years. Or the Coen Brothers’ take on the Woody origin story in two.