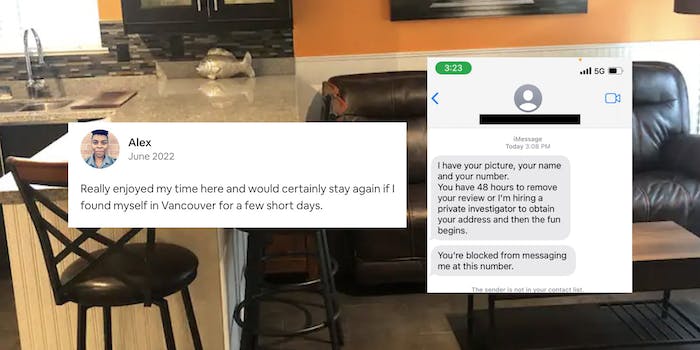 ‘I have your picture, your name, and your number’: Professor says Airbnb host threatened to track her down over 4-star review

'You have 48 hours to remove your review or I'm hiring a private investigator to obtain your address and then the fun begins.'

A professor is going viral for a horror story about being threatened by an Airbnb host over a four-star review. The tale joins a rising tide of complaints about the company.

Airbnb rates are often significantly lower than traditional rentals and hotels, plus it offers a wider variety of options and easy online booking. After its 2008 founding, Airbnb swiftly became a dominant force in the short-term rental market. Hosts and guests alike sang its praises.

What began as a trickle of complaints about negative experiences has intensified in recent years. Scarcely a week goes by without someone sharing a tale of hidden cameras, hostile and intrusive hosts, chore lists, excessive fees, and other nightmare scenarios.

Over the weekend, Alex Moore (@Dr_AlexM) shared her harrowing experience.

Moore, whose bio describes her as an assistant professor at the University of British Columbia, said that a host threatened her for leaving a four-star review. (The highest review is five stars.)

“In the interest of my own personal safety as well as public safety, @Airbnb @AirbnbHelp: Can you explain to me and everyone else why the host who sent me this message is still active on your platform? This person is clearly a threat and should not be allowed to host guests.” Moore tweeted.

She included a screenshot of a text message the host allegedly sent her.

“I have your picture, your name and your number,” it said. “You have 48 hours to remove your review or I’m hiring a private investigator to obtain your address and then the fun begins.”

The message adds that Moore is blocked from replying.

Moore said that her four-star review of the property in Vancouver, Canada included a positive message. She included a screenshot wherein she wrote about enjoying the stay and said she’d stay there again.

“The host has contacted me at my personal number with increasingly threatening texts because my review brought their average rating down from a 5 to a 4.95,” she said.

She added that she’d contacted Airbnb, as well as local police, who said they’d send an officer over to tell the host to leave her alone.

“They may also revoke his license to participate in house-share programs,” she said.

Moore reported that her initial experience with Airbnb support left much to be desired. After she complained, she said she received an apology and a promise to connect her with the proper entity. The following day, according to her tweets and screenshots of their correspondence, Airbnb support responded with almost the exact same message.

“This is the same sentiment that was sent yesterday,” Moore replied. “Please take meaningful action as soon as possible.”

She then spoke with a member of the company’s safety team, who promised to look into the matter.

The following morning, Moore said Airbnb had removed the property.

“It’s confirmed that his listing has been taken down! I will continue to follow up with @AirbnbHelp regarding next steps,” Moore tweeted Sunday morning.

The comments on her thread were overwhelmingly sympathetic. Some offered advice, such as reporting the host to the local short-term rental licensing department.

Many shared Airbnb horror stories of their own. Their tales echoed others that have gone viral in recent years, such as harassment from owners, hidden cameras, and excessive fees.

Several said that they’re going back to traditional rentals.

“I will be cancelling future booking and staying back in hotels. They don’t charge outrageous cleaning fees or stalk you if you give them an honest review,” wrote one.

One offered an explanation for why anything less than five stars is considered a negative review.

“I think one reason why hosts tend to take reviews so seriously is because Airbnb apparently pulls listings that fall below 4.5. I got this message from a host explaining this,” commented @vrdn_23.

Some feel that this means that Airbnb’s reviews are inherently misleading.

Update 8:3pm CT: Following publication, an Airbnb spokesperson told the Daily Dot via email, “After a thorough investigation during which the host was suspended, we’ve now removed the host and his listing entirely from Airbnb in accordance with our community policies. We’re thankful to Dr. Moore for bringing this to our attention.”

Airbnb said that they’d found no prior reports of similar behavior from the host.