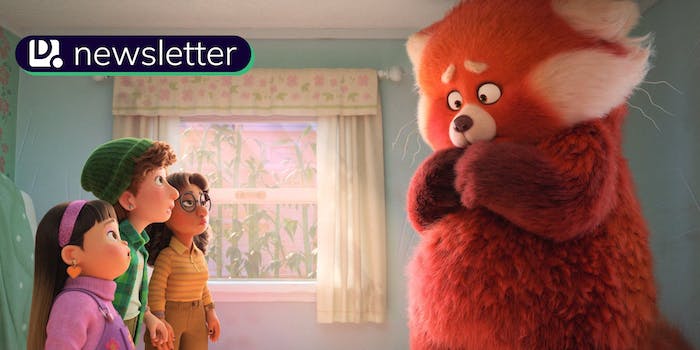 We’ve got a lot going on today, so I’ll keep it brief. We’ve got essential reports on a massive cyberattack, how Gettr is trying to snatch up Twitter’s web traffic, and how a company’s massive HR fail was exposed by a viral video.

Meanwhile, in her “Now Streaming” column, our Culture Reporter Michelle has an in-depth look at Pixar’s Turning Red and the discourse that has surrounded it in certain corners of the internet.

Let’s dive right into the news.

Big Tech-ish: Gettr, the social media app created by a former Trump advisor as an alternative for conservatives who felt stifled by big tech platforms, is now letting its users cross-post… to a big tech platform. As Claire, our politics reporter, notes, Gettr’s subscribers got an email recently telling them about how they can now cross-post to Twitter.

Cyberattack: Numerous government websites in Israel were targeted by a distributed denial-of-services (DDoS) attack on Monday. The cyberattack is being described by some as the largest-ever cyberattack against the country. Mikael, our tech reporter, dives into it more in-depth here.

Uncanny Valley: The decision by ABC sitcom The Goldbergs to use a combination of old takes, off-camera dialogue, and clever camera tricks to insert Jeff Garlin’s character into the show has a lot of people online feeling uneasy. Garlin departed the show amid an HR investigation into inappropriate on-set conduct, and our Culture Reporter Michelle dives into the online discourse about how the show has tried to continue having his character in it.

‘Turning Red’ and the highs, lows, and cringe of being 13

For the past couple of weeks, a certain part of the internet has been having an utter kinipshit over Turning Red, the latest Pixar film from Oscar-award winning director Domee Shi (Bao).

The film, which is set in 2002 Toronto, is centered on Meilin “Mei” Lee (Rosalie Chiang), a dorky 13-year-old Chinese-Canadian who is eager to please her overbearing mother Ming (Sandra Oh) and geek about about her favorite boyband, 4*Town, with her friends.

But upon hitting puberty, Mei transforms into a giant, fluffy red panda whenever she has strong emotions about something. Mei’s new ability (or curse, as her family sees it) is a giant metaphor for puberty, but puberty isn’t just subtext: When Mei first finds out, she tries to hide it from Ming, who thinks that Mei started menstruating.

Ming is so prepared for Mei’s first period that she has a box of Ibuprofen, vitamin B, a hot water bottle, and pads at the ready; she also gives Mei a thermos full of herbal tea. She’s a lot less prepared about Mei turning into a red panda despite the family disposition.

“[T]his movie is actually is for 13-year-old Domee that was in a bathroom, horrified, thinking that she had crapped her pants,” Shi told Uproxx. “And too afraid to tell her mom or ask anybody about what was going on. It’s so weird because it happens to every woman, every girl, but you just don’t hear about it or talk about it and it’s awkward and crazy, but we all go through it. But in that moment you feel so alone. So, it’s just my attempt to just help these girls and women feel seen in that way.”

It’s the kind of thing that we rarely see in most movies, and it’s practically unheard of in a kids’ film, but even the mere mention of menstruation has been enough to get some parents offended because they feel that the mere mention of menstruation is too adult of a conversation topic for young people to hear about. (12 is the average age for getting your first period in the U.S., but some children can start menstruating as young as 8 years old, according to the Mayo Clinic.)

It’s just another layer to the biggest criticism lobbed at Turning Red: That a movie centered around an unabashed Chinese-Canadian teenage fangirl who doodles fanart of her favorite 4*Town singers as a merman from a studio known for making movies about toys coming to life, monsters a rat who cooks, talking cars, and dinosaurs is somehow unrelatable, a more niche film, and even cringe. And even with some more inclusive and personal storytelling that is just as universal in recent years, Pixar is still limited in the kinds of stories it can tell.

For me, watching the discourse around Turning Red (and eventually watching the film itself earlier this week) have been something of a series of flashes down memory lane. I was 13 around the time that Turning Red is set, so good chunks of watching it felt like looking into a mirror.

When I saw Mei’s artwork, I flashed back to sketching Final Fantasy X despite having never played the game because a friend was into it. When Mei and her friends geeked out over 4*Town or drooled over the local clerk they had a crush on, I recalled the way that my friends and I would geek out and drool over the Lord of the Rings cast. As people recalled the cringey habits they did at age 13 like writing fanfic or their version of Ming discovering Mei’s doodles and the mortification that followed, I remembered the fanfic rabbit holes I dove down as a teenager.

I even have my own version of Turning Red’s pad scene (sadly minus the red panda transformation); when I told my mom that I remembered that incident, she responded with a simple: “You’re welcome.”

But even without all of the “hitting very close to home” vibes that Turning Red gave off, it’s such a fun film. It’s the closest that Pixar has felt like an anime, a film that wears its Miyazaki and anime magic girl influences on its sleeve.

It might touch on some things we’ve seen before, but Turning Red is also about being unashamed of who you are and figuring out who you want to be, a far cry from so much of the shame that came embedded in messages about going through puberty or getting older just a couple of decades ago. And on top of that, the music is great: I don’t know about you, but it’s going to be a while before I get those 4*Town songs out of my head.

Stories that remind you why it’s good to be single

Spending your nights and weekends on the couch solo? It’s okay to be by yourself, and these TV shows and movies will show you why. From rom-coms that play out like horror stories to marriages that you could not bear to be a part of, these stories make you glad you’re not stuck in these kinds of relationships (or situationships). Be single and be proud.

A TikToker went viral and confirmed the suspicions of many on the platform regarding grocery chain Trader Joe’s.

A TikToker has gone viral after sharing an apparent “work life hack” on the platform. The video shows a computer mouse being dragged by a Roomba automatic vacuum cleaner.

The revolution is here, and it’s non-alcoholic. *

When you think of the early days of the internet, what does that look like to you? In “The Lost History of the Internet” the Daily Dot explores the online communities and events that shaped us.

As if job hunting wasn’t frustrating enough, a TikToker recently posted a video where he showed how a company CC’ed him on an email where the employees where talking about how they didn’t want to hire him.

Now Playing: 🎶“Sign of the Times” by Steve Horner🎶