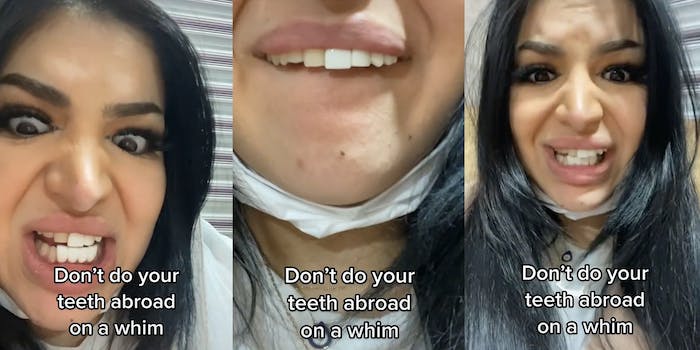 ‘If Claires did veneers’: TikToker urges viewers not to do ‘teeth abroad on a whim’ after getting hers done

She says the dentist asked her to marry him.

A TikToker shared a warning this week to viral success: Don’t get veneers abroad without conducting research.

In the TikTok posted by user Aida (@aida_azizii), she showcases her admittedly “on a whim” purchase: low-quality veneers.

Her video currently has over 9.3 million views.

In the video, Aida, who has over 100,000 followers, showcases the journey of getting her veneers, resulting in her teeth looking artificial and seemingly misaligned.

In the comments section, Aida herself compared the teeth to “piano keys.”

Several earlier TikToks reveal the full story behind Aida’s veneers, and, thankfully, the process of fixing them.

In the first video, Aida says she got the teeth on a visit to Iran.

Retelling her story, she claims that she got a recommendation for a dentist who had previously done a “cousin’s friend’s friend’s teeth.” She then says she did not look for additional information about the dentist.

Aida says that when she got to this dentist’s office, the actual dentist was apparently busy, instead telling his dental assistant to perform the procedure. This dental assistant also encouraged Aida to get the whitest color teeth possible, Aida adds.

After a while, she says the assistant needed to go home for the evening, at which point the dentist returned. Following some discussion, the dentist, Aida says, invited Aida to take a break to smoke shisha.

She says the two smoked for a few minutes before the dentist asked if she’d had Iranian fruit. Aida does not say how she responded but says he then left her alone in the clinic to get her Iranian fruit. All this time, she says her veneers were incomplete.

Once he returned, Aida says it became clearer to her that the conversation was more than simple chit-chat. However, she says she was still surprised when the dentist allegedly asked to marry her.

From here, Aida says she simply tried to get the dentist to finish her veneers, which were already not meeting her expectations. She says she was repeatedly told by the dentist and the assistant that they would look better once they were shaved down, but Aida says she still had reservations.

The dentist finished her teeth at 4am, she says.

The dentist, she alleges, said that she just needed to get used to the new teeth and that in a week’s time, her teeth would appear normal—and “that week, we can go out on our date,” she recalls him saying.

At this point, Aida says she simply went home. When she awoke the next morning, she says she found that the dental clinic blocked her on Instagram.

She says she called the clinic to sort out why she was blocked and asked if she could return to have her teeth further shaved down. While the dentist initially said yes, she claims, when she actually got to the clinic, she discovered the dentist was again absent, leaving her with his assistant.

Aida initially refused the assistant’s care, but she insisted, according to Aida. Eventually, Aida says she relented and allowed the assistant to work on her teeth. While she was working on Aida’s teeth, Aida says the assistant revealed that the dentist was, in fact, her fiancé.

Aida says she decided not to reveal her previous experience with the dentist to the assistant.

“I don’t care about the drama,” she explains. “I just want my teeth fixed.”

She says her teeth still turned out poorly, and despite her hesitance to get involved with drama, the assistant allegedly insisted on discussing her relationships over Instagram direct message.

Aida says she called the dentist, who allegedly insisted that she not talk with the dental assistant as “she’s crazy.” She says he also denied being engaged to her.

Following even more dialogue like this, Aida says she finally revealed to the assistant the true nature of her conversations with the dentist.

Unsurprisingly, she says this led to even more drama.

“Look at it! I look like a horse!” Aida says over images of her teeth.

Finally, Aida says she visited another dentist in Iran, who allegedly acknowledged what a poor job the previous dentist did and reshaved her veneers properly.

Unfortunately, Aida says he could not change the color, but after all this trouble, Aida says she’s not bothered.

However, there was somehow another development to this story. When investigating the dentist further, Aida says she discovered that the first dentist was just a student still in college.

“In conclusion, don’t be stupid like me!” Aida finishes. “Think before you do things! Don’t do an Aida!”

In a separate post, she shouted out the dentist who fixed her teeth, Dr. Hosseini.

TikTokers were justifiably in shock following this story.

As one user wrote, “All you wanted was your teeth done and he gave you a whole Eastenders episode.”

We’ve reached out to Aida via email.

Update 10:46am CT, June 24: In an email to Daily Dot, Aida says that she does not have further details beyond what is in her videos.

“I don’t think there were any other details,” she says. “My main takeaway is to not be impulsive! People have mainly messaged me to get details for the second dentist as they had a similar experience and really hate their teeth!”