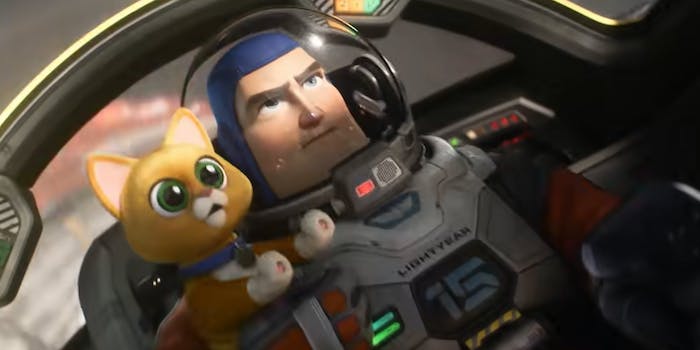 'Wow they really banned Lightyear here simply because of a same-sex kiss wtf.'

14 countries, including the United Arab Emirates and Malaysia, have announced will not be showing Disney and Pixar Studios’ Lightyear, a spinoff to the beloved Toy Story series. Social media users allege it’s because the movie features a same-sex kiss.

Meant as a prequel to Toy Story, the movie follows Buzz Lightyear’s career and adventures as a space ranger. One of Lightyear’s colleagues is a female space ranger named Hawthorne who marries another woman. One scene about their romantic relationship depicts a kiss between the two women.

Some of the other countries that banned the movie are Saudi Arabia, Indonesia, Egypt, and Lebanon. China may join the list—the country asked Disney to make cuts to the film, which were refused, according to the movie’s producer, Galyn Susman.

According to the Twitter account for the Media Regulatory Office for the UAE, the movie “is not licensed for public screening in all cinemas in the UAE, due to its violation of the country’s media content standards.”

“We’re not going to cut out anything, especially something as important as the loving and inspirational relationship that shows Buzz what he’s missing by the choices that he’s making, so that’s not getting cut,” Susman said to Reuters. However, in March, the scene was allegedly cut and then reinstated after allies and Pixar employees petitioned for it.

Disney’s recently released movie Doctor Strange in the Multiverse of Madness faced similar backlash for having a gay character named America Chavez. The superhero movie was also banned in some countries, including Saudi Arabia and Kuwait.

On social media, some people expressed frustration their nation banned the movie, especially since it means mainstream media representation for the LGBTQ+ community.

“Buzz Lightyear banned in 14 countries over lesbian kiss. Unfortunately not surprising but still disgusting,” another tweeted.

Lightyear is slated to be released on Friday.