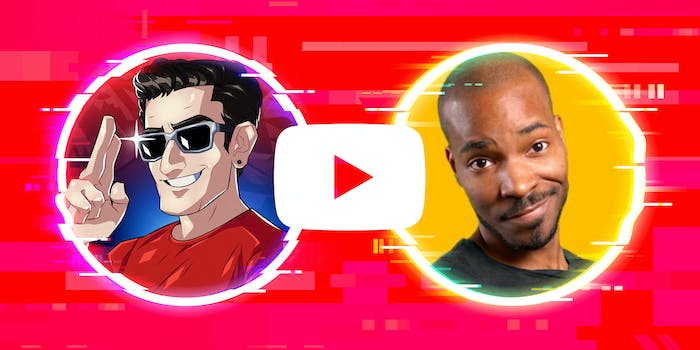 The Act Man had been criticizing YouTube for inaction over QuantumTV's alleged community guidelines violations.

On June 9, Kelly Van Achte, known online as the Act Man, tweeted that his YouTube channel was demonetized.  The cause wasn’t the months of a bitter back-and-forth feud between him and review channel QuantumTV, which involved Van Achte calling out the reviewer for harassing critics and his alleged past use of homophobic slurs. Rather, it was the consequence of a tweet Van Achte claimed was satire, one that threatened “to dox the families of YouTube employees & creators,” according to YouTube on Twitter.

The channel Van Achte built, with over 1.5 million subscribers accrued since 2013, is no longer able to make any income off of Google AdSense. It sparked a massive online backlash, with #JusticeforActMan pulling in over 100,000 tweets on Twitter over just one week and multiple creators with millions of subscribers chiming in.

In their eyes, and that of Van Achte in interviews with Passionfruit, YouTube failed to punish bad actors in its community and instead hoisted the algorithmic guillotine over a channel trying to expose a perceived injustice.

“I hope internal investigations are conducted to find out the reasons why all this happened and how all this stuff could be overlooked,” Van Achte said. “Why was action taken against me and not the anime villain?”

In mid-March, YouTuber QuantumTV, who has around 60,000 subscribers, released two deleted videos about the video game Elden Ring. He thought the title was “too difficult,” arguing that it was unintuitive and confusing to him. In a follow-up video responding to criticism, he said those that disagreed with him should “go kill yourself.” Other YouTubers soon started to clown on the review and the response, mocking QuantumTV for not understanding that the game’s difficulty curve is what made it successful, with over 13 million copies sold in just a few months.

One of those YouTubers was Mischief, a 17-year-old British content creator who only had around 2,000 subscribers. QuantumTV responded in a now-deleted comment on Mischief’s community post, writing that he would be issuing a “takedown” for using his “likeness in your thumbnail.” QuantumTV doubled down in a now-deleted video defending his actions claiming Mischief’s videos weren’t “fair use,” which caught the attention of larger creators.

A Digital Millennium Copyright Act (DMCA) strike on YouTube allows anyone who feels their content is being infringed upon to take it down. When used properly, it allows video or music owners to remove content that infringes upon their copyright that doesn’t fall under fair use. But the system can also be abused, allowing people to silence criticism and have videos potentially taken down. A creator can appeal, but they risk YouTube siding with the original striker or ending up in a court case. Three copyright strikes and your channel gets terminated, so the stakes are high.

“Copyright strikes are pretty much the worst thing you can do to another content creator, I think outside of doxing them and harassing their families,” Van Achte said. “When it comes to individual content creators, YouTube fully allows them to weaponize DMCA.”

That caught the attention of other creators, like Richard Masucci, who runs a 1 million-subscriber tech channel Review Tech USA, who posted three videos on the subject from March 15 to 19. These videos pulled in hundreds of thousands of views and the spotlight shined brightly on QuantumTV, whose past homophobic takes started to surface amid the controversy. Now-deleted tweets from 2018 saying “gay marriage needs to be shut down” and replying “why weren’t you a pulse victim smh,” referring to the 2016 shooting at Pulse Night Club in Orlando, Florida, started to get shared around social media.

QuantumTV then made more videos defending his actions and attacking his detractors, calling Masucci a “pedophile” and claiming that his social media accounts had been “hacked” when those offensive posts were created.

The Act Man steps in

On April 10, Van Achte made his own response to the whole saga which is currently sitting at 1.9 million views. He went over a lot of QuantumTV’s controversial statements and tweets, believing that this behavior, on top of the rampant copyright strikes, deserved some sort of punishment or ban from YouTube. In response, QuantumTV issued a copyright claim, though YouTube denied it.

This video set off another round of internet commentary from Van Achte on April 23, releasing an hour-long look at Quantum’s posts and history asking for YouTube to remove him from the platform, which has since been watched over 2 million times. After that video went live, Van Achte tweeted that QuantumTV had called his mother, which Quantum confirmed in his own follow-up video. Van Achte also claimed Quantum threatened to dox his family.

About one month later on May 31, Van Achte tweeted a response from YouTube that the platform did not find QuantumTV broke “any violations of our Community Guidelines” and that the “copyright suggestions made by the other creator were valid.” The next day, Van Achte released another video looking at QuantumTV’s history and YouTube’s response, which was taken down on June 7 for “nudity and sexual content.” Van Achte confirmed to the Passionfruit that the cause was a single image of cucumber in Quantum’s mouth.

“I feel like there was someone at YouTube that wanted to find any reason to get the video taken down and they just chose the most hilarious one,” Van Achte said.

On June 8, Van Achte tweeted that his entire channel had been demonetized. Van Achte told the Passionfruit that his partner manager at YouTube had told him the news the day prior and that he made “90 percent” of his income from ad revenue.

“The idea that someone at YouTube can at will push the destroy livelihood button, that’s a very scary thought for me and for everyone else,” Van Achte said.  “You might make an edgy joke and everything just falls apart after that, for something so simple and relatively innocuous.”

Still, the outpouring of positivity for Van Achte has allowed him to remain steadfast, even when unsure what his next project will be.

“I feel very humbled by the support and the reaction and I’m so happy about all of that,” Van Achte said. “Karma has all come back to me, in a good way.”