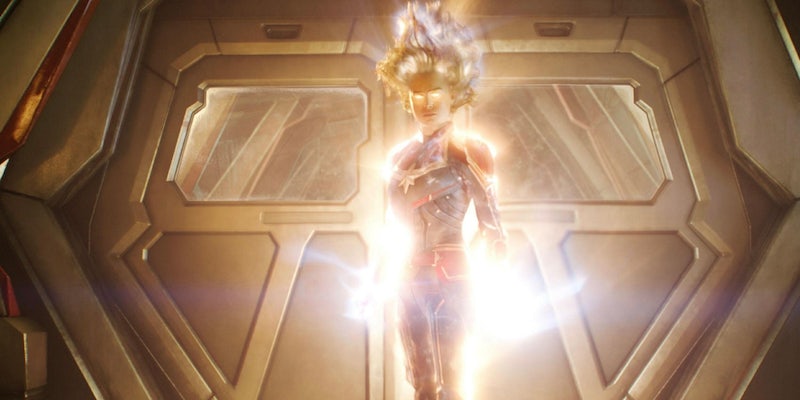 ‘Captain Marvel’s power source might be critical in ‘Avengers: Endgame’

It's an object that Marvel fans will be very familiar with.

Captain Marvel, like many of the films in the Marvel Cinematic Universe, is driven in part by the search for a powerful item. The item, the Tesseract, plays a vital role in Captain Marvel’s origin story—and MCU fans should find it more than familiar.

Midway through the film, Carol Danvers (Brie Larson)—who is still struggling to remember her life on Earth—reads a classified file for Project P.E.G.A.S.U.S. written by Dr. Wendy Lawson (Annette Bening) in the Kree language. In the file, Lawson discusses the Light-Speed Engine she had been developing and something called a Tesseract, which she had hidden in her lab. Carol soon puts it together that Lawson’s lab isn’t anywhere on Earth—it’s in space. And Lawson, who Carol and Maria Rambeau (Lashana Lynch) worked with in the Air Force, is actually a Kree operative living on Earth named Mar-Vell.

Carol and Nick Fury (Samuel L. Jackson) initially believe Talos (Ben Mendelsohn) and the Skrulls are looking to use the Tesseract to destroy civilizations, but they eventually learn that Talos doesn’t care about the item itself. He’s just looking to find his family so they can help escape the wrath of the Kree.

As a potential weapon, the Tesseract is something of a red herring in Captain Marvel. None of the characters use it as such in its current form, and it’s moved from one container to another, even though some characters definitely want to use it as a weapon. Captain Marvel showcases even further just how tied the MCU timeline is to the Tesseract—and the Infinity Stone.

The Tesseract is instrumental in Captain Marvel’s origin story

In 1989, Mar-Vell created an engine that had the capacity to travel at the speed of light. She intended to give the engine to the Skrulls, who were trying to hide from the Kree because the Skrulls wouldn’t submit to their rule. Carol and Maria both took part in the project as test pilots, and when Mar-Vell wanted to run a test, Carol volunteered. Mar-Vell told her that the engine could end wars.

But as they ran the test, they were shot down by a Starforce aircraft flown by Yon-Rogg (Jude Law). Mar-Vell tried to destroy the engine but was shot before she could do so. In her final moments, Mar-Vell revealed to Carol who she really was and ordered Carol to destroy the engine. And when Carol did so, she absorbed the energy from the powerful blast.

The interpretation differs from Captain Marvel’s origin story in the comics, in which she’s hit by an explosion and obtains powers. In the film, the powerful energy comes from a device powered by the Space Stone. This gives Carol an intricate link to the larger MCU—and incredible powers.

Six years later, Carol learned what really happened Yon-Rogg found her, as well as the extent of her powers. She was much more powerful than she knew because she was being held back—literally—and can fly on Earth and in space, destroy weapons and ships, and go binary.

Meanwhile, once Carol, Fury, and Maria find the Tesseract in Mar-Vell’s lab, they give it to Goose (the creature who looks like a cat but is revealed to be a Flerken) for safe-keeping—at least until he hacks it up.

Before Captain Marvel, the Tesseract had already appeared (in one form or another) in seven MCU films, more than any other Infinity Stone. Between Captain Marvel and presumably Endgame, it will add two more. While a couple of those are mere mentions or visions, it’s evident that the Tesseract has gotten around quite a bit. Its history on Earth, Asgard, and beyond spans decades.

The Tesseract first appearance in Captain America: The First Avenger. Before then, it was teased in a Thor post-credits scene. Johan Schmidt (who later becomes the villain Red Skull) has his eyes set on it. He wants to use it to create weapons to attack the U.S. during World War II, but once the Tesseract is awakened, Red Skull is banished to Vormir and keeps watch over the Soul Stone until Thanos arrives to take it in Avengers: Infinity War. The Tesseract goes under the Arctic along with Captain America, where it’s discovered by Howard Stark.

Howard Stark gives it to S.H.I.E.L.D., and we hear nothing about it for decades. We presume it’s the kind of thing you’d only know about with top-level clearance, given that Fury had no idea what it was despite being a S.H.I.E.L.D. agent. At some point, the Tesseract ended up in Mar-Vell’s possession. It’s not clear whether she took it for her own use, if she received it from Howard Stark, or if it was considered a part of Project P.E.G.A.S.U.S. before Mar-Vell’s death in 1989. From then, we know what happened, thanks to Captain Marvel.

After Goose hacks up the Tesseract, it returns to S.H.I.E.L.D.’s possession until Fury tries to tap into the device’s power several years later. It’s discovered by Loki, who uses the Scepter to control others and get the Space Stone for Thanos, but he’s stopped by the Avengers. With Loki as his prisoner, Thor returns to Asgard with his brother and the Tesseract.

After Heimdell briefly used the Tesseract, the device lay dormant in Odin’s vault for several years until Loki grabbed it just before Asgard is destroyed in Thor: Ragnarok.

Loki uses it as his bargaining chip at the beginning of Infinity War. While he’s able to spare Thor from Thanos’ wrath, he isn’t so lucky after attempting to double-cross Thanos one last time.

What could happen when Captain Marvel faces Thanos?

Much of Endgame—and Captain Marvel’s involvement in it—is up in the air. But with Carol on the Avengers’ side, they might just have a shot at taking the Mad Titan down. How could that be? The source of her power might just do it.

To their credit, they all tried in Infinity War, but it just wasn’t enough. For much of Infinity War, Thanos is nearly unstoppable no matter how many Avengers he’s fighting. Doctor Strange controlling the Time Stone isn’t enough to stop him, and even Mantis putting him into a slumber doesn’t last long. But there is one instance in which a single superhero’s power is enough to stop him for a short time: Scarlet Witch holds him off long enough to destroy the Mind Stone powering Vision. (Unfortunately, Thanos uses the Time Stone to reverse what she just did right after.)

Scarlet Witch, like Captain Marvel, obtained her powers through an Infinity Stone. She and her twin brother Pietro were experimented on with Loki’s Scepter—which housed the Mind Stone before it was placed in Vision—by agents of H.Y.D.R.A. prior to Avengers: Age of Ultron and were the only two to survive those experiments.

The Light-Speed Engine’s blast should’ve killed Carol all those years ago. Instead, it imbued her with almost unfathomable powers, which she now has along with the Kree’s upgrades, including Yon-Rogg’s blood in her veins.

Even with five of the six Infinity Stones, Thanos was apprehended by Scarlet Witch’s power-infused abilities. He might have all of the stones now, but he might be even more screwed when he faces Captain Marvel. Not only is the extent of her power immense, but she arrived back on Earth after learning to control her powers for 20 years. Given that Thanos just evaporated one of her major links to Earth, Captain Marvel’s likely wrath in Endgame will be something to behold.