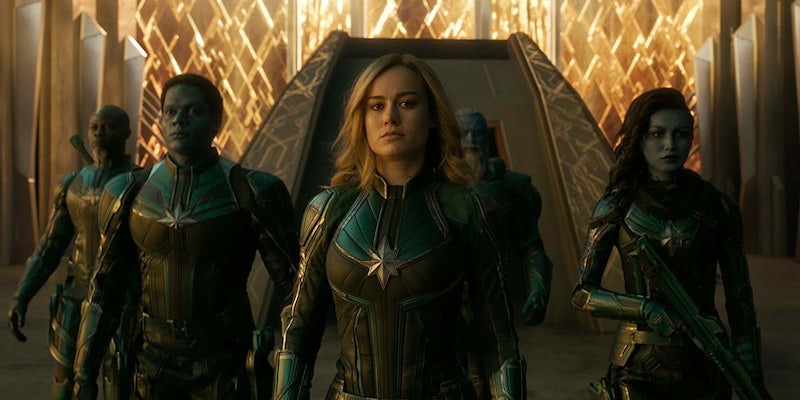 With a strong performance from Brie Larson but a formulaic Marvel tone, this movie shouldn't be as controversial as it is.

Once you’ve actually seen Captain Marvel, it’s wild to consider the amount of sexist backlash it inspired. Conservative trolls are acting like this film is two hours of Brie Larson draped in a Pride flag while reciting the Communist Manifesto, when in reality it’s a perfectly average Marvel movie. The main difference isn’t the presence of a female lead, it’s that the antagonist (Ben Mendelsohn) is a great standalone character instead of a one-note supervillain.

Sticking to the Marvel formula, Captain Marvel gives us funny quips, a classic hero’s journey arc, and a lead actor with the charisma to carry off some occasionally clunky dialogue. Predictably, the hand-to-hand combat scenes are excellent while the bombastic final battle sequence is somewhat uninspired. Captain Marvel’s feminist themes are no more in-your-face than Tony Stark’s daddy issues or Steve Rogers’ rocky childhood in Depression-era New York City. In other words, Carol Danvers’ gender plays into her origin story (as a female Air Force pilot in the 1980s, she obviously had to handle some bullshit), but this film doesn’t feature the multilayered political commentary we saw in Black Panther. Mostly, it’s about a cool hero in a leather jacket punching aliens with neon energy beams.

Danvers spends most of the film with amnesia, a conceit that gives the story a slow start. We know she’s a former Air Force pilot, but Danvers only remembers the last six years of her life, after she was picked up by the alien military commander Yon-Rogg (Jude Law). Since then she’s lived among the Kree, a race of blue-blooded warriors who previously had a minor role in Guardians of the Galaxy. They’re embroiled in an epic war with the shapeshifting Skrulls, a longstanding Marvel Comics storyline that Captain Marvel gives a clever new twist to. Written by Geneva Robertson-Dworet and directors Anna Boden and Ryan Fleck, the script occasionally lags with awkward exposition, but the overall concept is more interesting than its familiar premise: A bunch of aliens fighting over a power source.

After six years of loyalty to the Kree Starforce, Danvers gets a taste of freedom when she crash-lands on Earth. She’s hot on the heels of some Skrulls, but when she arrives in 1990s America, her memories begin to come back. Now things really get going, as she meets up with younger versions of S.H.I.E.L.D. agents Nick Fury and Phil Coulson, whose CGI de-aging ranges from believable (Samuel L. Jackson) to uncanny and plastic-looking (Clark Gregg).

If there’s one thing we know about Danvers from the first millisecond she appears on-screen, it’s that she’s cool as hell. Oscar-winner Brie Larson brings easygoing energy to the role, hewing closer to the jockish adventurousness of Thor than the self-conscious angst of Iron Man or Peter Parker. Whether she’s fighting Skrulls or teasing her mentor Yon-Rogg, there’s always a devil-may-care smirk hovering on the edge of her expression—the kind of cocky charm that Hollywood usually reserves for men. However, instead of being the Top Gun-esque Air Force propaganda the trailers suggested, the film mostly focuses on her time in Starforce, which made her fiercely loyal to one side of a war she doesn’t fully understand.

The standout members of the supporting cast are Fury, Skrull commander Talos (Mendelsohn), and Danvers’ best friend Maria Rambeau (Lashana Lynch). And, of course, the cat. Here Fury is more casual than the looming figure of the later movies, allowing Jackson to showcase his comic talents. He and Larson have instant chemistry, teaming up for a buddy cop partnership that’s less odd-couple than you might expect. Danvers may (kind of) be an alien, but she and Fury share a military background and a no-nonsense kind of banter. Like Mendelsohn, Jackson seems to be having a lot of fun with this role. At one point he even gets to sing.

In his natural state, Talos is a green-skinned alien with pointy ears and a strong Australian accent. When he’s disguised as a human, he looks like S.H.I.E.L.D. director Keller—ie. Mendelsohn. Instead of being an epic, doom-mongering supervillain like so many Marvel antagonists, Talos is an unexpectedly chill guy who may be the funniest character in the movie. Mendelsohn brings human (sorry) pettiness and sympathy to the role, bolstered by the film’s surprisingly nuanced view of the Kree-Skrull war. The Skrulls may be shapeshifting aliens who infiltrated human society, but they’re not just shapeshifting aliens who infiltrated human society.

Finally, we come to Rambeau. As fellow Air Force pilots and BFFs, Larson described Rambeau and Danvers’ relationship as the love story of the movie. I would’ve liked to see more flashbacks with them together; despite the amnesia and Danvers’ apparent death, I found their reunion lacked the urgency and anguish we saw with their predecessors, Steve and Bucky in the Captain America movies.

On the other hand, Rambeau and Danvers are less melodramatic than those guys. Rambeau lost her friend, but she’s a pragmatist with a daughter to raise. You can see why she and Danvers became fighter pilots; they’re both adventurous spirits who stay calm in a crisis. Speaking of which, Danvers didn’t get as many flight scenes as I expected—something that might have given Captain Marvel a more distinctive tone as an action movie. The one big piloting moment goes to Rambeau, in a sequence that echoes Star Wars as she dives between canyons, accompanied by a soaring fanfare.

Like Wonder Woman, the response to Captain Marvel has as much to do with real-life sexism as the actual quality of the film. Many women (including myself) found themselves crying during Wonder Woman, reacting to the sheer cathartic relief of seeing an inspiring female hero on-screen. Captain Marvel clearly resonates with some fans in the same way, but personally, I wasn’t really feeling it.

While I appreciate the theme of Danvers embracing her power in the face of gaslighting, it otherwise felt like a mid-range Marvel movie. Not as emotionally complex as The Winter Soldier or as creative as Black Panther, but certainly better than Doctor Strange. And that’s fine. There are enough female-led superhero movies in the works that they don’t all have to be masterpieces to prove some point about women in Hollywood.

Some people will find Captain Marvel heartbreakingly inspirational while others will view it as a shallow depiction of Girl Power feminism. I fall into the latter category, filing Captain Marvel away as an entertaining but unexceptional example of the superhero genre. My main takeaway is that Larson is awesome, and with Captain Marvel at the helm of future Avengers movies, the franchise is in safe hands.