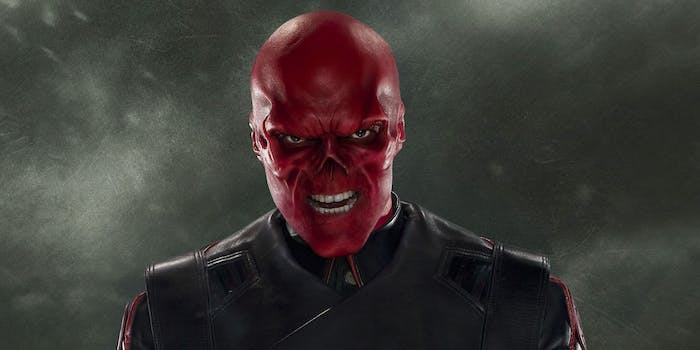 How did this dude wind up in space?

This post includes a spoiler for Avengers: Infinity War.

Avengers: Infinity War included a surprising number of unexpected cameos: Peter Dinklage as Eitri the Dwarf, Kenneth Branagh voicing an Asgardian distress signal, a sly Arrested Development callback featuring Tobias Funke. The weirdest was surely the Red Skull, a real blast from the past of the MCU.

The Red Skull—aka Nazi officer and HYDRA fanatic Johann Schmidt—is the villain of Captain America: The First Avenger. He’s essentially the opposite of Steve Rogers, because the supersoldier serum responds to a person’s strength of character. While the serum transformed Steve from sickly weakling to superhero, it made Schmidt into a monster. We all assumed he died in 1943, so it was kind of surprising to see him reappear in 2018, in space, and apparently intact.

The Red Skull’s cameo is a far cry from his original role. Now trapped on the planet Vormir, he fits right into the mythic side of Infinity War. For the past 73 years, he’s been guarding the Soul Stone as a poetic kind of punishment for failing to steal it himself. The Soul Stone requires the sacrifice of something you love, and since Johann Schmidt loved no one and nothing, he must spend an eternity as the Soul Stone’s doorkeeper. When Thanos shows up to steal it, Shmidt appears as a mysterious, cloak-wearing bearer of expository dialogue.

Despite speculation that Captain America‘s Hugo Weaving might return to the franchise, Infinity War‘s Red Skull was played by someone else. The Walking Dead‘s Ross Marquand provided his voice, which may explain why the Red Skull’s German accent has faded noticeably since he left Earth.

So, how did the Red Skull end up on Vormir?

If you read Infinity War‘s prequel comic—which, admittedly, most of us did not—you’ll already know the answer. Avengers: Infinity War Prelude flashes back to Captain America, when Johann Shmidt found the Tesseract (aka Space Stone) in Norway. He used it to power his army, before seemingly dying at the end of the movie. But instead of killing him, the Tesseract apparently transported him across the galaxy to Vormir.

This raises some questions about other elements of the MCU. For instance, if the Red Skull is still alive, does that mean Steve Rogers is also quasi-immortal? What about other characters who took a version of the supersoldier serum, like Bucky Barnes and Bruce Banner? Or can we just blame the Red Skull’s longevity on, you know, magic? Finally, does the Vormir subplot confirm a kind of conscious intent from the Infinity Stones themselves?

Narratively speaking, the Infinity Stones are a pretty basic MacGuffin. However, the Red Skull’s role suggests that they’re more like Mjolnir than, say, a bomb. In the same way that Mjolnir only allows itself to be lifted by someone “worthy,” the Infinity Stones seem to make judgments regarding their bearers. The Space Stone transported the Red Skull to the Soul Stone, and the Soul Stone punishes anyone who can’t provide a worthwhile sacrifice. And back in Guardians of the Galaxy, the Guardians basically channeled the Power Stone using friendship and teamwork.

In theory, this could open up some interesting avenues for Avengers 4. Could the next movie involve our heroes trying to win over the Infinity Stones by proving Thanos is unworthy?