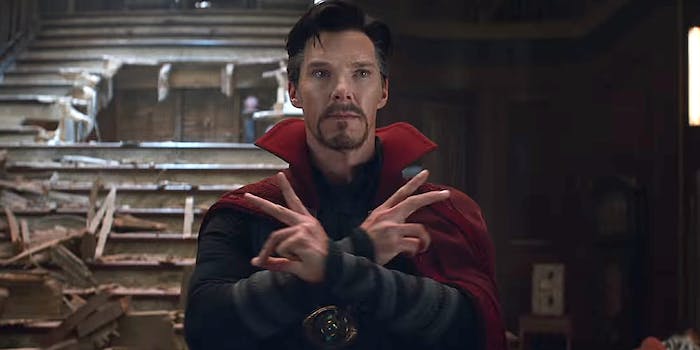 There's precedent for it earlier in the movie.

In the months since Avengers: Infinity War’s theatrical release, much has been theorized about Doctor Strange’s decision to give Thanos the Time Stone. And while many believe that choice was part of a bigger plan, there might just be another potential factor playing into that plan.

The theory, which was first posted to Reddit last week, posits that at some point during the Avengers’ fight against Thanos on Titan, Doctor Strange managed to curse the Time Stone, one that would enact once Thanos used all six Infinity Stones to turn half the universe into dust. It points to both Thanos’ damaged left hand, arm, and gauntlet after the snap as evidence that Thanos was cursed.

Is it possible to curse the Time Stone? We definitely know it is because we see the repercussions of trying to steal a cursed item earlier in the movie. During the fight in New York between Doctor Strange, Iron Man, and the Black Order, Ebony Maw’s hand was branded by the Eye of Agamotto early in the movie after he attempted to physically remove the stone from Doctor Strange’s body.

“It’s a simple spell but quite unbreakable,” Doctor Strange remarked. He also noted, after being caught in a bind by Ebony Maw, that “you’ll find removing a dead man’s spell troublesome.”

The redditor also points to the green runes that show up whenever Thanos uses the Time Stone—such as when he reverses time to bring Vision back to life long enough to obtain the Mind Stone—as an indication that something is up. It’s unclear if that’s a function of the Time Stone or an indication that something might be amiss, but it’s an interesting detail. The curse, if it exists, would have only been enacted after the snap, not for smaller manipulations of time.

Regardless of whether the stone is cursed, it almost certainly has to be part of Doctor Strange’s master plan. He saw only one way for the Avengers to win against Thanos out of 14,000,605 outcomes. And during that fight, he made some calculated choices such as giving Thanos the Time Stone to save Tony Stark’s life (after saying earlier that he’d choose to save the Time Stone over Tony and Peter Parker), even though he likely saw himself turning into dust as a result of it.

The pieces to obtain that victory are in place. Tony Stark and the original Avengers are alive, Captain Marvel has been summoned, Scott Lang is stuck in the Quantum Realm, and Thanos is nursing a damaged gauntlet and arm as a result of getting what he wanted. And there’s an entire movie to reverse those effects.

But did Doctor Strange curse the Time Stone? It’s hard to tell given how little know we know about how the Time Stone’s usage outside of Doctor Strange’s possession—and if the runes normally show up whenever its powers are used or if that’s a quirk bestowed on it—but if Doctor Strange tweaked a few things to make his plan work and damage Thanos in the process, we certainly couldn’t blame him for it.