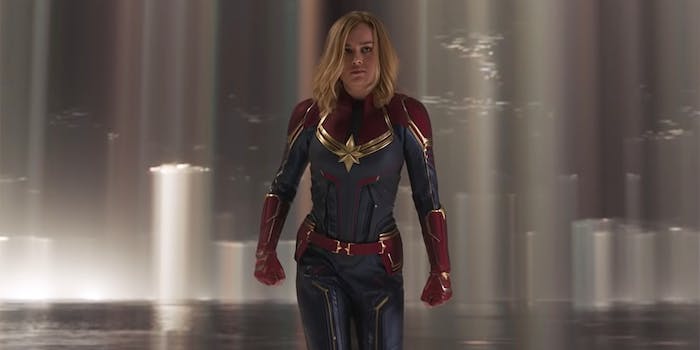 One of them has major ties to 'Avengers: Endgame.'

Captain Marvel, out in theaters today, weaves its way into the greater Marvel Cinematic Universe by linking to multiple films (particularly Guardians of the Galaxy) throughout its two-plus hours. But the film’s two post-credit scenes cement those ties even further, especially as one of them serves as a direct prelude to Avengers: Endgame.

Speculation on what had happened to Carol Danvers in the more than 20 years since the events of her film played out, and why she hadn’t been a major player in the MCU up until now, had been rampant. However, the explanation within Captain Marvel was a simple one: Having stopped Kree’s Star Force and her old mentor Yon-Rogg from obtaining the Tesseract, Carol left Earth to help Talos and the rest of the Skrulls find a new home while ending the war against the Kree. She gave Nick Fury his pager back—which she initially took away so that he wouldn’t call S.H.I.E.L.D. agents on her again—with some upgrades so that he can reach her up to a couple of galaxies away and told him to contact her in the case of an emergency.

But as it soon becomes apparent, the planet that Carol left behind had changed drastically since she inhabited it.

We don’t know how much time has passed since Thanos snapped half the universe out of existence, but it’s been long enough that four of the surviving Avengers—Captain America, Black Widow, Bruce Banner, and Rhodey—have been able to travel back to Avengers HQ from Wakanda. They’re in a room that we’ve seen in the Endgame trailer as Cap watches the tally of the global missing rise even higher. The number is constantly updating, but it’s massive. We’re talking trillions.

Fury and Maria Hill are both gone, but the Avengers have gotten their hands on Fury’s enhanced pager, which they’ve hooked up to a machine. The signal has stopped sending even after bypassing the battery, but Steve Rogers wants it to be broadcast again. Although Bruce questions what it might be, Natasha is on Steve’s side; she wants to know who’s on the other end of the pager. But before they can do that, Carol drops in with longer hair than she had in the rest of Captain Marvel and a slightly different version of her uniform; her shoulder pads are gold.

For that answer, Carol will have to wait until Endgame. And much of where she’s been and what she’s been up to in the last 20-something years is still up in the air. We don’t know whether she was able to find the Skrulls a new planet to live on and end the war against the Kree, or how far away she was from Earth before Fury paged her. But if she was in any way near Thanos’ reach when he obtained all of the Infinity Stones, she likely saw his wrath firsthand.

And the Avengers will have plenty of questions for her. But as we saw in Captain Marvel, Carol is more than up to the job of joining that fight.

The second post-credits scene—the one that plays after all of Captain Marvel’s credits roll—is shorter and simpler, but it still provides an instantly relatable moment for just about any cat owner.

At some point after the events of Captain Marvel, Goose, who’s taken up residence in Fury’s office, hops onto his desk. And the mighty flerken who helped take out a Kree army and swiped Fury’s left eye is about to hack up something big. He ate quite a few things and people in the film, so you feel for him when something doesn’t sit well. (And like any typical cat, of course, he does it on the one place that would be most inconvenient.)

What does he cough up? Fortunately, not any of the Kree he consumed—that would’ve been really messy—but instead the Tesseract itself, which he swallowed for safe-keeping earlier in the film.

Once he gets rid of the Tesseract, Goose seems completely fine; he’s even grooming himself afterward. And as far as we can tell, there were no side effects of having consumed it. But now that it’s out of his system, Fury was able to keep it with S.H.I.E.L.D. so that he would have access to it by the time he introduced the cube to Erik Selvig.

Skip past a few Marvel films, and the Tesseract, which is holding the Space Stone, switching hands a few times, and we all know how that ended up.