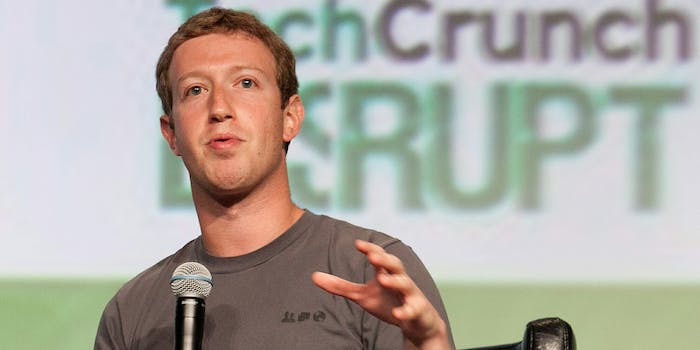 He's reportedly going to try and push his regulation ideas in Washington.

Facebook CEO Mark Zuckerberg is trying to make his voice heard amid calls from lawmakers to strengthen regulation on the internet.

Zuckerberg wrote an op-ed for the Washington Post this weekend where he laid out what he believes are the most pressing areas for regulation online: “harmful content, election integrity, privacy and data portability.”

“I believe we need a more active role for governments and regulators,” he wrote. “By updating the rules for the internet, we can preserve what’s best about it—the freedom for people to express themselves and for entrepreneurs to build new things—while also protecting society from broader harms.”

In the op-ed, he also said he agreed with the European Union’s General Data Protection Regulation (GDPR), adding that he believed it could serve as a “common framework” for countries.

“New privacy regulation in the United States and around the world should build on the protections GDPR provides,” he wrote. “It should protect your right to choose how your information is used—while enabling companies to use information for safety purposes and to provide services.”

Zuckerberg’s comments come as some major political figures have floated the idea of breaking up big technology companies.

Sen. Elizabeth Warren (D-Mass.), a 2020 Democratic presidential hopeful, called for breaking up companies like Amazon, Google, and Facebook last month, saying they had “too much power over our economy, our society, and our democracy.”

However, as Axios reported on Monday, Zuckerberg will likely be talking to lawmakers in Washington, D.C. to push for his regulation ideas, and not Warren’s.

Kevin Martin, the social media giant’s vice president of U.S. public policy, told the news outlet that consumers would not benefit from regulations like the ones Warren has called for.

“And I think that to the extent that there are concerns about some of the specific issues, like the content issues, or our use of data, I think we should try to address those directly, but I’m not sure that proposals to break up any particular company in and of themselves are going to address any of the policy concerns around privacy or content moderation or how we should approach elections,” he told the news outlet.

The Facebook CEO’s calls also come just days after the Department of Housing and Urban Development (HUD) announced a lawsuit against the company, alleging that it let advertisers engage in discriminatory housing practices.