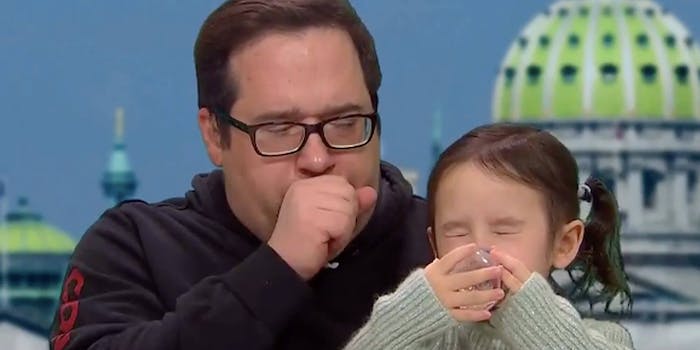 People are grossed out.

An interview with a father and daughter who were recently quarantined after coming in contact with the coronavirus has people on edge about how effective any attempts to contain the virus actually are.

After Annabel coughed in front of the medical staff at the San Diego airbase, where they were staying, they were quarantined once more by request of the Center for Disease Control (CDC).

Both Wucinski and his daughter appeared on Fox News Friday morning, where he assured everyone their tests for coronavirus had come back negative. However, his inability to stop coughing throughout the interview caught the attention of viewers at home, who weren’t convinced he should have been released into the general public.

The early symptoms of the coronavirus (COVID-19) are very similar to that of the flu, namely fever and coughing. For both Wucinski and Annabel to come down with coughs shortly after spending time with someone who died from the disease would put anyone edge.

But perhaps even more concerning than the coughing was the casual display of how easy it is for people to spread germs. Throughout the segment, Wucinski made contact with his daughter after coughing into his own hand, and the two shared a water bottle–actions that would spread a common cold but could have much more deadly consequences if someone were infected by the coronavirus.

“Someone should tell him it’s not safe to drink out of your child’s water bottle & give it back to her, when you’re obviously sick,” wrote one Twitter user.

Again, Wucinski insists his and Annabel’s tests all came back negative for COVID-19, so while it’s unlikely that the two of them are infected or will infect others, it’s clear that the threat of a fatal disease somehow isn’t enough to encourage folks to be cognizant of proper hygiene to keep themselves and others safe.

And that is anything but reassuring right now.