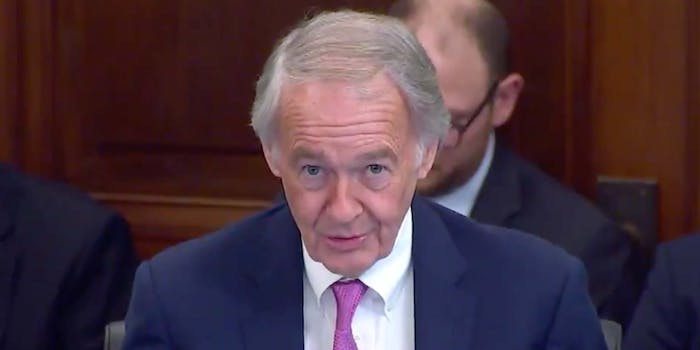 'No one should be allowed to reap a windfall from fear and human suffering.'

Sen. Edward J. Markey (D-Mass.) called on Amazon to fight back against price gouging on Wednesday amid the coronavirus outbreak.

In a letter to Amazon CEO Jeff Bezos, Markey noted that sellers on the e-commerce market have begun capitalizing on fear of the virus by drastically increasing prices on everyday items.

“As the world confronts the prospect of a serious and far-reaching pandemic, cororate America has a responsibility to precent profiteering on the sales of items such as hand-sanitzer and surgical masks,” Markey wrote. “No one should be allowed to reap a windfall from fear and human suffering.”

A report from USA Today on Tuesday found that a two-pack of 12-ounce bottles of Purell hand-sanitizer was being sold for as much as $149. One container of Clorox disaffecting wipes was even listed at $44.25, not including the $14.59 shipping price.

Although Amazon announced last week that it had removed tens of thousands of listings that had significantly raised prices, Markey argued that the platform is still being flooded with price-gouged items.

“Internet-based retailers such as Amazon.com have a particular responsibility to guard against price gouging in current circumstances as consumers — who are finding the shelves of local brick-and-mortar stores bare, and who may wish to avoid venturing into crowded stores and shopping malls — turn to the internet,” Markey added.

An Amazon spokesperson told ABC News this week that the company’s rules forbid third-party sellers from engaging in price gouging.

“There is no place for price gouging on Amazon,” the spokesperson said. “We are disappointed that bad actors are attempting to artificially raise prices on basic-need products during a global health crisis, and, in line with our longstanding policy, have recently blocked or removed tens of thousands of offers.”

The senator went on to ask Bezos to explain how, among other things, Amazon identifies price gouging and how many warnings it has had to send out to vendors on the site.

The letter comes as concerns over the outbreak continue to grow in the U.S., where 153 confirmed cases have been reported as well as 9 deaths.