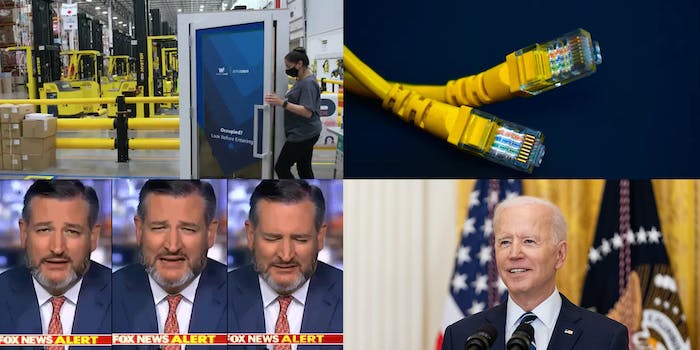 ‘This is some next level dystopian sh*t’: Amazon rolls out kiosk for overwhelmed employees to use

Known simply as the “ZenBooth,” the new apparatus, according to a video released by the company last week, is an “interactive kiosk where you can navigate through a library of mental health and mindful practices to recharge that internal battery.”

Footage of the ZenBooth shows a small fan, several small plants, and a computer reportedly filled with meditative videos.

Amazon has repeatedly come under fire for its working conditions, which has seen its drivers urinating in bottles and its warehouse workers facing a growing number of injuries.

Given Amazon’s notorious demands regarding its employees’ output, it remains unclear when and how often workers will actually be able to use the ZenBooth.

With Amazon’s history of criticism regarding its employees, the ZenBooth caught the attention of people online.

“why not just improve working conditions?” one Twitter user wrote. “Or you could pay your employees well, not treat them like garbage, and accept unionization,” another user added.

The Daily Dot reached out to Amazon to inquire about the ZenBooth but did not receive a reply.

Whether you’re a cannabis user or simply into alternative medice, there’s a good chance you’ve heard about Delta-8 THC. Unlike the Delta-9 THC found in what we think of as traditional pot, Delta-8 provides a milder experience. Think a cup of coffee to a cup of espresso. But that’s just the beginning.

How is Delta-8 different than traditional cannabis? Let our explainer walk you through the details.

Senate Republicans unveiled their latest infrastructure counterproposal as they continue to go back-and-forth with President Joe Biden’s administration—and they are sticking to the slimmed-down money for broadband.

In totality, the Republicans’ latest infrastructure offer is less than what the White House has sought. As for broadband, the newest proposal sets broadband funding at $65 billion, a number that the White House recently floated, billing it as way to compromise with Republicans and match their original proposal.

The White House’s original infrastructure plan proposed $100 billion for broadband funding that would be used to try and close the country’s digital divide. The funding would prioritize building in underserved and unserved areas; support for local-owned, non-profit, and cooperative broadband networks; and set aside money for Tribal lands.

But White House Press Secretary Jen Psaki told reporters that the White House had presented Republicans with a $1.7 trillion infrastructure package and framed it as the “art of seeking common ground.”  As part of that decreased proposal, the White House cut the broadband spending from $100 billion to $65 billion.

In their proposal on Thursday, Republicans noted that $65 billion would be set aside for broadband, which fits with the White House’s slimmed-down number and matches their first offer from back in April.

Sorry, that video of Ted Cruz eating a fly is fake

A resurfaced clip of Sen. Ted Cruz (R-Texas) went viral that appears to show him eating a fly during an interview on Hannity. It’s a fake, albeit quite a convincing one.

In the doctored clip a fly lands on Cruz’s lip, then disappears into his mouth. Cruz gags and takes a sip of water.

While it appears quite believable—not to mention gross—those who loathe the Texas senator will be disappointed to learn that the fly is merely a clever photoshop.

In the real clip from 2019, available online, Cruz coughs and takes a sip of water after Fox News pundit Sean Hannity asks him a question—about socialism, of course. There’s no fly to be seen.

Despite it being fake, many people took the bait. Twitter users were equally delighted and appalled to wake to #ToadCruz trending in the United States.