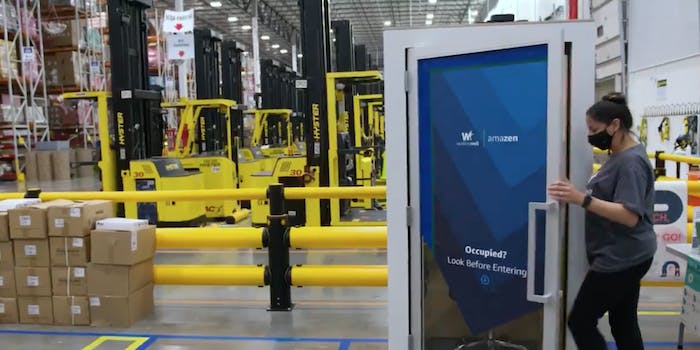 ‘This is some next level dystopian sh*t’: Amazon rolls out kiosk for overwhelmed employees to use

The phone booth-sized apparatus will let employees 'focus on their mental and emotional well-being.'

Known simply as the “ZenBooth,” the new apparatus, according to a video released by the company on Wednesday, is an “interactive kiosk where you can navigate through a library of mental health and mindful practices to recharge that internal battery.”

The ZenBooth is part of Amazon’s recently-announced WorkingWell Program, which aims to reduce workplace injuries by letting employees “recharge and reenergize” with a series of “physical and mental activities, wellness exercises, and healthy eating support.”

Footage of the ZenBooth shows a small fan, several small plants, and a computer reportedly filled with meditative videos.

Amazon has repeatedly come under fire for its working conditions, which has seen its drivers urinating in bottles and its warehouse workers facing a growing number of injuries.

Given Amazon’s notorious demands regarding its employees’ output, it remains unclear when and how often workers will actually be able to use the ZenBooth.

It also remains unclear whether the company actually plans to place ZenBooths in all of its warehouses or how many have been deployed so far.

The Daily Dot reached out to Amazon to inquire about the ZenBooth but did not receive a reply by press time.

With Amazon’s history of criticism regarding its employees, the ZenBooth caught the attention of people online.

“why not just improve working conditions?” one Twitter user wrote.

“Or you could pay your employees well, not treat them like garbage, and accept unionization,” another user added.

“This is some next level dystopian shit. Maybe just pay people more and let them have bathroom breaks,” one user chimed in.