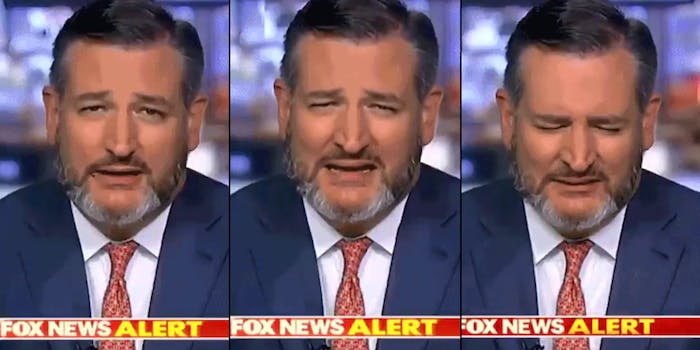 Sorry, that video of Ted Cruz eating a fly is fake

The video is going viral and sparking a hashtag, but it isn't real.

A resurfaced clip of Sen. Ted Cruz (R-Texas) went viral overnight that appears to show him eating a fly during an interview on Hannity. It’s a fake, albeit quite a convincing one.

In the doctored clip a fly lands on Cruz’s lip, then disappears into his mouth. Cruz gags and takes a sip of water.

While it appears quite believable—not to mention gross—those who loathe the Texas senator will be disappointed to learn that the fly is merely a clever photoshop.

In the real clip from 2019, available here, Cruz coughs and takes a sip of water after Fox News pundit Sean Hannity asks him a question—about socialism, of course. There’s no fly to be seen.

Many people still took the bait.

Much like former Vice President Mike Pence’s (real) fly video—easily the highlight of his debate against Vice President Kamala Harris—Cruz snacking on a Musca domestica inspired a hashtag #ToadCruz, which seems like a nickname that’s likely to have sticking power.

Twitter users were equally delighted and appalled to wake to #ToadCruz trending in the United States.

Historian Kevin M. Kruse kindly warned people to wait to see why it was trending until after breakfast. Few abided the advice.

One of Cruz’s many detractors who apparently fell for the video wished that former Rep. Beto O’Rourke (D-Texas) had beat him in 2018, so we might not have to see a video of Cruz eating a fly.

“#ToadCruz will probably find a way to blame his daughter,” they added, referring to when Cruz fled to Cancun earlier this year while Texas was in the middle of catastrophic winter weather.

Another simply wished for President Joe Biden would show up with a flyswatter.

Mostly people just made jokes, though, for what is the internet good for if not mocking politicians?

Since he actually had a real encounter with a fly on national television, Pence naturally featured quite heavily in the hashtag.

Cruz has yet to address the false rumor that he eats flies.