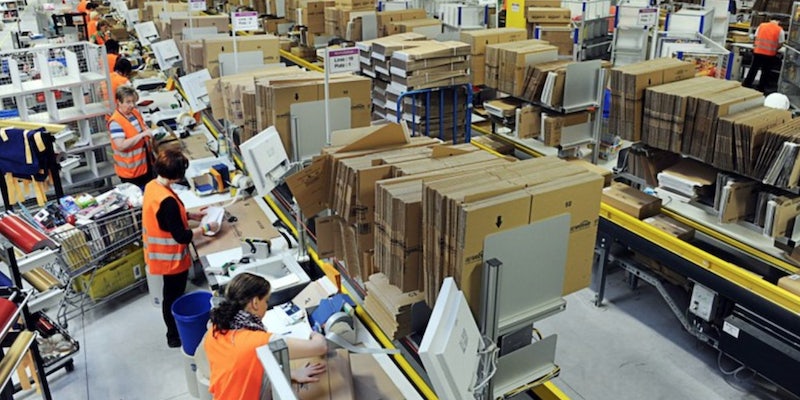 The records show that despite Amazon's assurances, workplace injuries continue to rise.

Internal Amazon documents are shedding new light on the dangers posed to workers inside the company’s warehouses and what the company knew.

The documents, obtained by the Center for Investigative Reporting, detail injury statistics for more than 150 fulfillment centers between 2016 to 2019.

Online media outlet Reveal, who released a lengthy breakdown of the records on Tuesday, argues that the documents prove that Amazon has “profoundly misled the public and lawmakers about its record on worker safety.”

Amazon, for example, has repeatedly defended its deployment of robots into its warehouses by arguing that it makes the job safer for employees.

But Amazon’s internal documents reveal that injury rates are 50 percent higher at warehouses with robots than those without them.

The company has also publicly argued that injuries do not increase on holidays or Prime Day, Amazon’s annual deal event for its Prime members.

Once again, however, the retail giant’s own records indicate otherwise.

Injury rates are shown to increase drastically in the weeks surrounding both Prime Day and Cyber Monday.

“The company’s injury rate went up every year from 2016 to 2019,” Reveal added. “Last year, the overall rate of serious injuries was 33% higher than in 2016, and nearly double the industry standard.”

Amazon’s statistics might be even worse than the documents show, Reveal says, given that evidence points to Amazon actively working to conceal some injuries “by using medical providers under pressure to deny workers proper treatment.”

The findings appear to match up with complaints from employees surrounding working conditions at the company’s warehouses.

In a statement on the documents, Amazon declined to discuss specifics but argued that worker safety was its top priority.

“Nothing is more important than the health and safety of our teams,” Amazon spokesperson Rachael Lighty said. “So far in 2020, we have committed over $1B in new investments in operations safety measures, ranging from technology investments in safety to masks, gloves, and the enhanced cleaning and sanitization required to protect employees from the spread of Covid-19.”

UPDATE 4:04pm CT, Sept. 29: In a statement to the Daily Dot, Amazon strongly refuted that it had misled anyone and pushed back on Reveal’s reporting by arguing that it had misinterpreted the alleged data.

“We look at a variety of metrics to evaluate the effectiveness of our safety programs, but Reveal is misinformed regarding an OSHA safety metric that measures days away and restricted or transferred work (known as a DART rate) as something the reporter mistakenly calls a serious incident rate,” an Amazon spokesperson said. “The reality is that there is no such OSHA or industry ‘serious incident rate,’ and our DART rate is actually supportive of employees as it encourages someone with any type of injury, for example, a small strain or sprain, to stay away from work until they’re better.”