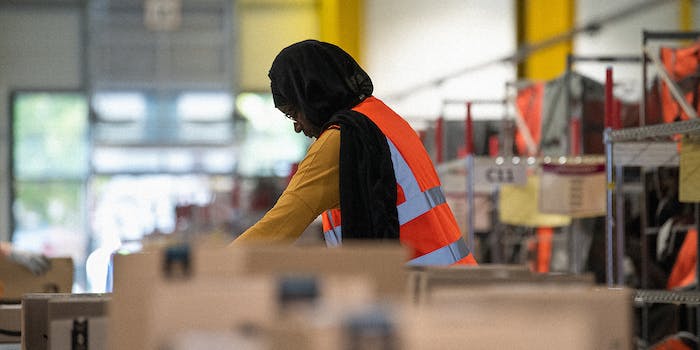 This was not the best PR strategy.

While reports of Amazon mistreating its employees have circled around the internet for years, the company finally addressed one of the biggest complaints about it, in a reply to Rep. Mark Pocan (D-Wisc.).

“You don’t really believe the peeing in bottles thing, do you? If that were true, nobody would work for us. The truth is that we have over a million incredible employees around the world who are proud of what they do, and have great wages and health care from day one,” Amazon News tweeted on Wednesday night.

The tweet came in response to Pocan’s accusation—from reports over the years—that the company makes workers urinate in pee bottles as to not take breaks on the job.

As many noticed online, saying “you don’t really believe” doesn’t amount to a denial.

“Paying workers $15/hr doesn’t make you a “progressive workplace” when you union-bust & make workers urinate in water bottles,” Pocan wrote in response to the company calling itself the “Bernie Sanders of employers.”

In response to the accusations on Twitter, many users brought proof Amazon wasn’t telling the truth.

“Just a fun fact but many UPS drivers, garbage truck drivers, and FedEx drivers have pee bottles too. Many long haul truck drivers do also. I’ve met many over the years. It’s why more women don’t go into those jobs more than likely. Not saying this is right though,” one user tweeted.

Another reply thread offered pictures taken by a former Amazon driver of a company policy that included cleaning out the vehicles after every shift and disposing of all urine bottles.

The company is possibly hiding behind these drivers being subcontractors and not actual Amazon employees when it dismisses the reports.

Still, people were not impressed.

“I’d rather wait one more week for my package and know delivery employees have good working condition. This is madness and results in packages being thrown around and left outside in panic (very understandably!). Nobody wants that,” another user tweeted.