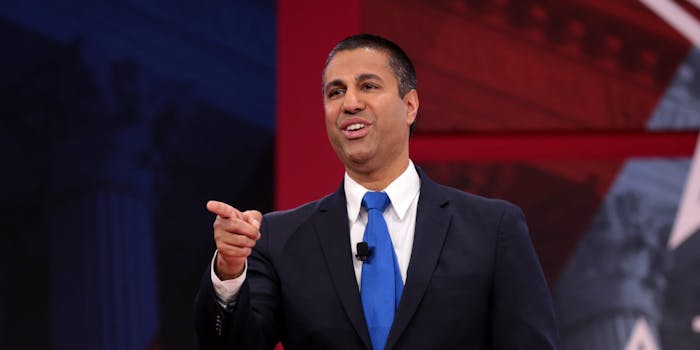 Advocates argued people who would need to comment were responding to the virus.

The period for the public to comment on portions of the Federal Communications Commission’s (FCC) net neutrality repeal has been extended because of the coronavirus emergency.

Last year the United States Court of Appeals for the District of Columbia Circuit released a highly anticipated decision stemming from Mozilla v. FCC, a suit that hoped to overturn the FCC’s repeal of net neutrality in 2017. In the decision, the court largely upheld the FCC’s repeal, but it also found that the agency couldn’t block states from enacting their own net neutrality laws.

Despite a push from pro-net neutrality groups, the court declined to rehear the case.

As part of its decision last year, the court also asked the FCC to reexamine how the repeal would affect utility pole regulations, public safety, and the Lifeline program—which helps lower-income Americans get internet service. As part of that process, the agency needed to seek public comment on those three issues, and the response so far has been strong.

Earlier this month a number of internet rights groups and net neutrality advocacy groups asked for an extension for people to make public comments citing “the staff, officials and line-level first responders who possess the knowledge necessary to respond to these questions are preoccupied with preparing for, and conducting, emergency responses to a public safety crisis of unprecedented magnitude brought on by the rapid spread of COVID-19,” according to Multichannel News.

On Wednesday, the FCC changed the deadline to comment. The original deadline for commenting was originally March 30, but it has now been extended until April 20.

FCC Commissioner Jessica Rosenworcel, a Democrat, said the commenting extension was “welcome,” but also thought that the extension should have been longer.

“Today’s extension of the period for public comment about net neutrality is welcome,” Rosenworcel said in a statement. “However, when it comes to collecting public feedback on what the FCC’s net neutrality repeal means when it comes to public safety and low-income consumers, an even longer extension would have been appropriate. The American public cares about net neutrality and should have every opportunity to let Washington know how important it is for every part of our civic and commercial lives.”

The FCC’s “Restoring Internet Freedom” docket had 7,008 filings in the last 30 days, with many of them commenting in favor of restoring net neutrality.