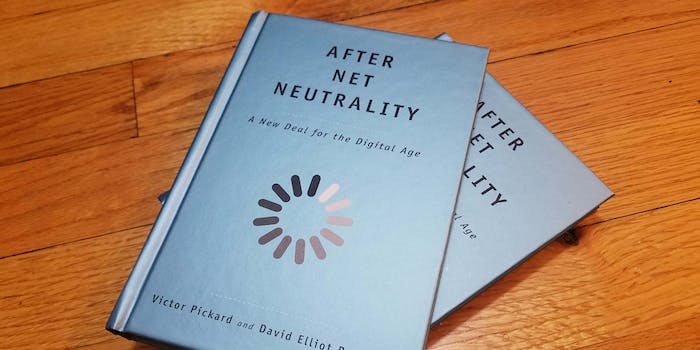 ‘After Net Neutrality’ book explores history, activism and offers an idea for the future

A new book tries to re-frame the net neutrality debate.

The debate about net neutrality has been a public-facing issue for more than a decade, with a dizzying amount of twists, turns, public outcries, enacting of rules, and ultimately a repeal.

Victor Pickard and David Elliot Berman try to slice through all of the issue’s dense history in After Net Neutrality: A New Deal for the Digital Age. The book recounts the history of the debate, the historical roots of it, and the impact of activism across the past decade before offering its own ideas of what needs to happen moving forward for an open internet.

The Daily Dot spoke with Berman, a doctoral candidate at the University of Pennsylvania’s Annenberg School of Communication, this week ahead of the book’s official release on Tuesday. The conversation has been edited and condensed for clarity.

We’re kind of dazzled and enamored with the internet, so we see the problems emanating from it as new and without much historical precedent. The way that the net neutrality debate is often talked about is kind of in an a-historical way.

One of the missions of this book is to kind of intervene in the debate and say what we’re seeing today—the battle over net neutrality—does have historical antecedents. It is largely about the ability of regulators, and governments, and public interest organizations to hold monopoly power to account, particularly in the realm of telecom, but also transportation—this is obviously where common carrier first came about in the United States.

A “common carrier” refers to a company that transports goods on behalf of people and are subject to strict regulations. When the FCC repealed net neutrality rules, telecommunication companies were no longer subjected to this classification.

And not to confront the monopoly power—that’s really not what common carrier is about and that’s not really what net neutrality is about for that matter–but to ensure within a monopolistic telecom or transportation system that there is a modicum of fairness, that there is non-discrimination that is enforced so that the owner of a network or transportation network can not leverage their ownership of that infrastructure unduly for profit.

So it’s quite important to be paying attention to the history, because when you look at the history, we are able to situate the net neutrality debate structurally.

2) Another thing that was really interesting to me was how the arguments on both sides of the debate, at least in terms of congressional action, have not really changed since net neutrality became less of a wonkier term and more of a public interest question. You detailed how the debate really hasn’t changed in terms of what they want and why. I was wondering if you felt the same way?

Generally speaking, both sides of the net neutrality debate, the language that they used to justify their position is kind of soaked in the language of the market with a primary concern about innovation.

Supporters of net neutrality throughout much of the last 15 years, although less so now, often framed their debate as ‘without net neutrality we would never of had Google or Facebook’ or ‘we won’t have the next Google or Facebook’ because the likes of Comcast can go to the next upstart and say ‘nice product you got there, it would be a shame if something happened to it’ and basically cripple them in their infancy by demanding that they pay them money in exchange for not slowing down their traffic.

So that’s kind of the consensus position, for a long time it was focused on markets, it was focused on business arguments for and against net neutrality. I think really what we’re trying to do with this book is expand the terms of the debate. To say ‘no it’s not just Comcast vs. Google, Comcast vs. Facebook, it’s not just a clash of the titans.’ This is a battle about democracy. It’s a battle about whether the internet will retain some modicum of openness that will allow ordinary people to make their voices heard in the public sphere and assert their collective will.

3) In the book you mention how the first kind of rallying moment for net neutrality supporters did have the backing of some of these ‘Titans’ you were talking about, but I think the debate has really shifted toward even more of a personal issue. Throughout the entire book you mention how activism was so important to the debate and how it will be moving forward.

Early in the net neutrality debate between 2005 and 2006 and up until a few years ago, advocates of net neutrality often found themselves in kind of these odd coalitions with the likes of Google, Facebook, and Netflix who—not because they had any principal investment in net neutrality, but because it was kind of in their business interests–supported net neutrality.

Now, in 2019, I think the kind of techno-Utopian moment has died down. I think while partnering with Google or Facebook 10 years ago had a certain political cache because they were seen as kind of progressive innovative organizations. I think today we have greater awareness of some of their more nefarious practices, and certainly public support for these organizations has gone down. So they no longer make for compelling allies in the net neutrality debate for activists.

Broadly on the topic of activism, I think our focus there is to kind of think about how the debate is depicted as this battle between elites—between presidents, and senators, and policy makers, and ISPs—and kind of approach it by also looking at the more bottom up aspects, the way that grassroots and activists have propelled the debate forward and the central role they’ve had.

These are kind of the perspectives that when we talk about the net neutrality battle are often sidelined in greater of kind of great man theories of how we got here.

4) Do you think that the high points would have been possible without activism? You mention in the book you thought the public outcry was probably the reason Tom Wheeler decided to go through with the 2015 Open Internet Order. You also give a lot of credit to John Oliver as being a kind of flash point. How important was activism to where we are today?

It’s critically important. In 2014-15, going back to that phase of the battle, Barack Obama was elected president with a strong mandate to implement net neutrality. Obviously things happened between 2009 and 2014… his investment in seeing net neutrality through very much waned.

It was really the activists, the organizations that were circulating petitions, that were calling into their congresspeople, that were making basically a big ruckus, these are the actions and these are the people, I think, we have to thank for the 2015 Open Internet Order, or at least the order that we got.

5) At the end of the book, it pivots toward ‘what happens next,’ or options for moving forward, and you argue a new New Deal is needed for the digital age. You offer a number of different examples, but to me the one you two seem to think is the best option is a “Fiber For All” idea. Why do you think that’s the best option?

We do ultimately think net neutrality is an important safeguard for preventing the likes of Comcast from encroaching on the public sphere. But we do also see it as a kind of flimsy policy, a kind of compromise policy which leaves the structure of the broadband internet market basically intact. It leaves Comcast, Verizon, Charter, AT&T at the helm of the broadband market acting as quasi-monopolists. Within that structure, it seeks to check and modify their behavior to prevent them from discriminating against internet traffic.

Really, we can see then that net neutrality is a symptom of this problem. It’s a symptom of the monopoly problem in broadband internet. If we want to create a net neutrality that is more durable, that isn’t ping-ponging back and forth between different FCCs and legislative bodies, we need to talk seriously about what to do about the underlying ownership structure of the broadband internet market.

We talk about anti-monopolising as an option, creating a more decentralized market for internet access that is more responsive to consumers so that internet users can punish ISPs if they engage in discriminatory behavior.

We also talk about municipal broadband as a potential alternative. We think there is good empirical research to show that, broadly speaking, municipal networks tend to work better for consumers than internet services that are offered by the telecom giants.

Municipal broadband is able to succeed despite the fact that it doesn’t operate on the same economy of scale as the telecom giants. Thinking about how we get a more public-oriented internet infrastructure, the question is how likely are municipal broadband initiatives to succeed? I think they face an uphill climb wherever they are fought. They require immense amounts of technical know-how, they require the willingness of a community to want to go forward with the initiative, they require lawyers because inevitably ISPs are going to lobby and sue municipalities that go forward.

So we think that scaling public broadband up from a local level to the state level is ultimately probably a more viable solution to fighting the political and economic power of the broadband giants.

6) I think ‘state-level’ is kind of coming up now in the wake of the court decision. The general consensus at the moment seems to be that the net neutrality battle for now will be fought on a state level. You just spoke about “Fiber For All” probably needing to happen on the state level. The open internet debate seems to be going on at the state level for the time being. What do you think of that?

There is a degree of experimentation and flexibility that is not possible when we’re talking about one size-fits-all federal level net neutrality legislation. I’d much prefer that we have that, but in its absence: California has come out with a net neutrality protection that is even stronger than what the FCC had in place. I think we could see greater experiments in terms of publicly owned broadband at the municipal or the state level as well. This is largely what Elizabeth Warren’s proposal is centering on.

So, the fate of net neutrality is in someways going to be dependent on who is in the White House and which party has a majority at the FCC. But until then, I think there are some interesting experiments to be done, and if they prove to be successful then they could be a viable model for the future.