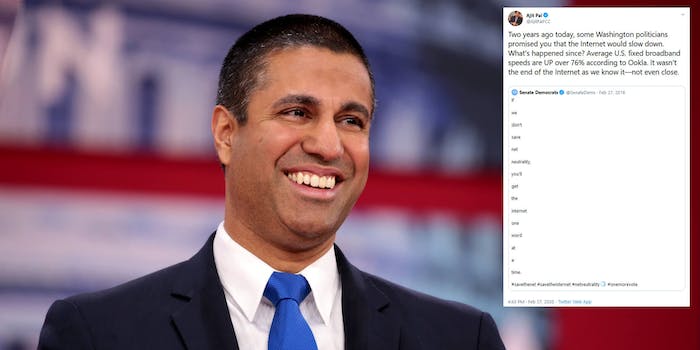 The FCC is asking for public comment on its net neutrality repeal once again.

What he didn’t tell people is that parts of his decision are up for public review.

“Two years ago today, some Washington politicians promised you that the Internet would slow down. What’s happened since? Average U.S. fixed broadband speeds are UP over 76% according to Ookla. It wasn’t the end of the Internet as we know it—not even close,” Pai wrote on Twitter on Thursday, referencing a Congressional Review Act (CRA) effort by Senate Democrats to overturn the repeal.

However, Pai’s remarks also came as hundreds of people are telling the FCC to bring the rules back as part of a public comment period that was required by a federal appeals court ruling last year.

In October 2019, the United States Court of Appeals for the District of Columbia Circuit released a highly anticipated decision stemming from Mozilla v. FCC, which sought to overturn the FCC’s “Restoring Internet Freedom Order” that repealed net neutrality in 2017. Despite a push from pro-net neutrality groups, the court declined to rehear the case earlier this month.

In its decision, the court largely upheld the FCC’s repeal, but did bring up several important caveats. First, the court found that the FCC did not have the authority to block states from enacting their own net neutrality laws in the absence of ones at the federal level.

The court also asked the FCC to reexamine how the repeal would affect public safety, utility pole regulations, and the Lifeline program, which subsidizes internet service for lower-income Americans. The FCC last week began asking for public comment on those three issues, and the response has been strong.

FCC Commissioner Jessica Rosenworcel, a Democrat, pointed out that the FCC was seeking comments last week, telling people it was “time to speak up.”

On Thursday, Rosenworcel once again pushed people to “speak up” on the docket.

“You might have missed this last week. The FCC asked the public to comment on #NetNeutrality. But it did it in a document that’s all legalese. It sure looks like the FCC is doesn’t want you to see it. Don’t let the FCC cover up. Speak up!” Rosenworcel tweeted on Thursday.

As of Friday morning, hundreds of new comments had been made on the FCC’s docket since the agency made its public notice on Feb. 19, with a majority of them appearing to be against the FCC’s net neutrality repeal in general.

The FCC’s “Restoring Internet Freedom” docket had 3,331 filings in the last 30 days, including a large number of comments posted over the last week.

Many of them want net neutrality to be restored.

“The public deserves a free and open internet, classified as a public utility, not a highest bidder wins system, as proposed by Chairman Pai,” a person from North Carolina wrote on Thursday.

“The principle of net neutrality is fundamental to restraining anti-competitive coalitions in the provision of content. Please restore net neutrality protections,” a person from Maryland wrote on Thursday.

The FCC’s public comment system has been plagued with issues and faced immense scrutiny leading up to the agency’s net neutrality repeal in 2017—with instances of dead people’s names being used to make comments and fraudulent comments being made in the names of members of Congress.

However, one study showed that of the non-fraudulent comments, nearly 100 percent of them were not in favor of the FCC’s repeal.

In November, the FCC pledged to replace the broken system.